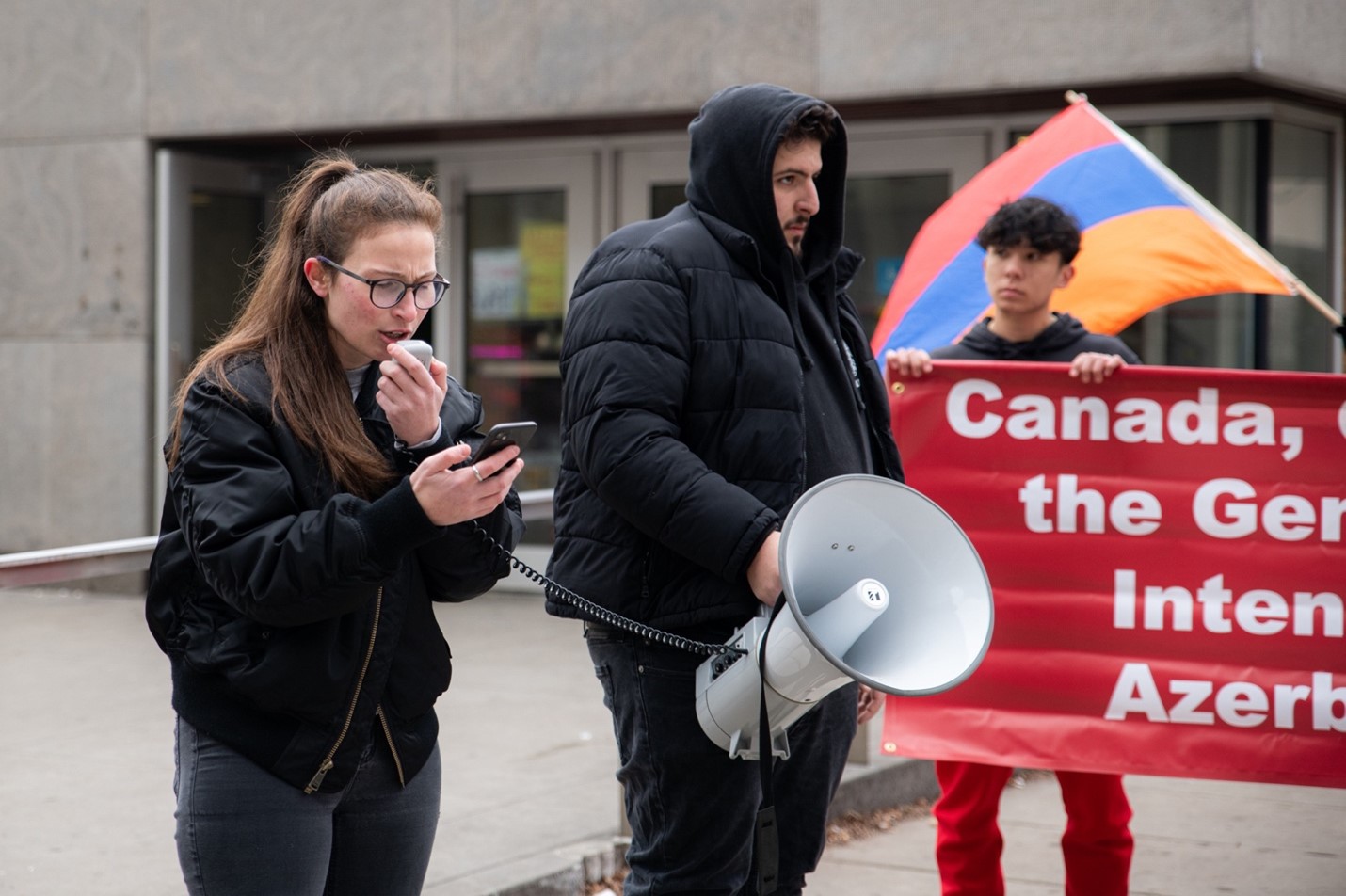 A group of demonstrators gathered at Toronto’s Nathan Phillips Square on Thursday calling for the immediate opening of the only road that connects Artsakh to Armenia. The road has been blocked for the 12th straight day by a group of Azerbaijanis claiming to be environmental activists.

The demonstrators gathered at the Toronto landmark also called on the Canadian Government to voice its outrage at Azerbaijan’s human rights violations and the Aliyev regime’s genocidal aggression. The Dec. 22 protest was organized by the Armenian Youth Federation (AYF) of Canada and the Armen Karo Students Association of Canada.

A group of Azerbaijani citizens, disguised as concerned environmentalists, continue to block the Lachin Corridor, the only route connecting the Republic of Artsakh to Armenia and the outside world. The road remains closed to all traffic, besieging the people of Artsakh and depriving them of receiving humanitarian aid and necessities. Local markets face food shortages, and hospitals cannot treat patients effectively as medical supplies run low. Around 1,100 citizens, including 270 minors, are currently stranded and unable to return home due to the closure.

Narod Kelebozian, who spoke at the Thursday afternoon rally on behalf of the AYF, said that the road closure is yet another example of the consequences of the relative silence of the international community. “The rest of the world must adopt a unified stance to condemn Azerbaijan and hold them accountable for their genocidal aggression,” she said in her remarks.

A group of human rights organizations recently issued a collective “genocide warning” for the population of Artsakh. “All 14 risk factors for atrocity crimes identified by the UN Secretary-General’s Office on Genocide Prevention are now present,” the groups, which include Genocide Watch, the International Association of Genocide Scholars, and the Baroness Cox-led Christian Solidarity International said in a statement.

“Canada was once an ardent champion of the R2P [Right to Protect] doctrine. What our friends and family are going through in Artsakh makes this doctrine very applicable. Canada must use all diplomatic tools to apply multilateral pressure on Azerbaijan to abide by its commitment to the ceasefire and the norms of international law,” said one of the attendees at the Thursday demonstration.

Another protester said that the only way to uphold the indigenous Armenian population’s fundamental human rights is to recognize the Republic of Artsakh. “The international community constantly calling on both sides to come to a peaceful resolution will not safeguard the future of Artsakh. We cannot find peace with a state that has exhibited terrorist behaviour time and time again,” she said.

Four days earlier, on Dec. 19, the Global Armenian movement, an international diasporan grassroots group, held another protest action in downtown Toronto. The group held signs urging the United Nations to speak out against Azerbaijan’s aggression and called upon Canada’s Ambassadors to the UN New York and Geneva to take action and help unblock what many have called Artsakh’s “Road to Life.” Demonstrators also passed out flyers with links to the roadoflife.info website to passersby.

“The post-war landscape of no-war-no-peace and human rights violations by the Azerbaijani people is among the primary concerns for Canadian-Armenians. A once vibrant country rich with flora, fauna, and cultural heritage sites is now in ruins and unable to rebuild as Azerbaijani forces continue to violate the terms of the Nov. 2020 ceasefire. Canadian-Armenians are asking the Government of Canada to partner with multilateral partners and hold Azerbaijan culpable for their aggression and violence towards a peaceful population on their indigenous land,” read a part of the statement released by AYF Canada following their Thursday protest.