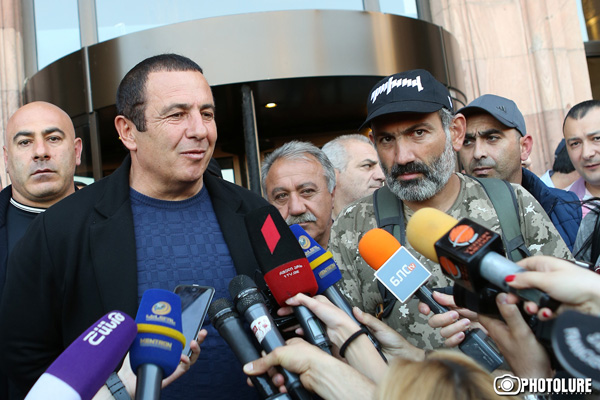 (Azatutyun)- Prime Minister Nikol Pashinian confirmed on Friday that businessman Gagik Tsarukian’s political alliance will receive ministerial posts in Armenia’s new government which is being formed by him.

“We have said that we are going to form a government of accord,” Pashinian said after chairing his first cabinet meeting in Yerevan. “We need to find the best personnel solutions and the Tsarukian Bloc will definitely be involved in the government.”

He did not give details of the impending power-sharing deal with Armenia’s second largest parliamentary force. Newspaper reports have said that the Tsarukian Bloc is eyeing the post of deputy prime minister and four ministerial portfolios. The tycoon and his political allies have not confirmed that.

Pashinian announced his ministerial appointment on Friday. He said Armenia’s current Minister for Emergency Situations Davit Tonoyan, who is not affiliated with any party, will become defense minister.

Pashinian thanked members of Armenia’s outgoing government in his opening remarks at the cabinet meeting. “The government is meeting in its current composition for the last time,” he said. “I wish all of you success. I also wish the incoming government success.”

Speaking to reporters after the session, Pashinian reaffirmed his plans to push for the holding of fresh parliamentary elections in a “reasonably shortest period of time.” But he again avoided giving possible dates for such polls. It remains unclear whether former President and Prime Minister Serzh Sarkisian’s Republican Party of Armenia (HHK), which still has a clear majority in the parliament, will agree to call them anytime soon.

The Tsarukian Bloc controls 31 seats in the 105-member parliament, compared with 9 seats held by Pashinian’s Yelk alliance. The 42-year-old premier is therefore expected to rely on Tsarukian for political support at least in the short term.

The bloc has been nominally in opposition to the Sarkisian government. It voiced support for anti-government protests staged by Pashinian after they rapidly gained momentum late last month. Sarkisian was forced to resign on April 23.

Tsarukian and the other deputies representing his bloc unanimously voted for Pashinian’s premiership in the parliament on May 8. The outspoken protest leader pledged to embark on sweeping reforms which will, among other things, separate business from politics and end chronic vote buying in Armenia.

Pashinian has charged in the past that not only the ruling HHK but also Tsarukian’s Prosperous Armenia Party hand out vote bribes during local and national elections. The tycoon, who is one of the country’s richest men, has always denied such allegations.

The relationship between the two men was even more troubled when Pashinian was the editor of the Yerevan daily “Haykakan Zhamanak.” In December 1999, Pashinian claimed that a group of burly men led by Tsarukian burst into the pro-opposition paper’s officers and beat up him and his male colleagues. The reported incident followed a critical “Haykakan Zhamanak” story on Tsarukian’s business activities.

In November 2004, Pashinian blamed Tsarukian for an arson attack that destroyed his car. Tsarukian, who was close to then President Robert Kocharian, denied any involvement.