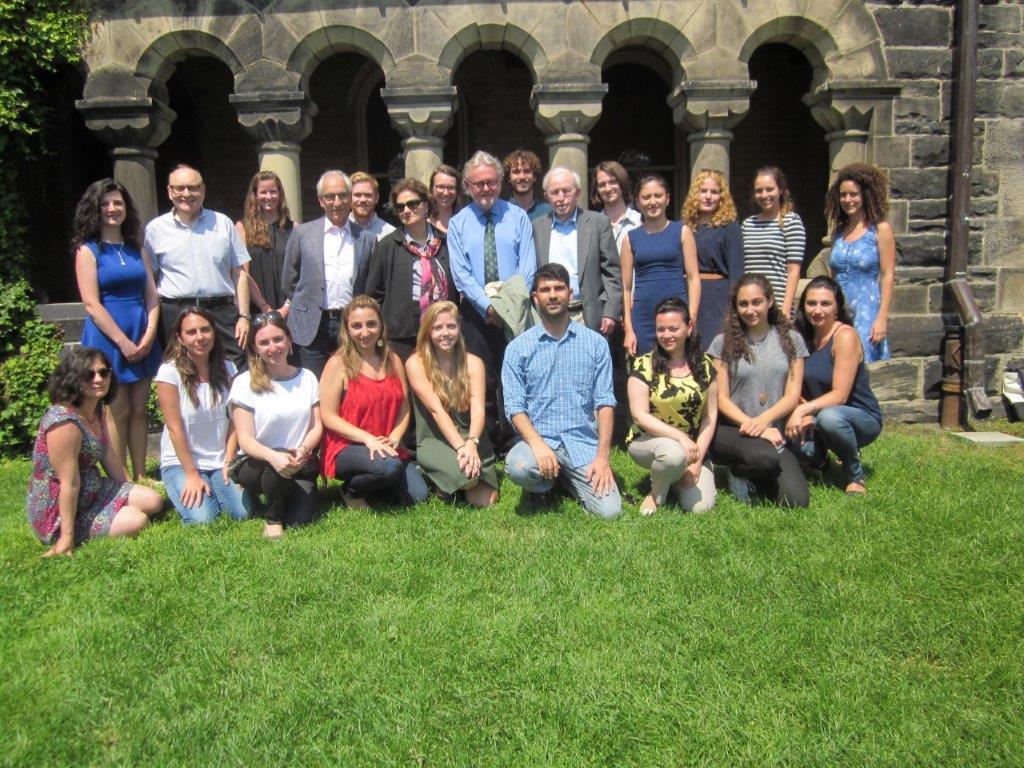 “A Genocide is not an accident; it is a choice. It occurs because human beings make it happen and let it happen” said Roger Smith, the Chairman of the Board of Directors of the International Institute for Genocide and Human Rights Studies’, in his closing remarks following the 2-week seminar recently held in Toronto.

The International Institute for Genocide and Human Rights Studies, a Division of the Zoryan Institute, conducted its 15th annual Genocide and Human Rights University Program (GHRUP) in partnership with the University of Toronto from August 1 to 12. Students from around the world come to the University of Toronto each year for a comprehensive course on genocide and human rights and leave empowered with the tools to understand and to help prevent genocide. “One of [the Institute’s] goals is to turn the emotional energy about the subjects, into an intellectual energy,” says Jessica Adach, Zoryan Institute’s Program Coordinator.

Joyce Apsel, the Course Director and renowned scholar and Master teacher, believes that part of the program’s value stems from its multidisciplinary nature.  “Specialists are brought into the program from the social sciences, to humanities, to international law and from different countries….it is an extraordinary opportunity for students to actually ask questions to different specialists,” said Apsel. “The faculty and the different voices that we bring have evolved over time, we shift things, we invite new people in, we want to keep changing and have new perspectives going on.”

This year’s class was composed of a diverse group of 18 students from countries including; Argentina, Armenia, Brazil, Canada, France, Iran, Israel, Turkey, and the United States. One student, a lawyer from Argentina, appreciated the course’s unique opportunity to learn from some of the most renowned scholars in the field:  “In my opinion, the GHRUP is highly recommendable. Not only academically, but also in emotional terms. The highlight of the course is the academic level of professors and especially the interdisciplinary profile of the program. Each day issues were addressed by professors from different disciplines (historians, lawyers, philosophers, anthropologists, etc.) with different methodological approaches. I lived the experience as a privilege: the possibility to be in direct contact with excellent professors who were always ready to answer our questions, suggestions, and doubts, and also support us when emotions overwhelmed.”

Professor William Schabas, a prominent law professor at Middlesex University in the United Kingdom and Leiden University in the Netherlands, taught the unit on international law and genocide. Schabas, like the students in the program, sees the immense value in the program, and how it serves as a method for challenging, reconciling and raising awareness of gross violations of human rights.  “I love coming for the program and if it means having to flying in one day and fly out that night I’ll do it,” said Schabas. “This is a very special course. I do a lot of teaching on summer courses that are there for university students and others who want to learn about specialized areas in human rights, but this is quite a unique course on genocide and it’s interdisciplinary. I think it makes a huge contribution. Education in this area is important…and I wish they had such a thing when I was a student. I never had such an opportunity.”

During this 2-week period, the students live and swap stories together at a dormitory at the University of Toronto. This intensive and collaborative immersion enables students to swiftly build friendships and breakdown geopolitical barriers. An anthropology MA student who traveled from Brazil to partake in the course had this to say: “My Armenian background was how I became interested in this field, because of my great-grandfather’s history. I see myself applying my newfound knowledge on the Armenian Genocide that I gained from the course discussions to my studies when I return home. My Master’s thesis was about the memory of the Armenian population in Brazil and the Genocide as the main feature of this memory.”

Another participant, an MA student from Israel, found that the course content was “immensely valuable for [her] research and also thought-provocative.” She especially found Dr. Bergen’s seminar on the Holocaust intriguing, adding: “Her (Dr. Bergen’s) pedagogical sense was evident which led me to learn a new way of teaching and understanding the Holocaust.”

A human rights activist and a Political Science and International Affairs graduate from the American University of Armenia, also had positive things to say about her experience: “With what I have learned in this course, I would like to spread awareness in the community as a way of prevention. As an Armenian, it is important for me to see that those crimes will never be repeated again.”

The University program was officially launched in 2002 in Toronto, Canada and has welcomed 418 students from over 40 countries since its inception. Kourken Greg Sarkissian, President of the Zoryan Institute, emphasizes how “the program seeks to help develop an academic support system for those who work toward the prevention of genocide. By studying the genocidal trauma of many different groups of peoples, the GHRUP strives to show that genocide is a shared human experience and as such, must be the concern of all individuals and institutions.” This program is a vehicle for young scholars to study with many of the best minds in the field, learning through an interdisciplinary analysis, the Jewish Holocaust, the Cambodian, Rwandan, Guatemalan Genocides, and the genocide of Indigenous Peoples, in comparison with the Armenian case, the prototype genocide of the 20th century.