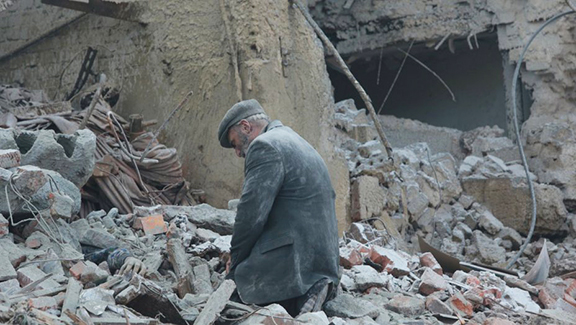 (Hollywood Reporter)—A dramatized recreation of one of the Soviet Union’s most devastating natural disasters — the Spitak earthquake in northern Armenia in December 1988 — has been chosen as Armenia’s submission for best foreign-language film Oscar consideration.

Earthquake tells the story of the massive quake that destroyed more than 300 communities and killed 25,000 people. Focused around the story of two young men, Andrey Berezhnov and Robert Melkonyan, whose fates were already intertwined by an earlier tragedy — a car crash caused by Andrey that killed Robert’s parents — the film brings them together in the same rescue squad as they struggle to cope with a disaster that eclipses their own personal stories.

Shot in Armenia and in Moscow on specially built sets — to spare the people of Gyumri (formerly Leninakan) the distress of recreating earthquake damage in a city where memories after nearly 30 years remain raw — the film, long tipped as this year’s Oscar entry from Armenia, beat two other shortlisted films in a secret ballot of the National Film Academy of Armenia.

In comments posted on his Facebook page, Dishdishyan wrote: “This is amazing news! Thank you very much to the [National Film Academy members] for their trust! We will try to justify it. We’ve still got a long way to go, but it’s a start. Thank you to all the filmmakers and participants in the movie and especially the director, Sarik Andreasyan.”