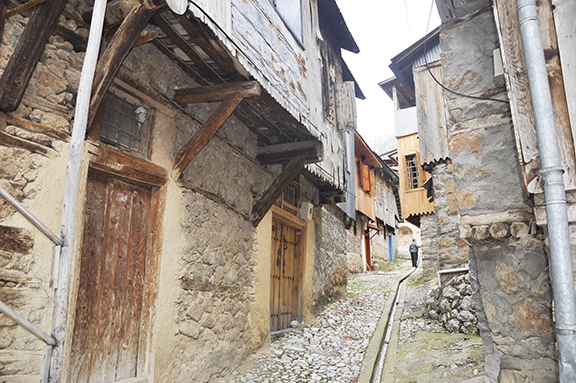 A few weeks ago, I visited Misak Medzarents’ (1886-1908) village, Pingean, near the city of Agn (current name: Kemaliye) in Turkey. As I walked in the narrow, cobblestone streets and alleyways of the village where the beloved poet was born, I kept looking at the century-old houses, wondering: perhaps he was born behind this door, perhaps he scribbled down his first lines on these stairs, perhaps he first fell in love by this fountain… Yet there was no sign of the great poet in this tiny, remote village. He might as well never have existed.

As we returned to our van, I typed in my phone: “I believe that Medzarents’ memory and legacy will, one day, return to Pingean and his bust will adorn the little village center where older men are gathered now chatting, and perhaps, just perhaps, a small library in the village will carry his name. No, I do not believe. I know.”

In a poem titled “The language in which I wrote,” (Լեզուն որով գրեցի), poet Vahan Tekeyan (1878-1945) laments the fact that the Western Armenian language has fewer and fewer speakers, and perhaps within a century, the poems he poured his heart into “will lie in a corner” with no one being able to read them.

There has been renewed attention to the challenges facing the Western Armenian language, be it through conferences and workshops on the topic, or through concrete initiatives to make the language easily accessible to the “iGeneration,” born with iPhone in hand and an attention span of 140 characters.

Major organizations such as Hamazkayin, the Gulbenkian Foundation, and the Armenian General Benevolent Union (AGBU) have demonstrated renewed interest in tackling this issue in recent years, but a broad base and spectrum of initiatives by artists, writers, IT, and social media experts are needed—and I borrow Steve Jobs’ famous quote here—to put a dent in the declining universe of Western Armenian.

The album “Papak” is one such initiative and, I am willing to wager, one that would be dear to Tekeyan’s heart: most of the songs in the album are lyrical poems by renowned Armenian poets put to music—and three Tekeyan poems make the cut! Other lyrical renditions include two poems by Misak Medzarents (including one of my favorites, “Hyughu”), and one poem each penned by Madteos Zarifian, Rupen Sevag, Rupen Vorperian, and Zarouhi Berberian.

“Papak” is the result of an encounter between Parsegh Topjian and Aren Emirsian, where the former proposed that Emirsian create original songs by setting music to Western Armenian poetry. After Ara Dabanjian joined the group, the project picked up speed. The album is dedicated to Topjian, who passed away before the completion of the project. A friend gifted me the CD a few weeks ago, and soon enough, my mental wanderings as I listened to these songs led me here.

It is not just the beautiful rendition that makes “Hyughu” (“The Hut”) a favorite of mine. We had to memorize the poem in middle school, and I continued to grow fonder of it as the years passed, and then as I walked in Pingean.
But before Turkish citizens in Pingean erect the statue of Medzarents, the iGeneration of Armenians need to discover the Armenian poet.

“Papak” takes the poems that “lie in a corner” and releases them into the musical stratosphere, shining yet another beam of light on that cobblestone road to the village center in Pingean.