A Resurgent Monument to the Living Memory of Soseh Mairik 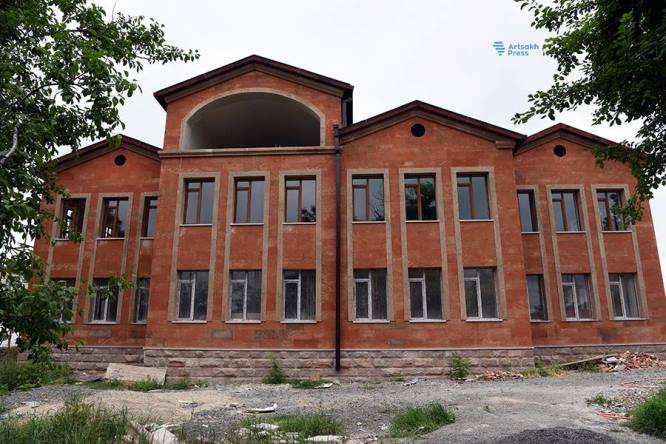 Nearly three fateful decades have gone by since the time, when the authorities of the newly liberated Artsakh Republic—recovering from an epic liberation war fought against a merciless enemy—offered the Armenian Relief Society (ARS) a war-ravaged building, to be refurbished and used as refuge for newly orphaned children and youngsters of destitute families. Less than a year later, the Stepanakert Soseh Kindergarten/nursery was functioning with 85 pupils between the ages of three and six. The totally redesigned and rebuilt multi-story ARS Soseh Kidergarten/Youth Center will be officially declared open on Sept. 6 of this year—as a resurgent monument to the indomitable spirit of our people and a living memorial to the immortal legacy of Soseh Mairik.

Thus, in 1998, in this barely-renovated building, the foundations were being laid of today’s globally known ARS Soseh Kindergartens network, thriving on native liberated soil. And now, after 19 years of dedicated work, on the very same plot of that recycled Stepanakert building, the totally redesigned and rebuilt multi-story ARS Soseh Kidergarten/Youth Center will be officially declared open on Sept. 6 of this year—as a resurgent monument to the indomitable spirit of our people and a living memorial to the immortal legacy of Soseh Mairik.

There is a more than 19-year-long history of relentless, dedicated effort behind today’s shining reality of the Soseh Kindergartens. Presently, the ARS has eight Soseh Kindergartens across the territory of Artsakh Republic, one in each of the following locations: Stepanakert, Shoushi, Togh, Metz Tagher, Ashan, Akanaberd, Qaregah, and Khndzristan—eight radiant establishments, whose tallest, brightest lighthouse will be the very first, newly rebuilt ARS Soseh Kindergarten/Youth Center of Stepanakert, rich with its history-based, storm-tossed location and its ARS linage, extending to the present and reaching out for a bright future.

To complete this brief narrative, let us mention also, that two years ago, right after the ARS 71st International Convention, on Oct. 11, 2015, the ceremony of laying the foundations of the present Soseh Kindergarten/Youth Center building in Stepanakert took place with great pomp and circumstance, in the presence of a large, enthusiastic attendance of local and organizational personalities, ARS members (both local and visiting) and numerous parents and pupils. From Oct.  2015 to the end of March 2016, the construction work—now in its final phase—had continued unabated, only to be interrupted as a consequence of April’s Azerbaijani Armed Forces’ brutal, but utterly failed attempt, of wide-scale invasion.

One can’t help but admire the indomitable faith and the creative and industrious spirit of our people, which has resulted in countless temples of knowledge and literature, song, and prayer, whose hallowed remains, scattered all across our vast, historic patrimony, inspire and remind us, that we are builders—a bastion against destructive forces of all kinds that have come and gone. It is that spirit that moves us to continue our mission to add yet one more center of enlightenment—no matter how modest—to our millennial harvest of wisdom.

On Sept. 6, the first-born and now rebuilt and enhanced ARS Soseh Kindergarten will officially reopen its doors in Stepanakert on historic Armenian soil, beneath the free skies of our Homeland.

On this magnificent occasion, we have heartfelt words of gratitude to all who did their utmost, offering generously their precious time, energy, and all necessary material and spiritual support needed for a most worthy project of love and genuine care for the physical and spiritual welfare of our children—the future builders of our nation’s future. Without that precious support, this magnificent project could not have been realized.

We also offer our sincere wishes of fruitful, successful accomplishments to present and future staffs of the ARS Soseh Kindergarten/Youth Center of Stepanakert to whose devoted care are trusted the spiritual and intellectual growth of the children of invincible Artsakh.

As always, the ARS, with its worldwide entities, true to its sacred mission, shall always be standing by them in the performance of their tasks.