A Rohingya Muslim Lawyer Honoured with Humanitarian Prize in Armenia 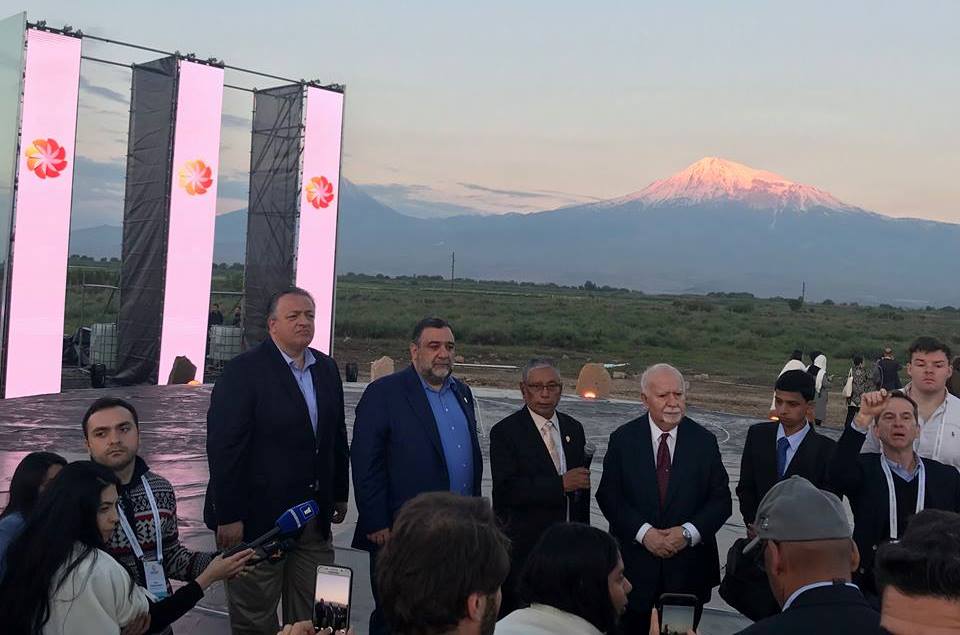 The announcement that Kyaw Hla Aung, a lawyer from Myanmar, won the $1.1 million “Aurora Prize for Awakening Humanity” came as a surprise. Surprise, because he was one of three finalists, the other two being very strong candidates, with strong personalities and incredible stories to tell. Surprise because the 78 year-old lawyer lived all his life in Rakhine state of self-isolated Myanmar, and is not used to communicate and narrate the story of his people in 2-minute sound-bites as we all do in our times. It was also a surprise because Kyaw Hla Aung spent his life defending the rights of the Rohingya, a Muslim people in far away Myanmar, against discriminatory policies of his own government.

But on a second thought the choice makes perfect sense: Aurora Prize was designed during the commemorations of the centennial of the Armenian Genocide. “Kyaw Hla Aung’s work personifies the spirit of the Aurora Prize. He demonstrates the exceptional impact an individual can have in fighting injustice that often seems unbeatable, and inspires us to consider how brave step forward to support the world’s most vulnerable people,” said Mary Robinson – a member of the selection committee and former UN High Commissioner of Human Rights and former President of Ireland.

The personal biography of Mr. Aung overlaps with the history of the Rohingya people. He was a lawyer in his province, even a candidate for the parliament, when discriminatory policies towards the Rohingya started in the late 1970’s. The military authorities in Myanmar decided to consider the Rohingya “Bengalis” which meant that they were considered as migrants from neighbouring Bangladesh. This led to a policy of discrimination against them. The 1982 constitution did not include Rohingya among the 135 “national races” of Burma, and curtailed their civic and political rights. They were purged from public office, and their political rights were progressively restrained. In 1986, the authorities confiscated lands from farmers, and at the time no lawyer was ready to defend their rights. By taking up their cause as a lawyer Kyaw Hla Aung started a career of peaceful defence of his people. For his struggle he was arrested several times, and he spent a total of ten years in prison.

In 2012 extremist groups attacked civilians in Sittwe, the major Rohingya town. “Police was there, they ordered us to seek refuge in the mosque compound, while the terrorists burned the houses” he said. Now he lives with thousand of other Rohingya in a camp for internal refugees. He added: “I lost all my books.”

A Rohingya, Islamist rebel movement only increased the violence. As a result of mass violence against the Rohingya in 2015-2017, at least 650’000 people had to flee their country to Bangladesh, making the total number of Rohingya in Bangladesh surpassing a million. While another 53’000 are now living in camps within their own country. Only 400’000 people remain in their country of origin. The identity and culture of Rohingya itself is threatened today, and only an international outcry and a change of state policies could save them.

The founders of the initiative are three Armenians, Vartan Gregorian who is currently the President of Carnegie Corporation of New York, and entrepreneurs Noubar Afeyan and Ruben Vardanyan, their initiative was based on the memory of those people who did not stay indifferent towards the fate of the Armenian victims, and tried to do something to help. Now, a hundred years later, the Aurora Prize was in its turn the grandchildren of survivors of the first modern genocide reaching out to help other victims of mass violence. What best personifies the spirit of Aurora than a people that suffers the same injustice of massacres, deportations, and uprooting of its culture because of its religious and ethnic identity?

Kyaw Hla Aung has received a $1.1 million prize, but from this amount he can keep only $100’000, while he had to nominate three organizations who will receive the remaining million dollar. He nominated Médecins Sans Frontières UK, Malaysian Medical Relief, and International Catholic Migration Commission, Switzerland, as the three recipients. Aurora Prize is about giving, and Kywa Hla Aung now has the opportunity to give in his turn.

I asked Kyaw Hla Aung how is it possible that the persecution against Rohingya continues when a human rights defender and Noble Peace laureate Aung Sun Sue Kyi heads the state of Myanmar? He answered that she does not have any real power, which still remains in the hands of the military. He said he never met her, but he hopes after the international attention following the Aurora Prize that “she will invite me and I will explain her what we should do”. The Rohingya are not demanding separation or unifying with Bangladesh, “we want to live in Myanmar but under law and order,” he said.