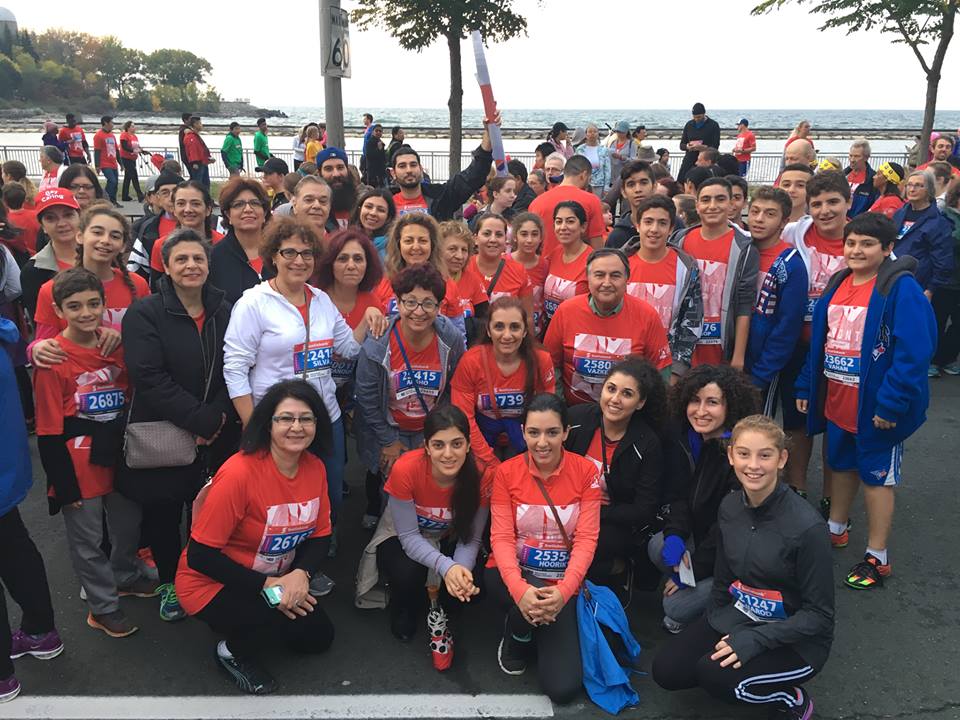 On October 16, 2016, Homenetmen and “A Run To Remember” once again participated in the Scotiabank Toronto Waterfront Marathon.  “A Run To Remember” was one of 185 charities participating in the Scotiabank Toronto Waterfront Marathon.   With 130 participants, the team was once again one of the largest in the Charity Challenge among 185 charities.  The youngest runners were Ari Ajemian and Salvatore Mardikians who were both 8 years old and the most senior runners were Khachig Kansabedian (Age 81) and Bedros Pilavdjian (Age 80).

The Scotiabank Toronto Waterfront Marathon is one of the largest marathons in Canada with a total of 26,000 participants running 5K, Half-Marathon (21K) and Full Marathon (42K).  Runners from 60 different countries participated.  This year’s once again “A Run To Remember” won a huge age class award in the 5K among the 26,000 participants.  John Artinian won 1st place among all runners in the 70-74 age group.  This was a huge victory and achievement for our athletes, Homenetmen and “A Run To Remember” team.

The day started in the early morning hours.  At 5:30am, participants started to arrive at the Armenian Youth Centre. They wore a bib on the back of their T-shirts proudly displaying the names of their loved ones and honourees.  The weather was mild for a change and everyone was looking forward to a very exciting event.  The buses took 5K participants to the start line at Exhibition Place and our Half and Full Marathoners headed to the start line at City Hall. As the race started, the drops of water that was falling from the sky were tears of joy from our honourees that were telling us “Thank you for remembering us.  We are going to be with you every step of the way during the race.”

The race course had thousands of fans cheering on the runners who all crossed the finish line at City Hall and had the opportunity to experience all that an international marathon has to offer.  After the medals, food and pictures everyone came back to ACC to what else more food and an opportunity to discuss their experiences and accomplishments.

Once again new world records were set at the Scotiabank Toronto Waterfront Marathon.  85 year old Ed Whitlock set a new world record by running the marathon in 3:46 and shaving almost 40 minutes off the previous record.  “A Run To Remember” team and athletes also had excellent results.  John Artinian once again received the gold medal for placing 1st in the 70-75 age group in the 5K event.  This was an amazing result which equaled his last year’s performance.  All of our “A Run To Remember” athletes recorded impressive results at this year’s race.

Here are the results for our ARTR-2016 team. Top male Full-Marathoners were once again Raffy Demirdjian and Vahan Mahdessian.  The marathon takes much dedication and months of training to be able to complete the 42K course.

Half Marathon runners produced some incredible results. In the men’s division we had 5 runners at the 2 hour mark or better. Top men’s Half-Marathoner was once again Scott Staffen (1:44).  Scott was followed closely by Serge Markarov (1:50) a first time half-marathoner who ran an amazing race. Close behind were Dan Margorian (1:58), Armen Saatjian (2:00) and Carin Yeghiazarian (2:04).  Our top female half-marathoner was Andrea Paterson (2:15).

The 5K was a much larger field and our top male 5K runner was Jason Rock-Ghazarian (24:10).  Following closely behind Jason was Vahan Ajamian (26:43) and 72 year old John Artinian (28:16).  This was a huge accomplishment for John Artinian who also placed 2nd in his age group (70-74 year olds) among all of the 5K runners and received the silver medal.  Only 6 seconds behind John and placing 4rd for the ARTR team was Levon Fermanian (28:22).  Harout Bedrossian (28.56) was 5th also running a few seconds behind.

The “A Run To Remember” committee this year under the leadership of Hoorik Yeghiazarian was made up of young, energetic and very dedicated volunteers who worked hard for many months to make this year’s event such a huge success.[:]