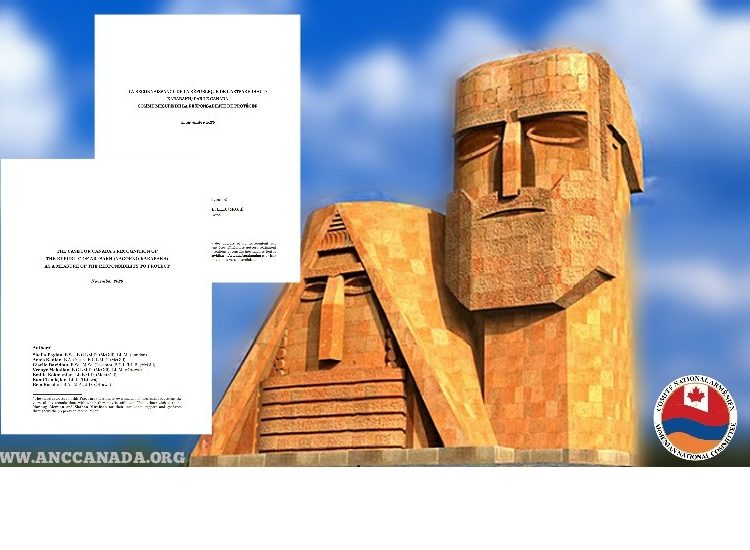 (OTTAWA – December 16, 2020) – Today the Armenian National Committee of Canada (ANCC) distributed a legal brief, titled “The Case for Canada’s recognition of the Republic of Artsakh as a measure of the responsibility to protect”, researched and prepared by a group of Canadian legal experts.

“The 48-page bilingual brief presents all the legal arguments that are relevant to the importance of Canada’s recognition of the Republic of Artsakh, with a specific focus on the doctrine of “Responsibility to Protect.” said ANCC Co-President, Hrag Darakdjian.

“Canada’s moral and legal obligations to prevent further atrocities against the Armenians of Artsakh have been triggered, both generally as a result of the doctrine of the Responsibility to Protect (“R2P”), and also specifically by virtue of its authorization of the sale of drone technology to Turkey which was used to commit atrocity crimes against Armenians.” reads a part of the report’s executive summary.

The summary further mentions, “If the status of Artsakh is not resolved it further emboldens Azerbaijan’s admitted quest to take over the remaining region and eliminate Armenians from the area.”

The report has been shared with different levels of government, the Prime Minister’s Office (PMO), Global Affairs Canada (GAC), the House of Commons and the Senate of Canada.

“This is a very important and a professionally researched document that will help us further strengthen our advocacy efforts directed towards the recognition of Artsakh,” said Shahen Mirakian, ANCC Co-President.

The brief is researched and authored by a group of Canadian legal experts, including Sheila Paylan, Anaïs Kadian, Giselle Davidian, Vrouyr Makalian, Emilie Kokmanian, Kami Temisjian and Bela Kosoian. The paper was prepared with advice and guidance from ANCC Co-President, Shahen Mirakian and the chairman of the Armenian Youth Federation of Canada, Manoug Alemian.

The paper is available to download at the following link — https://anccanada.org/legalbrief/