ANCC’s Statement on the 30th Anniversary of the “Karabakh Movement” 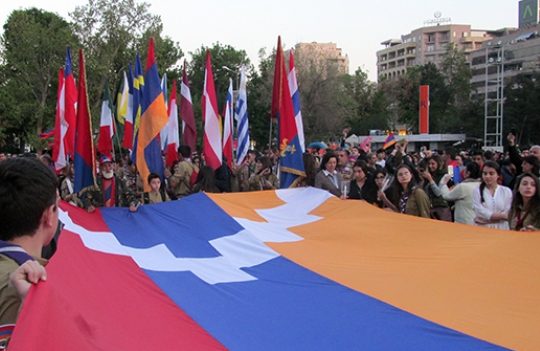 The Struggle Continues for a Free Artsakh…

Ottawa – Today marks the 30th anniversary of the “Karabakh Movement”, the very movement that courageously tore down the Soviet walls of silence to grant the people of Artsakh (formerly known as Nagorno-Karabakh) the freedom and dignity that they continue to struggle for today.

On February 13, 1988, the freedom loving people of Artsakh marched in unison in major demonstrations in the capital city of Stepanakert, demanding for their homeland to be partitioned from the illegal soviet machinated merger to Azerbaijan.

In what was seen as a protest against the Soviet administration of that time, the Armenian population of Artsakh demanded their rights under full compliance with the laws and constitution of the Union of Soviet Socialist Republics (USSR). The Karabakh Movement was the first expression of people’s right to self-determination in the Soviet Union and Eastern Bloc, which led directly to the movements that brought about the fall of the Berlin Wall, the revolutions in Eastern Europe and the freedom of the former Soviet republics.

“What came after the demonstrations was the beginning of the current fate facing the people of Artsakh… their struggle to live in peace and freedom, free of any Azeri aggression and violence” said Shahen Mirakian, president of the Armenian National Committee of Canada (ANCC).

Shortly after their rightful expression of freedom, the Armenians of Artsakh were faced by unrepentant aggression from neighbouring Azerbaijan, which eventually resulted in full-scale war in the early 1990’s, lasting until 1994.

Despite a 1994 ceasefire agreement, Azerbaijan has steadily continued to carry out attacks against Artsakh. The most recent large-scale ceasefire violation, which occurred in April 2016, was unprecedented in its scale, duration, and number of civilian casualties. Ever since, and almost on daily basis, innocent soldiers and civilians are killed, due to unsanctioned Azeri aggression.

“Since 1994, the Artsakh side has tirelessly reiterated its commitment to reach a viable and a peaceful resolution to this conflict that respects the right to self-determination of the Armenian population and recognizes the territorial integrity of Artsakh, However, Azerbaijan’s bellicose and unconstructive campaign of aggression continues to threaten a resumption of war and bloodshed” said Mirakian.

“Despite all the hardships faced today, Artsakh stands as a beacon of democracy, hope and freedom that throughout the years has strongly demonstrated its commitment to peace and its ability in becoming a sovereign nation, worthy of international recognition” concluded Mirakia

The ANCC is the largest and the most influential Armenian-Canadian grassroots human rights organization. Working in coordination with a network of offices, chapters, and supporters throughout Canada and affiliated organizations around the world, the ANCC actively advances the concerns of the Armenian-Canadian community on a broad range of issues and works to eliminate abuses of human rights throughout Canada and the world.