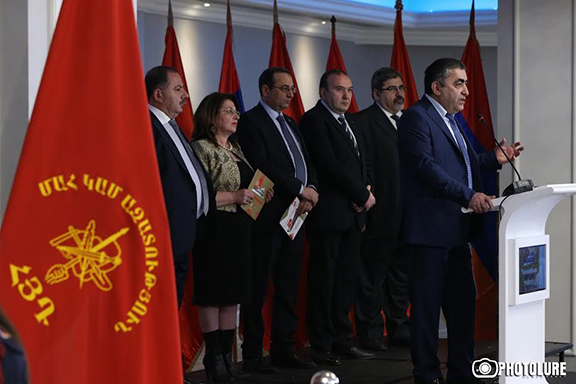 ‘A New Beginning, a Just Armenia’: ‘Unlike Many Others, [the ARF is] a Party with an Ideology, a Program, a System of Values, and Experience,’ Says Aghvan Vardanyan

The platform was presented by high-ranking party officials and candidates in the upcoming election. ARF Parliamentary Faction secretary and head campaign manager Aghvan Vardanyan welcomed guests and announced the start of the ARF’s campaign.

“The ARF kicks-off its election campaign with the presentation of its platform, because we, unlike many others, are a party with an ideology, a program, a system of values, and experience,” Vardanyan said in his opening remarks.

“I would like to ask you all a few simple questions,” said Vardanyan. “Other than the ARF, there are four political parties and four political blocs taking part in these elections. Look closely—aren’t those four political parties actually alliances in their compositions, diversities, and internal inconsistencies? Is the ARF perhaps the only real political party taking part? Look closely—which of the other participating forces is not centered around an individual or leader? Which participating party is not only present in Armenia, but in Artsakh (Nagorno-Karabagh) and in over 30 countries around the world, having a real impact on the protection of Armenian interests everywhere? Which force has always remained consistent and has not deviated from its principles? Which force is not populist and embodies the Armenian soldier, laborer, and intellectual? Which force is guaranteed not to dissolve and split into different factions once elected to the National Assembly? We are asking you to all to ask yourselves these questions. The choice is obvious. The ARF is your party. The ARF’s ideology will become victorious. Armenia will become victorious.”

During the event, the ARF’s official campaign website votearf2017.am was also launched.

Following Vardanyan’s remarks, ARF Parliamentary Faction leader and head of the party’s election ticket Armen Rustamyan spoke about the importance of the upcoming elections for the Armenian people, considering they are the first Parliamentary elections after the adoption of the new constitution that make way for a new system of government for the country.

“We have consistently worked hard to give our people the opportunity to elect in this new [governing] system with a new electoral system—what, in reality, is a founding Parliament.” said Rustamyan. “This Parliament will become a founding Parliament in our state’s 25-26 years of independence, because it will be the driving force behind implementing all those reforms—the prerequisite for which we have created through the [new] constitution and [the pursuant] legislation.”

According to Rustamyan, the ARF decided to take part in the election in order to show the people the work the party has done and to ask the people to allow it to continue what it has started. “Over the years, the ARF has begun a serious process and has a mission to continue this process.  We have a responsibility to cement what we have started and to make all the reforms a reality,” said Rustamyan.

The overall discontent in the country cannot reversed without the eradication of the political system that has given birth to monopolies and allowed for the country to be governed by one individual or power, according to Rustamyan. In his address, he noted that with the adoption of Armenia’s new constitution, the idea of a President having absolute authority will no longer exist.

“[The ARF’s] slogan—‘a free, independent and united Armenia’—is based on three important pillars: the individual, the family, and the people… Our central hope is each Armenian individual, who has the right to live freely in his or her homeland,” noted Armenia’s current Minister of Education and Science and ARF candidate Levon Mkrtchyan. During his address, he explained that Armenia has a historic chance to establish a Parliament, which can play a major role and guarantee a balance of power within the country.

Armenia’s Minister of Territorial Administration and Development and ARF candidate Davit Lokyan said that it is vital for the Armenian Diaspora to take part in Armenia’s economic development. According to Lokyan, the Diaspora cannot be a source for donations. “The Diaspora seeks to directly participate in Armenia’s economy. Therefore, Armenia must do everything possible to utilize the Diaspora’s potential,” Lokyan noted.

Candidate Artsvik Minsayan, Armenia’s current Minister of Nature Protection, noted that in order to eradicate corruption from within the government, the public service sector must be based on the principles of patriotism, responsibility, and professionalism. Minasyan went on to say that the ARF will ensure that the country’s natural resources are protected and used only for the betterment of the Armenian people.

Armenuhi Kyureghyan, fourth on the ARF’s proportional candidate list, said that a just Armenia is one in which social justice exists in all spheres of public life. “We [the ARF] are comprised of youth, we have female representation, and create equal opportunity for all. Look at our program, look at our team, and you will see that the ARF is ready to execute its plan,” said Kyureghyan.

In his address, ARF Bureau member and director of its Central Hai Tahd office, Giro Manoyan touched upon the Artsakh issue. “For us, a free and independent Artsakh is a strategic milestone, which will lead [the Armenian people] to a united Armenia. It is necessary to enhance the strategic partnership between Armenia and Artsakh. We believe that it is important to strengthen our military, and certain programs in this regard are already being implemented,” Manoyan noted.

Speaking about the party’s foreign policy, Manoyan said that the ARF is not pro-Russian, nor is it pro-American or pro-European. “The ARF is pro-Armenian and Armenia-centered,” Manoyan noted. “As a party with a pan-Armenian purpose and structure, [the ARF] also assumes the responsibility of resolving the issues of the Armenian Diaspora, specifically the issue of safety of our diasporan communities. It is vital for the Diaspora to be involved in life in Armenia,” he added.

Manoyan also noted the importance of developing stronger relations with neighboring Georgia. According to him, the ARF believes that better relations with Georgia will ensure that the rights of Armenians living in Javakhk are protected.

“Each vote counts in these elections,” Manoyan said, urging the public not only to vote for the ARF, but to also call on their fellow citizens not to remain indifferent and to take part in the election process.