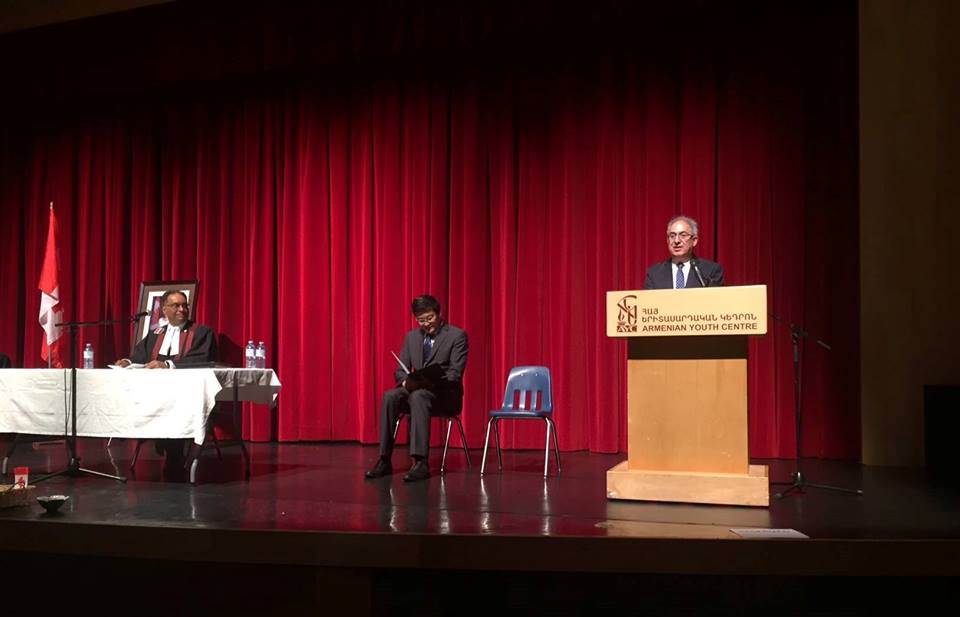 On August 29th the Armenian Community Centre of Toronto hosted a Citizenship Ceremony.

Lawyer and community member Rob Adourian was the MC who paid tribute to the memory of the Georgetown Boys, among the first Armenians to reach Canada in the 1920s, and the late Professor Safarian.

After the ceremony, Apkar Mirakian, chairperson for the ACC-Sponsorship Agreement Holder, congratulated the new citizens on behalf of the Armenian Community Center. He said, ”Over the past 3 years the Armenian Community Center has worked tirelessly to bring over 3000 privately sponsored Syrian newcomers to Canada,” adding: “It’s a hard transition and it requires perseverance and determination.  Today you have reached the first of many milestones.”

Mirakian also thanked Dr. Geng Tan for helping arrange the Citizenship ceremony and to his family who hosted a reception in the main hall of the Centre.

Below is the speech read by Rob Adourian during the Citizenship ceremony:

I’m Robert Adourian and on behalf of the Armenian Community Center I would like to congratulate you on making one of the best decisions of your lives – making Canada your next home. You are about to start one of the greatest chapters of your life, it won’t come without challenges, but it will come with great pride and honour – because Canadian Citizenship is truly special.  As you get to experience the different Canadian provinces and cities, you will come to understand the different cultures that make up the Canadian identity. And bringing different cultures, ideas, and backgrounds together allows us to develop new friendships, forge new beginnings, and develop a deeper understanding of each other and ourselves.

My story is one of great gratitude to Canada for all that my country has given me. Ninety-five years ago this past July, my father was brought to Canada with a group of orphaned boys. The Georgetown Boys or Canada’s Noble Experiment was the first Canadian humanitarian act on an international scale. The Armenian Canadian Relief Fund spearheaded this effort. At this time, Canada started to take in orphaned Armenian children from Turkey. The first 50 came in 1923. The following year another 40 boys arrived. My father was one of these boys – he was 7 years old when he came to Canada. The boys had been orphaned by the brutal genocide of Armenians in Ottoman Turkey. By 1928, 109 children came to Georgetown, Ontario and eventually came to be known as “The Georgetown Boys”.

The Armenian orphans lived, worked, and were educated on Cedarvale Farm near Georgetown. The boys were largely trained for farming. While the children were safe and out of danger, the transition was difficult – a different language, culture, and traditions. But they were determined to persevere.

By 1927 – 91 of the original boys were placed on farms throughout Ontario. They eventually became Canadian citizens. In 1929 the farm home of the boys was renamed the Cedarvale School for Girls. In addition to boys, 40 girls were taken in by the Canadian government. When asked about his childhood experiences, my father expressed his gratitude to Canada by simply saying “I kiss the ground in this country.”

During the first years of World War II, 25 Georgetown boys volunteered to join the Canadian Armed forces, three of them gave their life for their new country.

After the war they settled in communities throughout southern Ontario. Through one of his friends from the orphanage my father was introduced to Lily Safarian, a young woman from the small Armenian community in Toronto. They married started a family. My childhood memories include times spent with my grandparents, Israel and Yerchanig Safarian, Armenian community picnics, attending language school on Saturday mornings and seeing my parents and grandparents assist new immigrants. This included helping them finding housing, jobs for that coveted “Canadian experience”, enrolling the family in OHIP and registering their children in school.

In 2011, the Ontario Heritage Trust, an agency of the government of Ontario, also commemorated the history of the Georgetown boys by designating Cedarvale Park as an Associative Cultural Landscape.

Many of the Georgetown boys and girls grew up to become involved in humanitarian and charitable work as a way of giving back to the country that took them during a dark time.

My mother’s brother – is another notable story, Professor Edward Safarian. Albert Edward Safarian was born in Hamilton, Ont., in 1924. His parents were among the first Armenians to immigrate to Canada and he maintained a close connection to this heritage throughout his life. The Great Depression was hard on the family and left Uncle Ed thinking about how this could have been prevented. Regardless of hardships, the Sarfarian family home was a gateway to many newcomer Armenians.

Following an undergraduate degree at University of Toronto, he took up PhD studies at the University of California, Berkeley, where his thesis was on Canada in the Great Depression. Here he also met Joan Shivvers, who became his wife of 64 years.

Returning to Canada, Prof. Safarian taught at the University of Saskatchewan and then the University of Toronto, where he served as dean of the School of Graduate Studies from 1971 to 1976. His sterling academic reputation led to a host of honours, including his appointment as president of the Canadian Economics Association and Fellow of the Royal Society of Canada. He was also named a member of the Order of Canada.   Following his retirement from the University of Toronto in 1989, he continued his research at the university’s Joseph L. Rotman School of Management, and taught in the executive MBA program. Service to his community and to Armenia was always a significant part of his life. During his time at the University he made connections with academics in Armenia, and arranged for students to continue their studies in international economics and business at both York University and the University of Toronto.

Today I stand before you as a child of both these remarkable stories. These influences shaped my life and the lives of members of Armenian Community in Toronto. I grew up here, went to school here, met my wife here and together we raised our family here – as each of you will.  Just as the story of the Georgetown boys and Professor Safarian, you too will experience challenges, but you too must be determined to persevere, and you too can experience greatness.

Today we are very pleased to be able to say ‘Welcome’ to You, to thank you for the contribution that you will make as you settle and build your new life here.  But I firmly believe that to truly be Canadian, you will need much more than citizenship, Tim Horton’s, a love for hockey and the cold Canadian winters – you need to take advantage of the opportunies to become involved. You will benefit immensely by becoming involved in the life of the community around you and by learning about that community and what makes it function. This will not only make your own newly-acquired citizenship more meaningful for you, but will enable you to have a part in making Canada a better place for your family and future generations of immigrants.

The Armenian Embassy in Ottawa Houses A Treasure: “The Last Shepherd of Kessab”