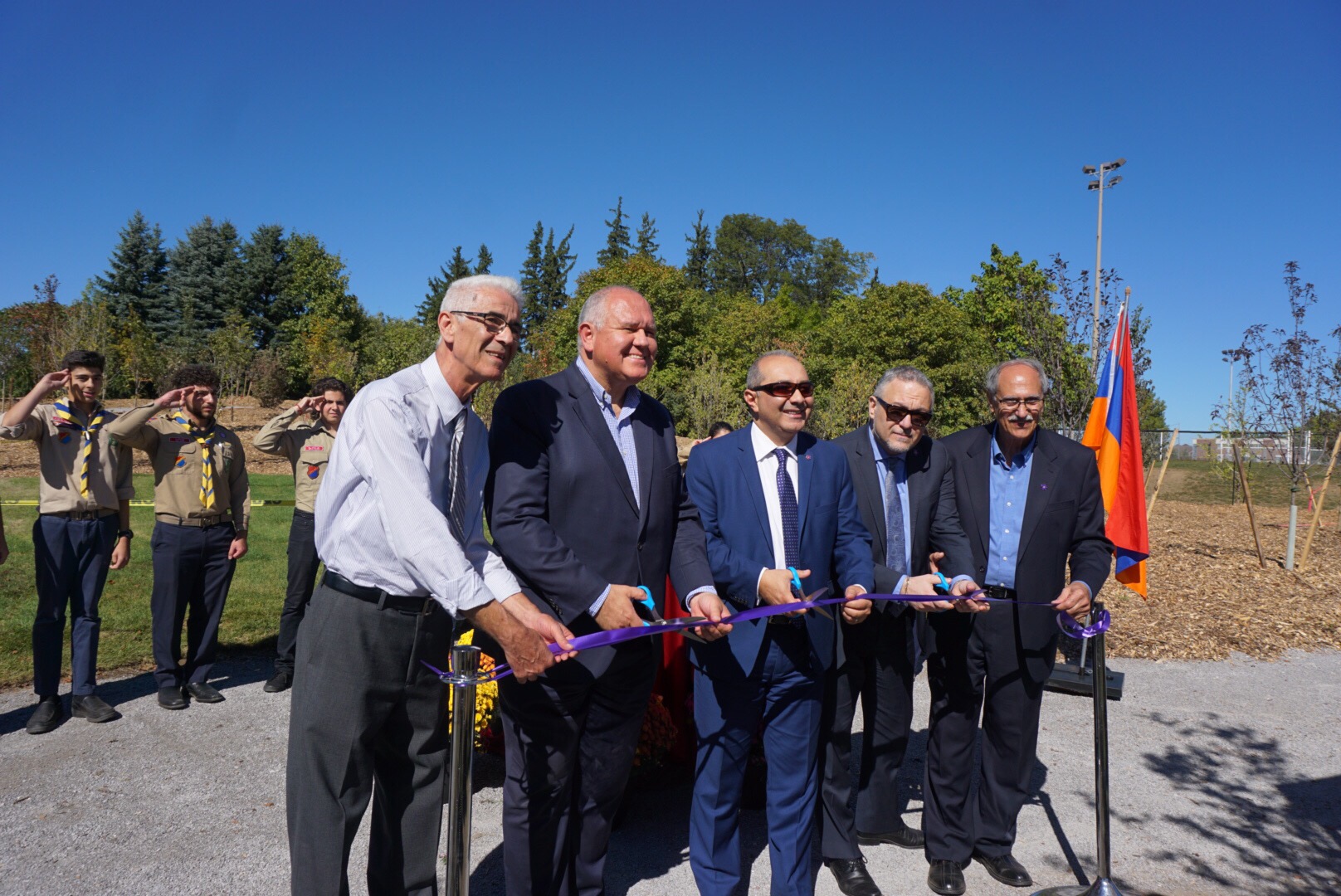 A small patch of land, evergreen trees, a memory: the searing pain travelling a century implanted in a park in a suburb in Toronto as a testament of survival and perseverance. The unveiling of the Armenian Genocide Forest of Hope took place on September 24th, in the City of Markham. Markham Mayor, Frank Scarpitti, was joined by the Ambassador of Armenia to Canada Armen Yeganian, as well as the Chairs of the Armenian Genocide Centennial Committees of Canada and Ontario, Mher Karakashian and Krikor Chitlian, in the official ribbon cutting ceremony.

Among the more than 600 attendees from across the Greater Toronto Area, were representatives from all levels of government. Representing the Prime Minister of Canada, Justin Trudeau, was Member of Parliament and Chair of the Canada-Armenia Parliamentary Friendship Group, Arnold Chan. Representing the Premier of Ontario, Kathleen Wynne, were Helena Jaczek, Minister of Community and Social Services and Michael Chan, Minister of International Trade.

Dr. Jaczek presented the Premier’s message on this memorable occasion. It read: “I am delighted to extend warm greetings to everyone attending the official opening of the Armenian Genocide Memorial, Forest of Hope. This memorial has been envisioned as a place of beauty, contemplation and community. It is a gathering space where people from all faiths and cultures can remember and reflect on the lessons of history. Through remembrance and reflection, we strengthen our resolve to combat hate and intolerance — and renew our commitment to building a diverse, inclusive and compassionate society.”

Markham Deputy Mayor Jack Heath, York Regional Councillor Joe Li and Markham City Councillors Alan Ho, Logan Kanapathi and Amanda Colluci all joined Mayor Frank Scarpitti.  “Despite being displaced, the Armenian community is determined,” said Scarpitti. “The next generation of Armenians will be just as proud as the first Armenians who came to Canada. That’s a wonderful thing.” Markham Mayor, Frank Scarpitti, giving his speech in front of the Forest of Hope commemorative plaque.

The Forest of Hope Project was launched by the City of Markham on December 19th, 2015, on the occasion of the centennial of the Armenian Genocide, which was commemorated throughout 2015. “We know the
meaning of genocide, its history and the importance of education,” said Armenian ambassador Armen Yeganian. “We have to continue to educate, not just today, tomorrow or the first 100 years. But always, because unfortunately it still continues to happen.”

The project involved planting a small forest in the confines of the Ashton Meadows Park, in memory of the 1.5 million victims of this first Genocide of the 20th century. The forest will serve as a permanent reminder of this dark period of human history and will remind us of our collective responsibility to ensure such crimes are never repeated again. The specially designed forest by renowned landscape architect Haig Seferian will feature 100 trees of varying species, to celebrate the survival and rebirth of humanity from the ashes of Genocide.

Marianne Davitjan, who presented the Armenian National Committee of Canada’s message, outlined the importance of memorials such as the Forest of Hope. “The places in present day Turkey and Syria, where the Armenian Genocide took place, had the potential to serve as sites of memory and education, much like how the concentration camps in Europe served for the Holocaust,” she explained. “Due to denial and continued violence however, those sites have been destroyed and forgotten. Hence why it is important for Armenians around the world to build genocide memorials in their home cities, in order to promote collective commemoration and education.”