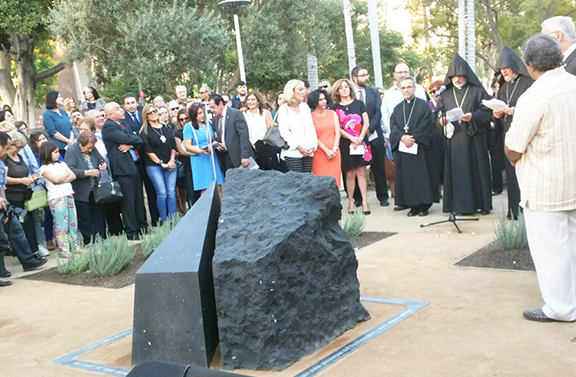 An Armenian Genocide monument was unveiled Saturday at Grand Park during an event, which brought out hundreds of community members and Los Angeles County Supervisor Mike Antonovich, who has been instrumental in the fruition of the project.

Conceived by architect and designer Vahagn Thomasian in collaboration with artist, Levon Parian and photographer, Ara Oshagan, the Armenian Genocide Monument was a continuation of an effort by the three who mounted the much-talked-about iWitness project last year at Grand Park to commemorate the centennial of the Armenian Genocide. Moved by the positive response, the LA County teamed up with the iWitness project on the unveiling of this monument, which sits at Olive Court in the park.

The unveiling, which was led by Antonovich and Armenian religious leaders, followed a program that featured presentations by the three collaborators, as well as a keynote delivered by the director of the USC Armenian Institute, Salpi Ghazarian. Once at the foot of the statute, Garine Avakian performed a moving tribute to the Armenian nation, which was followed by prayers from the clergy, who joined Antonovich and the collaborators in unveiling the monument and releasing white doves as a symbol of peace.

The permanent monument is made of black volcanic tuff rock imported directly from the Ararat Valley of Armenia. Tuff is indigenous to the Armenian highlands and deep-rooted in that millennial history. It has been the material of choice for centuries and used to build hundreds of churches, historical buildings and artworks. The monument is a silent witness to that history as well as a witness to the Genocide itself. The five-ton peace of rock was sculpted by Thomasian, who explained that the split in the center of the rock represented the split that the Genocide created in the lives of Armenians, while the rough-edged portion memorializes the victims’ attempt at survival. The smooth portion of the monument is itself an ode to survival and to future generations of not just Armenians but human kind in general.

The monument also features a quote from famous Armenian-American author William Saroyan, who wrote, “In the time of your life, live — so that in that wondrous time you shall not add to the misery and sorrow of the world, but shall smile to the infinite delight and mystery of it.”

“The idea that a rock can be a witness is perhaps unusual but very significant,” said Oshagan. “It was there, and history is imbedded in it. A witness need not speak to be a witness. Just like the trees around Auschwitz are witnesses to the Holocaust.”

The juxtaposition of smooth and rough surfaces on either half of the iWitness monument further symbolizes the past and the present and re-emphasizes the disruption between the two realities.

“The monument is sculpted at 4, 24, 19, 15 degrees symbolizing the date of April 24, 1915,” said architect and designer Thomasian. “The monument has meaning at every level of its conceptualization and construction.”

The unveiling ceremony concluded with an outdoor concert featuring performances by the band Green Card, as well as a separate performance by members of the Element Band, Ara Dabandjian and Sosse Aramouni.

"The Promise" a Hit at the Toronto International Film Festival