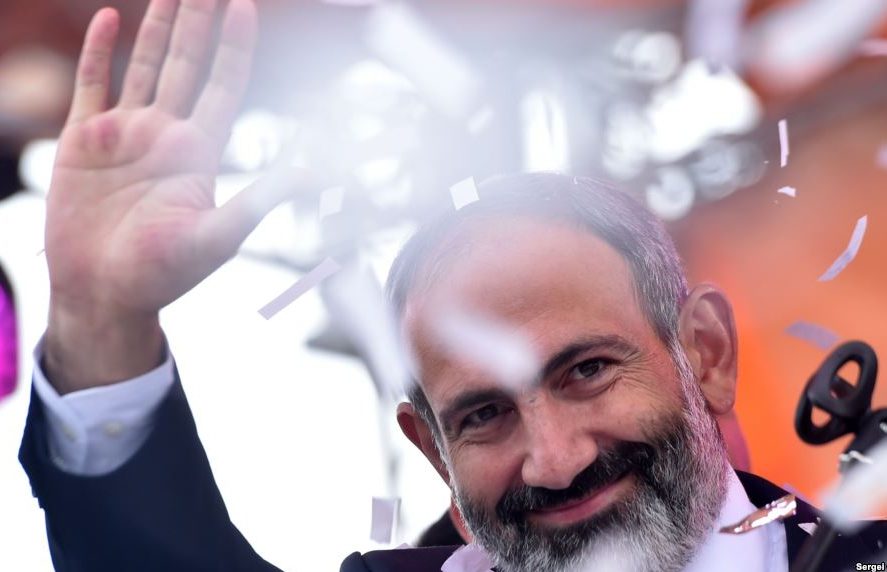 YEREVAN, (Azatutyun)- Armenia’s parliament has elected protest leader Nikol Pashinian as the country’s next prime minister in a 59 to 42 vote.

The vote on May 8 came after the parliamentary faction leader of the ruling Republican Party of Armenia (HHK), Vahram Baghdasarian, announced that the HHK would provide Pashinian with 11 votes – enough to give him, together with opposition lawmakers, the minimal amount of support needed to be elected.

Pashinian was expected to meet later on May 8 with President Armen Sarkisian, who is tasked with formally signing into power his appointment.

Pashinian then has five days to propose the members of his cabinet and another 15 to submit his government program to parliament for approval.

He has said that he would form a government of “national accord.”

However, HHK lawmaker Gevorg Kostanian, noted after the May 8 vote that Armenia now has a “minority government,” and that the HHK continues to wield a parliamentary majority.

That means Pashinian will have to work together with the HHK majority or face difficulties getting legislation passed, like the changes to the electoral law that he has proposed.

The HHK also remains in a position where it could block Pashinian’s proposed cabinet and his government program.

Baghdasarian stressed on May 8 that the 11 HHK votes for Pashianian’s candidacy were not “defectors” and should not be treated by Pashinian as defectors.

Under Armenia’s constitution, if the parliament does not approve Pashinian’s government program within 20 days of taking office, the legislature would automatically be dissolved and early general elections would be called.

Russian President Vladimir Putin sent a congratulatory message to Pashinian after the May 8 vote, according to the Kremlin press service.

Putin was quoted as telling Pashinian that he hopes his work as prime minister will “promote stronger, friendly, and allied relations between our countries and partnership within the framework of the Commonwealth of Independent States, the Eurasian Economic Union, and the Collective Security Treaty Organization.”Ahead of the vote, describing aspects of his government program, Pashinian told lawmakers on May 8 that Armenia would continue to be a member of the Russia-led Eurasian Economic Union (EEU) and continue its military cooperation with Russia, which has a military base in the Caucasus country.

“Allied relations with Russia should be based on friendship, equality, and mutual willingness to solve problems,” Pashinian told the parliament.

“We see military cooperation with Russia as the main factor guaranteeing Armenia’s security, ” he said.

On the issue of Armenia’s long-standing dispute with Baku over Azerbaijan’s breakaway region of Nagorno-Karabakh, Pashinian said he was ready to negotiate a peaceful settlement “on the basis of the equality of peoples and self-determination.”

“We have to give the international recognition” of the breakaway region’s independence “a fresh boost, and the [Armenian] community has a big role in this,” he said.

But Pashinian said any talks with on the dispute with Azerbaijan’s leadership “cannot be effective or comprehensive without the participation” of ethnic Armenians who control the breakaway territory.

While Pashinian and other lawmakers spoke in parliament on May 8, Yerevan’s central Republic Square was thronged with thousands of people who responded to Pashinian’s call for them to gather there and ensure the HHK would follow through on its promise to elect him. Celebrating after the vote what Pashinian described as “an epochal victory,” many of Pashinian’s supporters at Republic Square were wearing some kind of white clothing — either T-shirts, hats, or dressed completely in white — in response to his call for them to wear white.

Tens of thousands of people also had joined a mass rally in Yerevan late on May 7 to show their support for Pashinian, the leader of a small opposition party who fell eight votes short of being elected in parliament’s first vote on May 1 but received assurances from HHK leaders after a May 2 general strike that he would receive their support.

Pashinian had been joined at the rally by Armenian-American rock star and activist Serj Tankian, who is the lead singer of the alternative metal band System Of A Down.

Tankian credited the crowds that have taken to the streets repeatedly to support Pashinian since mid-April for achieving a major, peaceful change of government in the small Caucasus country.

“You managed to turn your anger and despair into a positive movement,” Tankian told the crowd.