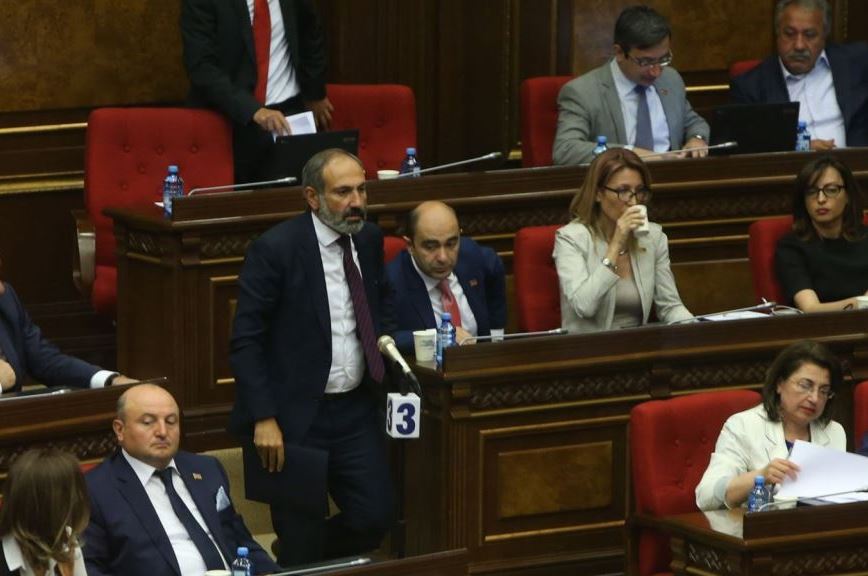 Opposition leader Nikol Pashinian is about to address the National Assembly in Yerevan, 1 May 2018.

The 105-member National Assembly will meet again one week after its HHK-controlled majority blocked Pashinian’s bid to replace Sarkisian as the country’s leader. The move provoked a fresh wave of anti-government protests which brought the country to a standstill. The HHK promptly promised on May 2 that it will help the protest leader get elected on May 8.

The HHK spokesman, Eduard Sharmazanov, reaffirmed that pledge after a joint meeting of the party’s governing board and parliamentary faction which was chaired by Sarkisian.

“If I’m not mistaken 45 signatures [of parliamentarians] in support of Pashinian have been collected, and the Republican Party will ensure, with a sufficient number of votes, that we have a prime minister,” he told reporters. “This has been decided by the faction. We have urged our deputies to vote for [Pashinian.]”

Sharmazanov declined to say how many members of the HHK’s 57-strong faction will support Pashinian’s candidacy. “You’ll find out tomorrow,” he said.

Pashinian, whose massive protests forced Sarkisian to resign as prime minister on April 23, is expected to be backed on Tuesday by wealthy businessmen who were elected to the parliament on the HHK ticket. “I will vote for Nikol Pashinian tomorrow,” one of those tycoons, Samvel Aleksanian, reiterated on Monday.

Pashinian, 42, appeared confident about his coming to power when he appealed to supporters on Facebook earlier in the day.

“As a result of political consultations, I can say that there are now no indications that the prime minister may not be elected tomorrow,” Pashinian said in a video address. “I think that everything will go according to plan. Namely, the National Assembly will appoint the candidate chosen by the people as prime minister.”

Pashinian again told supporters to gather in Yerevan’s Republic Square and watch the parliament debate from big screens that will be placed there. He said he will address them right after the vote.

Pashinian has been nominated for the top executive post by the parliamentary factions of his Yelk alliance, businessman Gagik Tsarukian’s bloc and the Armenian Revolutionary Federation.