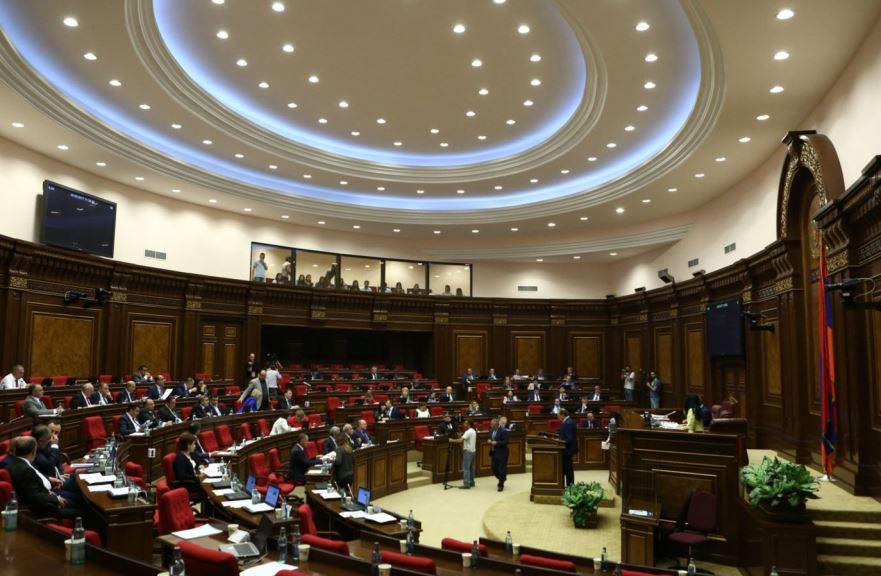 (Azatutyun)- Following a heated debate, the Armenian parliament passed on Friday a government bill which is meant to combat domestic violence in the country.

The government pushed the bill through the National Assembly despite continuing resistance from some deputies representing the ruling Republican Party of Armenia (HHK). But it won over other, more senior HHK figures who openly criticized the initial version of the legislation circulated in September.

The latter joined conservative fringe groups in claiming that some of the proposed legal provisions would undermine traditional “Armenian family values.” The Armenian Justice Ministry responded by amending the bill drafted by it. In particular, the ministry expanded the title of the bill to emphasize that it is aimed at not only preventing domestic violence and protecting its victims but also “restoring solidarity within families.”

Women’s groups have criticized this phrase, saying that “solidarity” is not a legal term and could be open to different interpretations by relevant authorities.

The final version of the bill retained other significant provisions. The Armenian police will now be required to stop violence within families threatening the lives or health of their members. What is more, the police could force a violent husband to leave his victim’s home and stay away from it for up to 20 days. Armenian courts will be allowed to extend such bans to between 6 and 18 months.

The law stipulates that domestic violence can be not only physical but also sexual, psychological and even economic. It makes clear that a “substantiated presumption” of such instances of violence will be sufficient grounds for police intervention. Deputy Justice Minister Vigen Kocharian stressed that this would be done by a special police unit trained to deal with such cases.

Hayk Babukhanian, a controversial lawmaker from the ruling HHK, attacked this provision during Thursday’s parliament debate on the bill. “Can you imagine what it could lead to?” he said, warning of police mistakes.

Gevorg Petrosian of the Tsarukian Bloc, the second largest parliamentary force, echoed this concern. Petrosian claimed that the law would revive what he called a Soviet-era practice of police prosecuting men at the best of their “malicious, freedom-loving wives.” “I regard it as a law on destroying peace and harmony in families,” he said.

Babukhanian, who publishes a newspaper known for its anti-Western commentaries, also denounced another clause that provides for non-governmental organizations’ involvement in the protection of domestic violence victims.

Samvel Farmanian, a more mainstream HHK parliamentarian, also spoke out against the bill. “Unfortunately, this law will not help to reduce cases of violence in families. It may actually have opposite effects,” he claimed.

Nevertheless, the HHK-controlled National Assembly backed the landmark law by 73 votes to 12, with 6 abstentions. All of those 12 deputies represent the Tsarukian Bloc, which claims to be in opposition to the government.

None of the HHK deputies voted against the bill. Babukhanian and several other Republicans chose to boycott the vote instead.

Gagik Melikian, the number two figure in the ruling party’s parliamentary faction, defended the legislation, saying that it poses no threat to “traditional families.”

Deputies from the opposition Yelk bloc also voted for the measure. One of them, Mane Tandilian insisted later on Thursday that domestic violence is a more serious problem in Armenia than it may seem.

“People don’t talk about it because it happens in their families,” Tandilian told RFE/RL’s Armenian service (Azatutyun.am). “And for us, the family is taboo, a sacred environment about which we don’t like saying negative things in public.”

The female lawmaker also said that the new powers given to the police will discourage violent conduct.

A senior representative of the Armenian police advocated the passage of the bill when she spoke at parliamentary hearings in October. The police recorded 3,571 cases of domestic violence from 2012-2016.

According to the Yerevan-based Women’s Resource Center, more than 50 Armenian women have been beaten to death and murdered otherwise by their husbands or other relatives in the last five years.