Armenian Youth in Canada Raise Their Voice for Artsakh 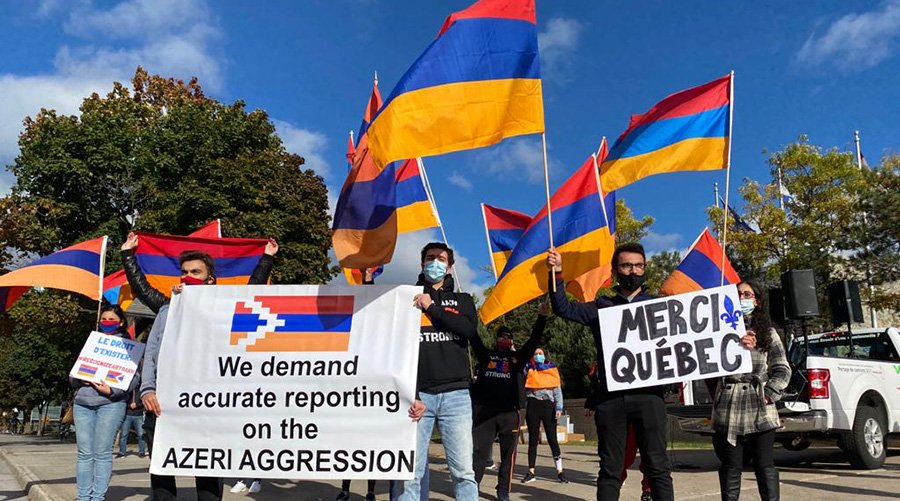 “Horizon” – On October 8, Armen Karo Student Association, along with Armenian Student Associations of Concordia University and Université de Montréal, and the Armenian Youth Federation of Canada, joined their voice to the international movement of #RecognizeArtsakh endorsed by the Foreign Ministry of the Republic of Artsakh.

The Associations raised their voice in front of the CBC/Radio-Canada broadcast center. They condemned Turkish-Azerbaijani invasion on the democratic and independent Republic of Artsakh. They also condemned the Turkish Ambassador to Canada who publicly insulted the CBC anchor, live on-air.

The Armenian Associations condemned the shelling on international journalists and underlined that terrorist states like Turkey and Azerbaijan are threatening free speech and democracy around the world.

The speakers from the Associations also noted the complete absence of Canadian journalists on the ground in Artsakh and Armeni and reminded them that the democratic Republic of Artsakh has opened its doors to over 200 foreign journalists from around the globe:

“The Canadian press and the Canadian news agencies need to press the government to act upon the facts and real human stories provided by our journalists. We need answers from our government. We need condemnations from our Canadian government. Condemn Turkey and condemn Azerbaijan now!.”