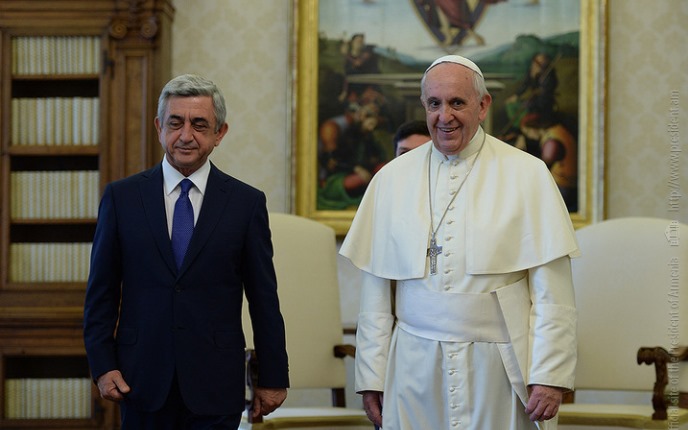 (La Stampa)- A 2-meter-high bronze statue of Saint Gregory of Narek, a 10th century Armenian monk, declared by Pope Francis as 36th Doctor of the Church, will be inaugurated next Thursday, April 5, at 12, in the Vatican Gardens in the presence of the Pope.

President of Armenia, Serzh Sargsyan will arrive at the Vatican to participate in the ceremony. He will be received in the morning in private audience by the Pope in the Apostolic Palace. The Pope will then meet with His Holiness Karekin II, Catholicos of all Armenians, and  Aram I, Catholicos of the Great House of Cilicia.

President Serzh Sargsyan proposed placing the statue of St. Gregory in the heart of the Vatican  during the journey of Pope Francis “to the first Christian nation” on 24-26 June 2016.

The President then gave Pope Francis a statue of the Saint to thank him for the proclamation of Gregory of Narek as Doctor of the Church.

The bronze sculpture was transferred to the Vatican Gardens on 21 March, as announced by the Armenian ambassador to the Holy See, Mikayel Minasyan.