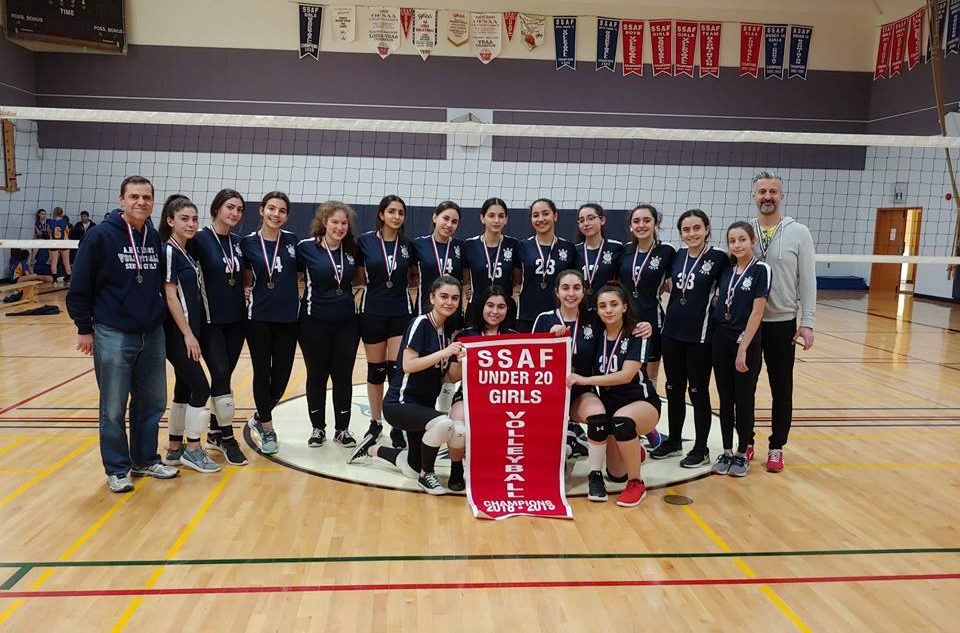 The ARS school participates in the SSAF (Small Schools Athletic Federation) league.  The volleyball program at ARS is relatively new.  Six years ago athletic director Alex Movel set out to develop an athletic program that would add athletic achievement to academic excellence.  He recruited volunteer coaches Sam Manougian and Jack Hagop Kakousian and started a training program for the girls’ volleyball team at the elementary and high school levels.  For the first few years the teams struggled as they faced more experienced teams.  However the players never gave up and continued to work hard and started to develop their skills and teamwork.  Every year their results slowly improved and finally after 2 short years they won their first championship in 2016.  Last year the team won their 2nd championship banner and this year they would be faced with the task of having to defend their title and trying to win a back-to-back championship.

This year the ARS U20 high school team once again finished their regular league season in 1st place in the south division with a perfect 6-0 win-loss record.  They were headed to the final championship tournament as the number 1 seed.

The top 4 teams in each division came together for an all day tournament.  The tournament draw was made up of 2 pools of 4 teams each.  Each team would play a round-robin match with each of the other 3 teams in their pool.  The ARS team which finished in 1st place in the South Division was in the same pool with Toronto Waldorf School and Peoples Christian Academy who had finished 2nd and 3rd in the North Division as well as UOG which finished 4th in the South Division.  In their pools each team would play 2 straight games and the total number of wins would determine which team advances.  That makes each game and each point very critical and leaves no room for mistakes.

The ARS team defeated UOG (25-12, 25-18), PCA (25-13, 25-11) and Waldorf (25-15, 25-12) and completed their 3 round-robin games in 1st place in their pool with a perfect undefeated 6-0 record.  In the semi-final game ARS faced a very tough team from Town Centre Montessori who had finished in 1st place in the North Division.  The semi-final match would be a game where the winner would have to win 2 out of 3.  This was by far the toughest competition that ARS had faced all day.  The scoring went neck and neck.  ARS kept passing, setting and pounding the ball to the opposition only to have it returned time after time.  Town Centre eventually prevailed to win the first set by a very close score of 25-22.  This was the first set that ARS had lost all day.  Now faced with the possibility of elimination if they lose the 2nd set, coach Jack Hagop Kakousian reminded the players that they needed to calm down, have confidence in their abilities, trust their teammates and to do what they have been doing all season.  As the 2nd set started, the team immediately took control of the play with their serving, passing, setting and repeatedly pounded the ball at the opposition.  ARS completely dominated the 2nd set winning 25-12.  Now the teams were tied 1-1 and had to play a 3rd and deciding game.  In the 3rd game ARS did not waste time and stepped up like true champions winning the deciding game 15-8.

After a long day and many matches it came down to 2 teams and the final match of the day to decide the championship.  In the final championship game ARS was matched against the team from Hudson College.  Hudson College had also advanced to the championship game with an undefeated record during the final tournament.  The championship game was also a 2 out of 3 affair.  ARS started the game with their powerful serves and a continued barrage of powerful hits to the opposition.  However Hudson countered by returning everything that ARS sent their way.  ARS didn’t let up and continued their relentless attack which kept chipping away at Hudson’s defence and won the 1st set with a convincing score of 25-15.  ARS now had Hudson on the ropes and could taste victory.  During the 2nd set it was clear that Hudson was getting tired under the ARS attack and could not avoid the inevitable and ended conceding to ARS 25-12.  Immediately the ARS team erupted with joy and so proud of what they had accomplished.  It had actually happed.  They had won their 3rd championship in 4 years and had repeated as champions.  They all cheered as they raised the championship banner with pride which was a culmination of all their hard work and dedication throughout the season.

Coach Jack Hagop Kakousian said “Our players matured throughout the season and when they set aside their individual needs and focused on the needs of the team, magic started to happen.  It is all about attitude.  I was especially happy to see the team elevate their game to a different level when they were faced with a tougher competition.  They were in the zone.  It was volleyball at its best.  I was so proud of them. ”

Captain Liza Babaoglu provided the leadership the team needed on and off the court.  Her experience was invaluable and she always provided the team with that extra lift when they needed it.  During the championship tournament she said “All the players supported each other.  It was a team victory.  We were focused on our goal but also had lots of fun playing volleyball this year.  Thank you to all our coaches”.

Next year will be a rebuilding year for ARS as 4 of the team’s top veteran players will be graduating this year.  Team captain Liza Babaoglu, Ariane Ghazarian, Paulina Boyadjian and Elizabet Uzel were all part of the 3 ARS championship teams and they have contributed so much to the ARS volleyball team over the years.  They will be missed but we thank them for the excellent role models they have become for the younger players to follow.

Too Much, Too Fast