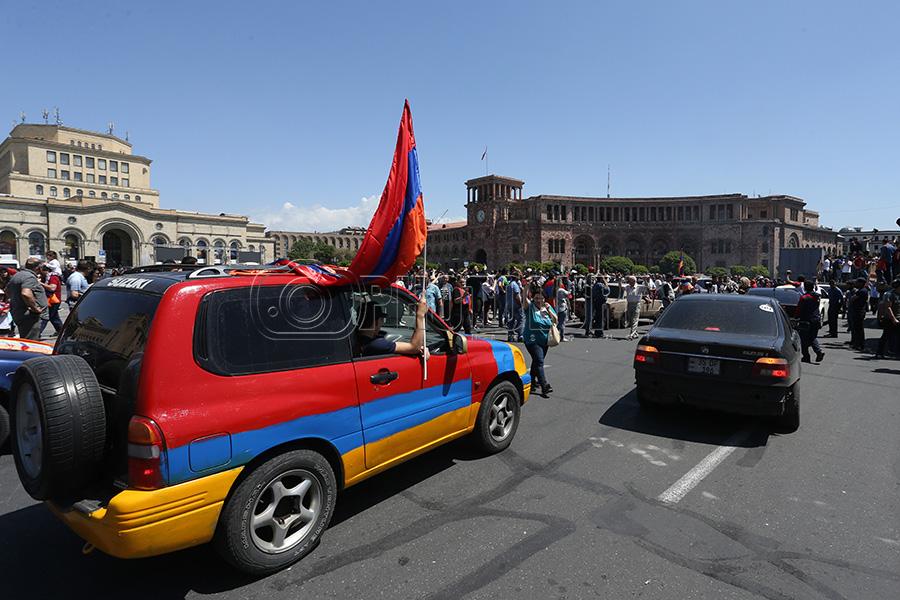 (Azatutyun)-Protesters again blocked many roads in and outside Yerevan on Wednesday, responding opposition leader Nikol Pashinian’s calls for renewed “civil disobedience” actions which followed the Armenian parliament’s vote against his becoming prime minister.

Traffic in much of the Armenian capital ground to halt in the morning as groups of Pashinian supporters took to the streets to demand a handover of power to his opposition movement. Police tried to reopen only a few streets in the city center.

Key highways leading to Yerevan were also blocked by protesters. Hundreds of them gathered on a highway connecting the city to Armenia’s main international airport. Some people stranded there in their cars argued bitterly with the protesters.

Pashinian praised the protesters as he began walking towards the city center from the southern Shengavit district. He said the road blockades and other protests must continue on a daily basis until a “surrender” of the ruling Republican Party of Armenia (HHK). But he also urged supporters to unblock all roads by 5 p.m.

The HHK majority in the parliament on Tuesday thwarted Pashinian’s attempt to succeed Serzh Sarkisian as prime minister. Lawmakers voted against the protest leader’s candidacy by 56 to 45, infuriating many of his supporters.

Pashinian again condemned the parliament vote when he spoke to RFE/RL’s Armenian service (Azatutyun.am) on Wednesday morning. “They want to anger the people,” he said.

“We are analyzing various scenarios. Under all scenarios the people can’t fail to win,” he added.

Under Armenia’s constitution, the National Assembly must again meet and vote on the new prime minister on May 8. The legislature will be dissolved and fresh elections will be called if it again fails to elect a premier.

Pashinian said that his political team’s participation in possible snap elections administered by the HHK-led government would “depend on the atmosphere” in the country. He had earlier threatened to boycott such polls, saying that the current authorities would rig them.