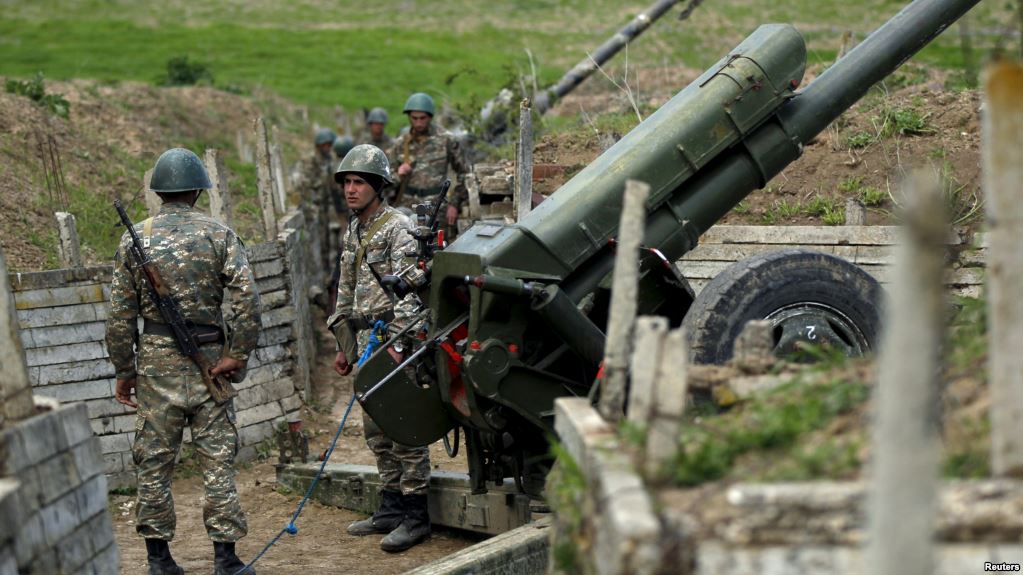 Ceasefire violations around Nagorno-Karabakh dramatically intensified early on February 25, with Karabakh’s Armenian-backed military saying that it repelled major Azerbaijani attacks at two sections of the frontline.

Azerbaijan’s Defence Ministry confirmed deadly fighting along the Karabakh “line of contact” but claimed that it is the Armenians who attacked its frontline positions.

The Karabakh Defence Army said Azerbaijani forces used demining machines and other “special means” when they attempted to seize its positions at frontline sections east and southeast of Karabakh early in the morning. They were pushed back, suffering significant casualties in the process, the army claimed in a statement.

“Several [Azerbaijani] corpses are lying in no man’s land,” said the statement. “Nobody was killed or wounded on the Armenian side.”

The Azerbaijani Defence Ministry, for its part, said Armenian troops “tried to penetrate our positions.” It reported a “heavy combat clash” in an area near southeastern Karabakh where “the enemy attempted to capture beneficial positions” but was forced to retreat.

“As a result of the combat clash, our armed forces suffered casualties,” ministry added, according to the APA news agency. It did not give any numbers.

The Karabakh Armenian army was quick to deny the Azerbaijani claims. “How can a defending side suffer casualties in no man’s land?” read an army statement released later in the morning.

Armenia’s Defence Ministry similarly accused Baku of seeking to “mislead its own people and the international community.” “Azerbaijan’s military-political leadership has been escalating the situation along the Line of Contact and spreading disinformation for several days,” the ministry spokesman, Artsrun Hovannisian, wrote on his Facebook page.

He added, “the Armenian side is observing the ceasefire regime and calling on the Azerbaijani side to refrain from steps aimed at further escalating the situation.”

U.S., Russian and French mediators urged the parties to the Karabakh conflict to “adhere strictly” to ceasefire agreements immediately after hosting a meeting between the Armenian and Azerbaijani foreign ministers in Munich on February 16. The three co-chairs of the OSCE Minsk Group warned that “war is not an option.”

The mediators also renewed their calls for the warring sides to implement confidence-building agreements that were reached by the Armenian and Azerbaijani presidents last year. The agreements envisage international investigations of truce violations and deployment of more OSCE observers in the conflict zone. Armenia says that Azerbaijan has been dragging its feet over these safeguards.

Such violations have steadily intensified in recent weeks after several months of relative calm that followed four-day hostilities around Karabakh in April 2016. The two sides have accused each other of using mortars and rocket-propelled grenades on a virtually daily basis.

On February 18, Armenian President Serzh Sarkisian warned Azerbaijan against launching large-scale military operations in the run-up to Armenia’s parliamentary elections scheduled for April 2. “Today some in Azerbaijan still have illusions that an Armenia focused on elections will be very distracted and therefore vulnerable … Any [armed] provocation would receive a worthy response,” he said.