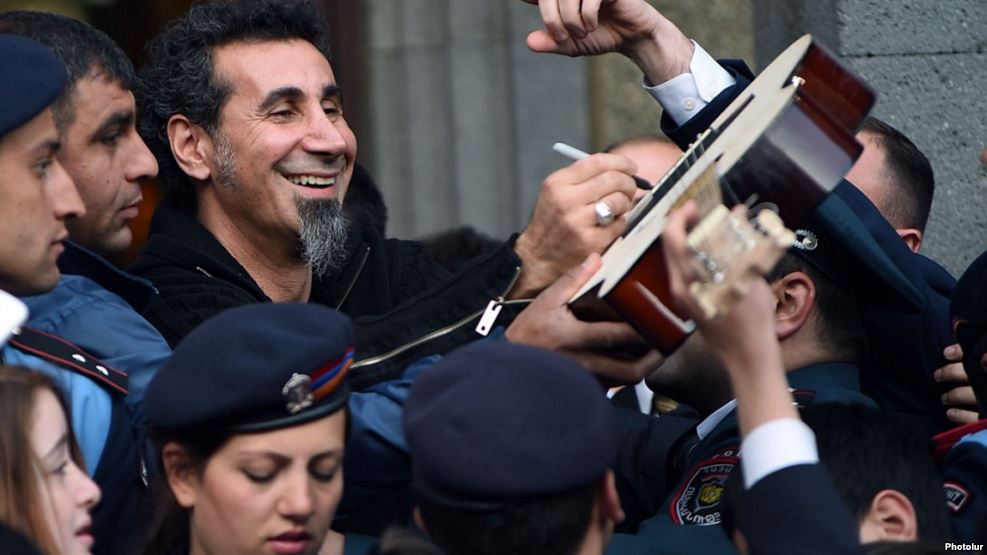 (RFE/RL)- Rock musician Serj Tankian and other prominent Diaspora Armenian artists have called on Armenia’s government to end widespread corruption, respect laws and hold democratic elections, in a joint appeal which they hope will speed up democratic change in the country.

The signatories described themselves as a Justice Within Armenia coalition that will seek to promote profound reforms in their ancestral homeland.

“We say NO to systematic corruption, monopolies, judicial inequality, police brutality, partisan politics, unequal rights, national depopulation, and elections tainted by fraud, all of which have contributed to the ongoing unrest,” reads their petition released last week on the 25th anniversary of Armenia’s independence.

“We say YES to the equality of all people, the fundamental preservation and protection of human rights, direct engagement in fair and transparent elections, respect for the rule of law, fair wages, separation of powers, a free press and advocacy for the disenfranchised,” it says. “We say yes to tangible, democratic change through civic engagement with the citizenry of Armenia.”

“Armenia can and should become a country of opportunity, creativity, democracy and hope in a region rife with turmoil. The alternative is unthinkable,” concludes the statement.

The petition was initially signed by about three dozen well-known individuals, virtually all of them ethnic Armenians living in Europe and North America. They include Tankian, filmmakers Atom Egoyan of Canada and Robert Guediguian of France, Canadian actress Arsinee Khanjian, American writer Chris Bohjalian and Alexis Ohanian, co-founder of the Reddit social media.

The signatories described themselves as a Justice Within Armenia coalition that will seek to promote profound reforms in their ancestral homeland.

Tankian urged other Armenians to sign the petition after it was posted on Change.org on September 21. “Independence means little when a large segment of the public are discontent,” the outspoken American rock star wrote on Facebook. About 2,300 people have signed the petition since then. “We are not proposing anything radical,” Egoyan told RFE/RL’s Armenian service. “We are proposing what’s in our constitution.”

“People in Armenia are the voter, not the Diaspora,” he said. “All we can do in the Diaspora is to make sure that the process of election is done properly.”

In that regard, Egoyan stressed the importance of Armenia’s next parliamentary elections slated for April 2017. “Arsinee [Khanjian] will be there for the elections,” said the filmmaker. “I’ll try to be there as well.”

Spincycle Diaries:  Chaos Theory – the explanation for my insanity?