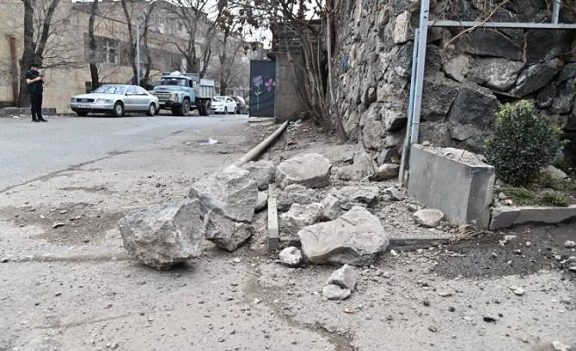 YEREVAN (Azatutyun.am)—A major earthquake struck Yerevan and surrounding areas on Saturday, causing many of their residents to rush out of their homes.

The earthquake measured at magnitude 4.7 on the Richter scale at its epicenter 8 kilometers southeast of Armenia’s capital, reported the national seismic protection agency. It said tremors were also felt in five of the country’s ten provinces.

According to the Armenian Ministry of Health, the quake did not kill or injure anyone. The ministry reported only minor injuries sustained by three people “as a consequence of panic caused by the earthquake.”

The Ministry of Emergency Situations urged local residents to stay outdoors shortly after Yerevan was jolted by the quake at around 3:30 p.m. local time. It said it has registered 46 aftershocks.

In another statement issued at 7 p.m., the ministry told people to return to their homes. “The analysis of available data shows that the likelihood of a powerful earthquake is low,” it said.

The quake appeared to have caused no serious material damage in or outside Yerevan. The Ministry of Emergency Situation reported tentatively that it damaged only one house and three buildings in the city of one million.

A magnitude 4.7 earthquake struck another Armenian region on February 5. It too did not result in casualties. The authorities warned on February 6 that more “earthquakes of low or medium magnitude” could occur in the days ahead.

Armenia is located in a seismically active zone and earthquakes are a regular occurrence there. The most powerful quake in the country’s modern history killed in 1988 more than 25,000 people and left hundreds of thousands of others homeless.