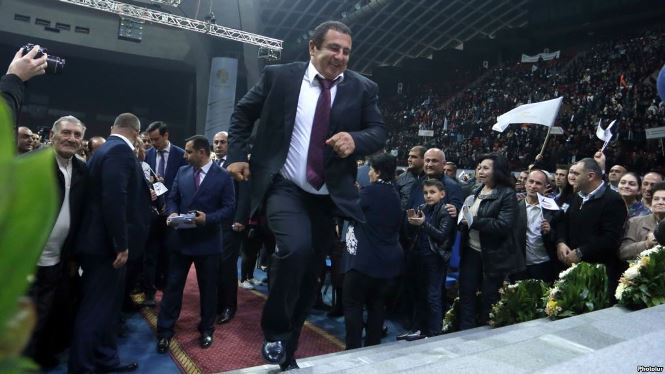 Businessman Gagik Tsarukian walks to the podium during an election campaign rally in Yerevan, 28Mar2017.

Gagik Tsarukian, one of Armenia’s richest men, claimed on Tuesday that his alliance is headed to victory in this Sunday’s parliamentary elections.

He said the election campaign has demonstrated that the Tsarukian Bloc enjoys “the unconditional trust of the people” and urged its activists to make sure that all votes are properly counted on election day.

“The people’s votes must go to the one whom they trust,” Tsarukian told thousands of supporters rallying in Yerevan’s largest concert hall. “We don’t need others’ votes. We will take care of our votes and ensure victory and turn our people’s expectations into reality.”

The bloc’s campaign manager, Ishkhan Zakarian, also predicted an election victory for Tsarukian when he opened the gathering. Tsarukian has conducted a “brilliant” election campaign, he said.

In his speech at the rally, the tycoon claimed that his unnamed foreign business “partners” have pledged to invest as much as $15 billion in Armenia if he wins a majority in the next National Assembly. “Seeing this unconditional popular support … and seeing that we are going to win … my partners have been calling me for the last five days and saying that they are ready to invest $15 billion in our country,” he decreed.

The figure cited by Tsarukian exceeds Armenia’s annual Gross Domestic Product. It was clearly meant to counter Prime Minister Karen Karapetian’s regular promises to attract $3.2 billion in investments in the struggling Armenian economy in the coming years. Karapetian is leading the election campaign of the ruling Republican Party of Armenia (HHK).

Citing its latest opinion poll, Russia’s leading state pollster, VTsIOm, said on Tuesday that the Tsarukian Bloc and the HHK continue to lead in the Armenian parliamentary race, enjoying the backing of 22 percent and 21percent of likely voters respectively. VTsIOM stressed, though, that the HHK is the clear election favorite because of the strength of its individual candidates, many of them wealthy individuals holding sway in various parts of the country. Armenia’s new and complicated electoral system of proportional representation allows them to significantly improve their party’s nationwide performance through their own strong showings.

The HHK is therefore on course to garner 44 percent of the vote, while the Tsarukian Bloc should get only 36 percent, according to the Russian poll commissioned by a pro-government Armenian TV channel. Presenting its finding, the VTsIOM director, Valery Fyodorov, said only two or three other groups are likely to win seats in the new Armenian parliament. He singled out the opposition Yelk alliance.

The pollster admitted at the same time that the overwhelming majority of Armenians are unhappy with the socioeconomic situation in the country. “In recent weeks, the number of optimists has fallen while that of pessimists has risen a little,” Fyodorov told reporters.

Pre-election opinion polls conducted in Armenia have long been distrusted by the opposition and most independent observers. Their findings have usually mirrored the official results of presidential and parliamentary elections marred by fraud allegations.

Ohanian Bloc Vows To Fight On