Ohanian Bloc Vows To Fight On 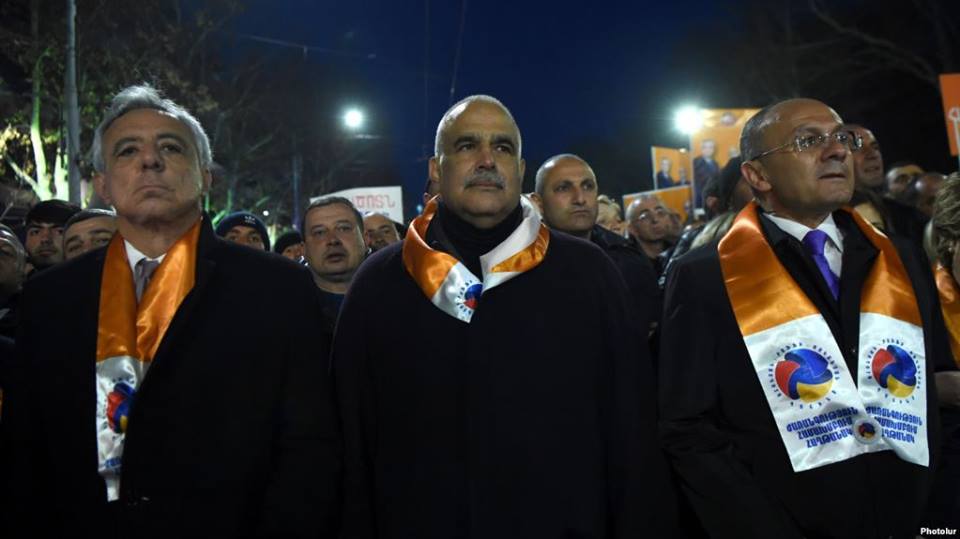 (RFE/RL)- Former Defense Minister Seyran Ohanian and his opposition allies rallied several thousand supporters in Yerevan on Tuesday, again calling on Armenians to use the upcoming general elections to change their government.

The leaders of the Ohanian-Raffi-Oskanian (ORO) alliance also renewed their demands for the release of Samvel Babayan, a retired army general allied to them who was arrested last week on charges of illegal arms possession.Many of their supporters held Babayan’s pictures as they rallied in Yerevan’s Liberty Square.

“I and my teammates are in a resolute mood,” Ohanian told the crowd before it marched through the city center. “I believe that we do have a strong fist to give power to the people, the real master.” “If peace is not just, it can never be real,” Oskanian said in his speech. He claimed that the authorities arrested Babayan, who is Karabakh’s former military commander, in order to be able to continue their “traitorous negotiations” with Baku.

Babayan’s lawyer said on Monday that his client does not consider himself a political prisoner despite denying the charges levelled against him.

The ORO leaders declined to clarify what they will do if they conclude that Sunday’s elections were rigged in favor of the ruling Republican Party of Armenia (HHK).

“We will stand with the people. We will do that the people tell us,” Ohanian told RFE/RL’s Armenian service (Azatututyun.am) vaguely. He said ORO’s possible post-election actions will be “legal” and “peaceful” but did not elaborate.

Ohanian began criticizing the Armenian government shortly after he was sacked as defense minister in October. He held the cabinet post for more than eight years.