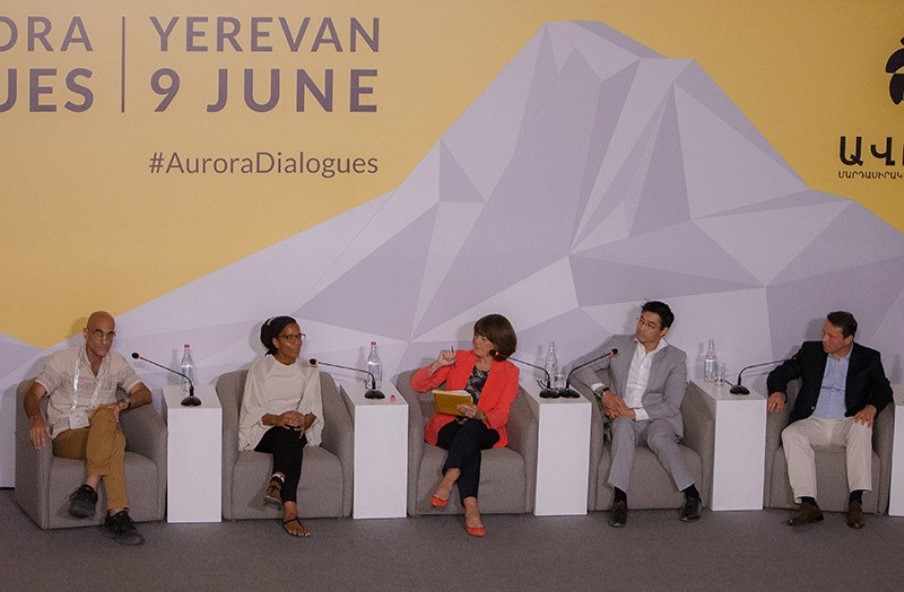 On June 9, 2018 the Aurora Humanitarian Initiative hosted the third annual Aurora Dialogues, entitled “Inspire, Empower, Impact.” The conference was made possible by the support of the Federal Foreign Office of Germany and through the collaboration with the Global Perspectives Initiative (GPI). The Dialogues, attended by prominent humanitarian and human rights figures such as Co-Founder of Médecins Sans Frontières Bernard Kouchner and former US Ambassador to the United Nations Samantha Power, explored sustainable solutions to meeting the needs of vulnerable communities around the world.

Samantha Power, Aurora Prize Selection Committee Member, then highlighted the importance of international diplomacy and grassroots action to make a difference to the refugee crisis. On changing the narrative around humanitarian issues Ambassador Power said, “We need to put faces on crises. People are so overwhelmed right now by the scale of suffering and tragedy.”

Preethi Nallu reflected on the media’s responsibility to provide insight into crises. “So much information is thrown at us at such a rapid rate that we’re often reducing very complex narratives and experiences into digestible content. We’re creating black and white narratives that simply do not start the conversations that can help a lot of people at the heart of displacement, and rehabilitating their communities,” she said.

Alice Greenwald, President and CEO of the National September 11 Memorial and Museum, introduced a session of inspiring one-to-one conversations between members of the Selection Committee and the 2018 Aurora Prize Humanitarians.

“At a time when lack of empathy for the misfortunes of others is routinely demonstrated, promoted, and even at times legislated, there is no more effective way to champion the value and urgency of action in support of others than to celebrate the stories of those who step up. These stories must be told, they need to be remembered, but most importantly, we need to learn from them,” said Ms. Greenwald.

Castillo explained the inspiration that drives them to continue fighting for the most vulnerable around the world.

“I’m a firm believer in local solutions for local problems. We are able to reach much bigger milestones in addressing community needs when we get this unconditional support that comes in, however small, versus large grants that have us focusing on the technical side of operation,” said Umra Omar, Founder of Safari Doctors when discussing the impact of grassroots action.

Aurora Co-Founder Noubar Afeyan concluded the Aurora Dialogues by saying: “All of us are the beneficiaries of some sort of intervention that helped us achieve or survive. The more one achieves, the more one can feel a debt of gratitude that can get converted for those most in need. The more that creates impact, the more it will spread gratitude in action.”

The third annual Aurora Dialogues Yerevan event was held at the Matenadaran, the Institute of Ancient Manuscripts, in Armenia as a part of a weekend of special events to celebrate the 2018 Aurora Prize.

More information on the 2018 Aurora Dialogues, Humanitarians, weekend of events and Humanitarian Index can be found here.