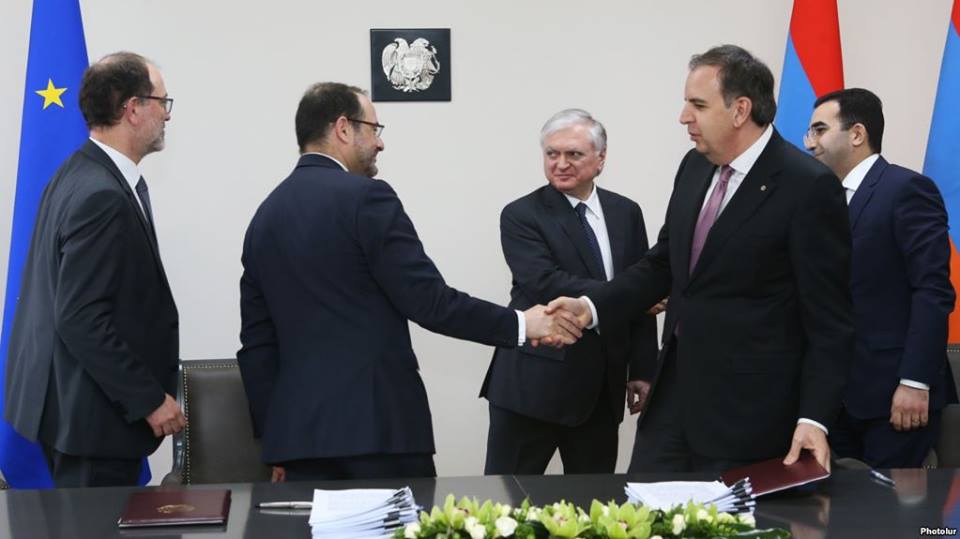 Armenia and the European Union formally initialed on March 21 the text of a new agreement on deepening their political and economic links.

Their negotiations on the Comprehensive and Enhanced Partnership Agreement (CEPA) were concluded ahead of President Serzh Sarkisian’s visit to Brussels late last month.

“The Agreement will be an important step to broaden the scope of bilateral relations between Republic of Armenia and the European Union,” the two sides said in a joint statement issued after their senior negotiators initialed the deal at a ceremony in Yerevan.

Foreign Minister Edward Nalbandian said at the ceremony that the CEPA will “open a new page” in EU-Armenia ties. According to the Armenian Foreign Ministry, Nalbandian also expressed confidence that it will be signed “in the course of this year.”

The CEPA is meant to serve as a less ambitious substitute for an Association Agreement negotiated by Armenian and EU officials in the summer of 2013. Sarkisian scuttled that agreement with his unexpected decision in September 2013 to make Armenia part of the Russian-led Eurasian Economic Union (EEU). The U-turn was widely attributed to strong Russian pressure.

The alternative deal, which has not been publicized yet, apparently contains the main political and some economic provisions of the cancelled Association Agreement. But it has no free trade-related component due to Armenia’s membership in the EEU.

“Strong commitments to democracy, human rights, and the rule of law, underpin the new agreement and Armenia-EU future cooperation,” read the joint statement. It said the CEPA will also pave the way for closer EU-Armenia in the areas of energy, transport and environment protection as well as “new opportunities in trade and investments.”

“Our people regard themselves as Europeans,” Sarkisian declared during his trip to Brussels. He said “shared values” are at the heart of the CEPA. In that context, he reaffirmed his administration’s pledges to ensure that Armenia’s upcoming parliamentary elections meet democratic standards.

Earlier this year, the EU provided Armenia with over $7 million in funding for the purchase of special electronic equipment designed to prevent some forms of electoral fraud.