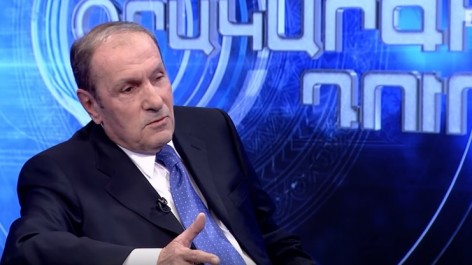 (RFE/RL)- Former President Levon Ter-Petrosian has reaffirmed his strong support for a compromise solution to the Nagorno-Karabakh conflict that has been proposed by the United States, Russia and France for the past decade.

“There can be no other [realistic] solution,” Ter-Petrosian said in a rare interview with Armenian Public Television aired late on Tuesday.

The opposition leader referred to the Basic Principles of the conflict’s resolution that were first put forward by the U.S., Russian and French co-chairs of the OSCE Minsk Group in Madrid in 2007. The framework accord calls for a phased settlement that would start with Armenian withdrawal from virtually all districts around Karabakh. It would end with a referendum in which Karabakh’s predominantly Armenian population would determine the disputed territory’s internationally recognized status.

Ter-Petrosian described the proposed referendum as a “great victory and achievement” for the Armenian side. “We could only dream about that in 1988,” he told the state-run broadcaster.

“The people elected [this government] and they must demand one thing: ‘Solve this problem, end our suffering and everyday deaths of our sons.’ The peoples of Armenia and Azerbaijan must force their governments to opt for peace,” declared the 72-year-old politician.

Ter-Petrosian, who served as Armenia’s first president from 1991-1998, stressed that only his Congress-HZhK alliance and President Serzh Sarkisian’s Republican Party (HHK) support this peace formula in one way or another. He slammed other major contenders in Armenia’s upcoming parliamentary elections, saying that their tougher positions on the Karabakh issue are “fairy tales that have nothing to do with reality.”

The HHK spokesman, Eduard Sharmazanov, welcomed the ex-president’s remarks on Wednesday. “It is very important that the first president of the republic acknowledges that the current authorities were elected and are taking no steps in the Nagorno-Karabakh conflict that go against our national interests,” he told RFE/RL’s Armenian service (Azatutyun.am).

“Furthermore, he pointed out that the Madrid document … adopted by our government as a basis [for further negotiations] is not a sellout,” added Sharmazanov.

Ter-Petrosian already expressed readiness to help the Sarkisian administration reach a peace deal with Azerbaijan along these lines in a speech delivered last December. He stood by his view that peace with Azerbaijan is vital for Armenia’s security and prosperity. A Karabakh settlement is the central theme of his bloc’s election campaign.

The December speech drew criticism from other opposition groups and the HHK. In particular, representatives of the ruling party said that the Azerbaijani leadership is currently not prepared to reciprocate Armenian concessions.

In his latest televised remarks, Ter-Petrosian claimed that Yerevan and Baku now disagree on only “two or three issues” relating to the repeatedly modified Basic Principles. He declined to disclose these sticking points, while expressing confidence that the conflicting parties will overcome them soon.

“There are now new circumstances which make me optimistic that this problem will definitely be solved in the near future,” he said. “I can’t say [whether this will happen] within days, weeks or months, but it will be solved.”

Ter-Petrosian added that his optimism is based on his belief that Russia is increasingly keen to end the Karabakh status quo and that Western powers will only back Moscow in this endeavor.