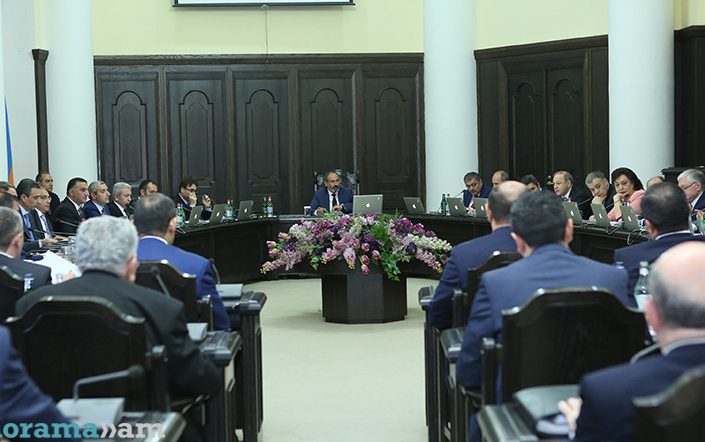 Five of them are members and supporters of Pashinian’s Civil Contract party aged between 28 and 38. They include Ararat Mirzoyan, who will serve as the first deputy prime minister.

A historian by education, Mirzoyan is one of Pashinian’s closest associates. The 38-year-old was elected to the Armenian parliament last year on the ticket of the Yelk alliance comprising Civil Contract and two other parties.

Another newly appointed deputy prime minister is the 29-year-old Tigran Avinian, who has been a spokesman for the Pashinian-led protest movement that brought down Armenia’s previous government headed by Serzh Sarkisian. Avinian holds a master’s degree in finance from Queen Mary University of London. He set up a software company in 2014 and has managed it until now.

A senior Civil Contract member, Arayik Harutiunian, was appointed as minister of education and science. Harutiunian, 38, has run a master’s program in Arab studies at Yerevan State University since 2007. He was elected to Yerevan’s municipal assembly last year.

Another party figure, Suren Papikian, was named minister for local government. Papikian, 32, has worked as a history teacher in two Yerevan schools since 2010.

The youngest appointee, is the 28-year-old Mkhitar Hayrapetian. He will work as Diaspora minister.

The crucial post of defense minister was given to Davit Tonoyan, the outgoing minister for emergency situations. Tonoyan, 49, was the country’s first deputy defense minister from 2010-2017. A graduate of Russia’s Military-Diplomatic Academy, he represented the Armenian military at the NATO headquarters in Brussels from 1998-2007.

Pashinian will initiate other cabinet appointments in the coming days. He will reportedly give four or five ministerial portfolios to businessman Gagik Tsarukian’s alliance which sided with him in the recent standoff with the Sarkisian government.

Although Sarkisian’s Republican Party of Armenia (HHK) still controls the majority of seats in the parliament, Pashinian’s cabinet is widely expected to receive a de facto vote of confidence later this month or early next. The new premier, who will turn 43 on June 1, has said that he will push for fresh parliamentary elections after forming his government. It is not yet clear when such polls might be held.