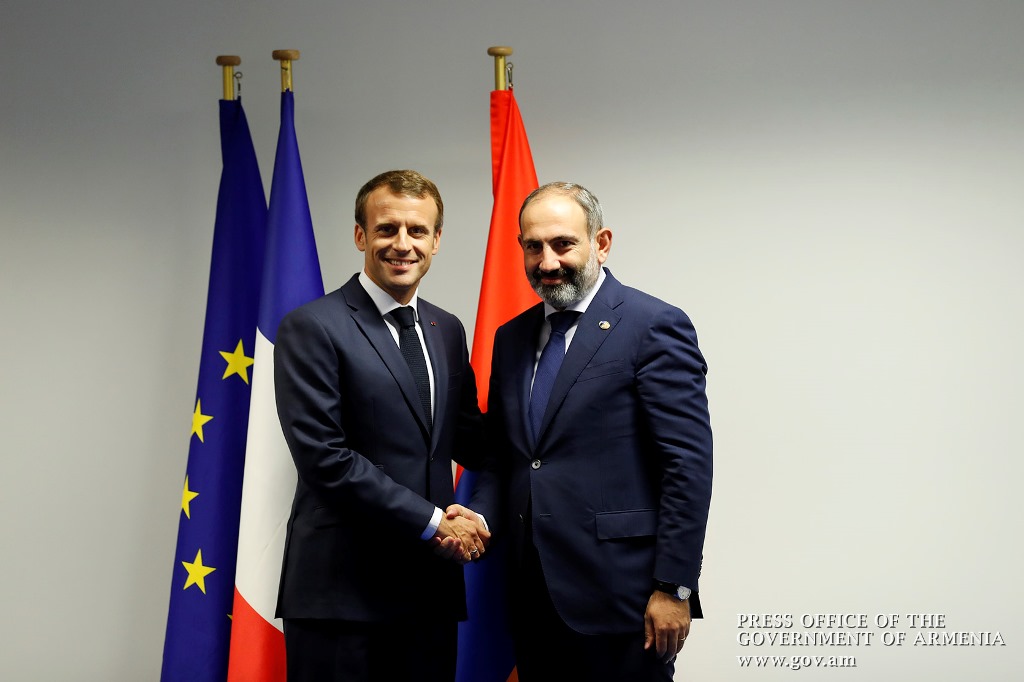 BRUSSELS—Prime Minister Nikol Pashinyan is on his first official visit to the European Union capital, where on Wednesday he met with French President Emanuel Macron and shared his vision of Armenia’s future with European officials. Pashinyan is in Brussels to attend the NATO Summit.

During his meeting with Macron, Pashinyan said that under his leadership, the Armenian government will continue to strengthen the already robust relations with France, saying that the changes in Armenia have created a climate for increasing investment and more economic cooperation.

The focal point of the meeting was the upcoming summit of French-speaking nations, known as Francophonie, to be held in Yerevan in October. Macron told Pashinyan that he was looking forward to his visit to Armenia. Pashinyan said that the summit will provide an opportunity for Francophonie nations to explore new and innovative opportunities for advancing ties and furthering economic cooperation.

In addressing the continuing efforts to resolve the Karabakh conflict, Pashinyan told Macron that any effort to use military force in the resolution process must be viewed as an attack and an affront to democracy and human rights.

At the start of the meeting, Pashinyan congratulated Macron on France’s advancement to the World Cup finals, which will be held on Sunday against Croatia, whose team beat England on Wednesday to advance to the finals.

After his meeting with Macron, Pashinyan met with Federica Mogherini, the EU High Representative for Foreign Affairs and Security Policy.

The two leaders discussed the Comprehensive and Enhanced Partnership Agreement that was signed last year between Armenia and the European Union.

Pashinyan emphasized that for Armenia democracy is not a foreign policy posturing but rather a guiding principle, which he said his government is committed to uphold and advance.

“You can lean on us on your road to making fundamental reforms to advance rule of law, fight against corruption, defending human rights and other spheres,” said Mogherini. “I am confident that our cooperation will have a bright future. We are ready to assist the reforms taking place in your country.” Earlier Wednesday, Pashinyan visited the Carnegie Europe Research Center where he met with various EU officials and introduced his vision on Armenia’s future and its relations with Europe. “We have overcome our own fears and carried out a revolution of love and tolerance, by eliminating the self-reproduced power, telling ourselves and the world that we will never allow for one person to make decisions on behalf of all of us. The citizen of Armenia overcame such brutal phenomena as corruption, injustice and ineffective governance. We are at a new stage of building a more prosperous, inclusive and modern Armenia by implementing rapid reforms,” said Pashinyan at Carnegie Europe.

“The new Armenian government will take all necessary steps to eradicate all obstacles that slow down our development,” said Pashinyan who ensured his interlocutors that Armenia was not going to make drastic changes in foreign policy.

Reiterating Armenia’s commitment to a peaceful resolution of the Karabakh conflict, Pashinyan said that there were not alternatives to the self-determination of the people of Artsakh.

He considered the fight against all forms of corruption as a priority and added that several major corruption cases have already been unraveled.

“Today people who previously had a privileged status, feel the complete force of justice. All cases will be investigated strictly in accordance with the law,” said Pashinyan adding that another important commitment is to organize free and fair elections.

“Now the citizens of Armenia know that their voice has an impact. From now on there will be no chance to falsify the election process and undermine the citizens’ trust. Therefore, we have launched a process on making changes to the Electoral Code. We will ensure the independence of the judiciary,” said Pashinyan, explaining that these steps will create a favorable climate for economic development, which is considered by the government as a key component of Armenia’s national security.

Pashinyan said that his government wants to create equal conditions in every economic sphere to ensure fair competition, pointing to some of the rapidly growing areas in the Armenian economy that include the IT sector, tourism and agriculture.
“Our geographic position, human resources, our balanced foreign policy are the characteristics of our country’s competitiveness, and our society inspires me to be confident that we are on the right path. We are a full member of the Eurasian Economic Union (EAEU) which has opened huge opportunities for our economic development. Armenia is ready to bridge the interests and positions of the EAEU and EU which is acceptable for both sides,” said Pashinyan.

The prime minister emphasized that the EU has been a key partner for Armenia in implementing comprehensive, institutional and legal reforms.

“The signing of the Comprehensive and Enhanced Partnership Agreement with the European Union turned a new page in Armenia-EU relations. The effective implementation of the CEPA will contribute to strengthening democracy and human rights, creating a better investment climate, increasing business stability,” added Pashinyan.