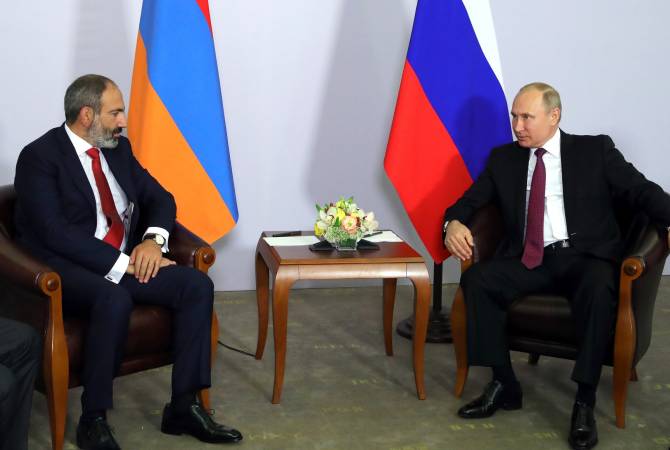 “I want to wish you success in the post of the head of government,” Putin told Pashinian in his opening remarks at their first-ever face-to-face talks. “I hope that our relations will develop as steadily as has been the case until now and we will be working together just as actively in the international arena, in international organizations … in the area of security and in the area of economic development.”

Russia continues to regard Armenia as “our closest partner and ally in the region,” he said, pointing to close defense and security ties as well as economic cooperation between the two nations.

Putin went on to praise recent years’ rapid growth in bilateral trade and, in particular, Armenian exports to Russia. He said he hopes that Yerevan and Moscow will “not only preserve but also multiply” that “very good dynamics.”

For his part, Pashinian again made clear that Armenia will remain allied to Russia during his tenure. “Nobody has cast doubt and, I think, will cast doubt on the strategic importance of Russian-Armenian relations,” he said.

The new premier, who swept to power as a result of huge street protests that rocked Armenia last month, also praised Moscow’s “balanced” and “very constructive” reactions to the protest movement led by him. “That is appreciated not only by our government but also the Armenian society,” he said.

Moscow has closely watched the political turmoil in Armenia that followed former President Serzh Sarkisian’s attempt to extend his decade-long rule. In their public statements, Russian officials have avoided taking sides in the standoff that led to Sarkisian’s resignation on April 23. They have said only that they expect the Russian-Armenian relationship to remain unchanged.

Putin was very quick to congratulate Pashinian on being elected prime minister by the Armenian parliament on May 8. The two men spoke by phone hours after the parliament vote.

They met in the Russian Black Sea city just before the start of a summit of the Eurasian Economic Union (EEU), a trade bloc comprising Russia and four other ex-Soviet states.

Pashinian has repeatedly stated in recent weeks that he will not pull Armenia out of the EEU and another Russian-led bloc, the Collective Security Treaty Organization (CSTO). The 42-year-old former opposition leader has previously criticized Armenia’s membership in the EEU and the CSTO.