Sen. Markey Says ‘No Choice But to Recognize Artsakh’ Since Baku Continues ‘Illegal Use of Force’ 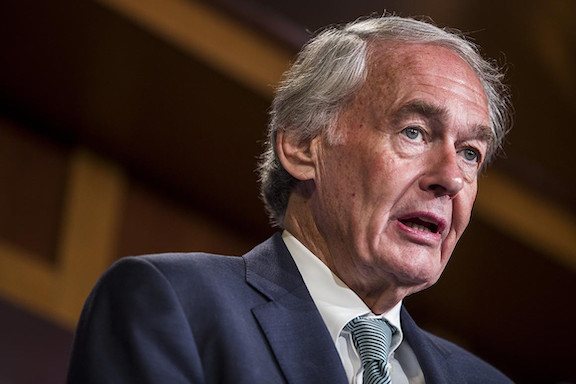 WASHINGTON, “Asbarez”—Senator Edward J. Markey (D-Mass) on Tuesday urged Secretary of State Mike Pompeo to seek an immediate ceasefire between Armenia and Azerbaijan, and push for a negotiated resolution to the conflict over Nagorno Karabakh that has been ongoing since late September.

On Friday, Secretary Pompeo is scheduled to meet separately with Azerbaijani Foreign Minister Jeyhun Bayramov and Armenian Foreign Minister Zohrab Mnatsakanyan. Along with France and Russia, the United States serves as a Co-Chair of the OSCE Minsk Group. Two earlier proposals for a humanitarian truce, brokered first by Russia and then France, were immediately violated. The fighting has claimed hundreds of civilian lives with reports that Turkey has transported members of Syrian militias to fight against the Armenian people.

“Secretary Pompeo should make it clear that the United States supports a peaceful resolution to this conflict and is ready to help facilitate negotiations. In order to achieve a successful cease-fire and conditions for peace, other parties such as Turkey must cease their aggressive actions and military intervention. The U.S. should immediately push for a cease-fire along the line of contact between Nagorno-Karabakh and Azerbaijan and a speedy return to negotiations supported by the Minsk Group. Since Azerbaijan continues its attempts to resolve this conflict through the illegal use of military force, the international community will be left with no choice but to move to recognize the independence of the Republic of Artsakh, absent meaningful negotiations.”

“Secretary Pompeo must also make it clear that Section 907 of the Freedom Support Act will be fully enforced and thus terminate U.S. security assistance to Azerbaijan. Moreover, Secretary Pompeo and President Trump, who have developed close ties to Turkish President Erdogan, should make it clear to their authoritarian friend that further engagement in this conflict will cost Turkey its military assistance and warm relationship with the Administration.”

“We welcome Senator Markey’s principled stand for democracy and self-determination for the Artsakh Republic,” said Armenian National Committee of America’s Executive Director Aram Hamparian. “Azerbaijan – which has never held a valid historical or legal claim to Artsakh – strengthens the case for global recognition of Artsakh’s independence every time it commits a new war crime against the Republic’s civilian population.”