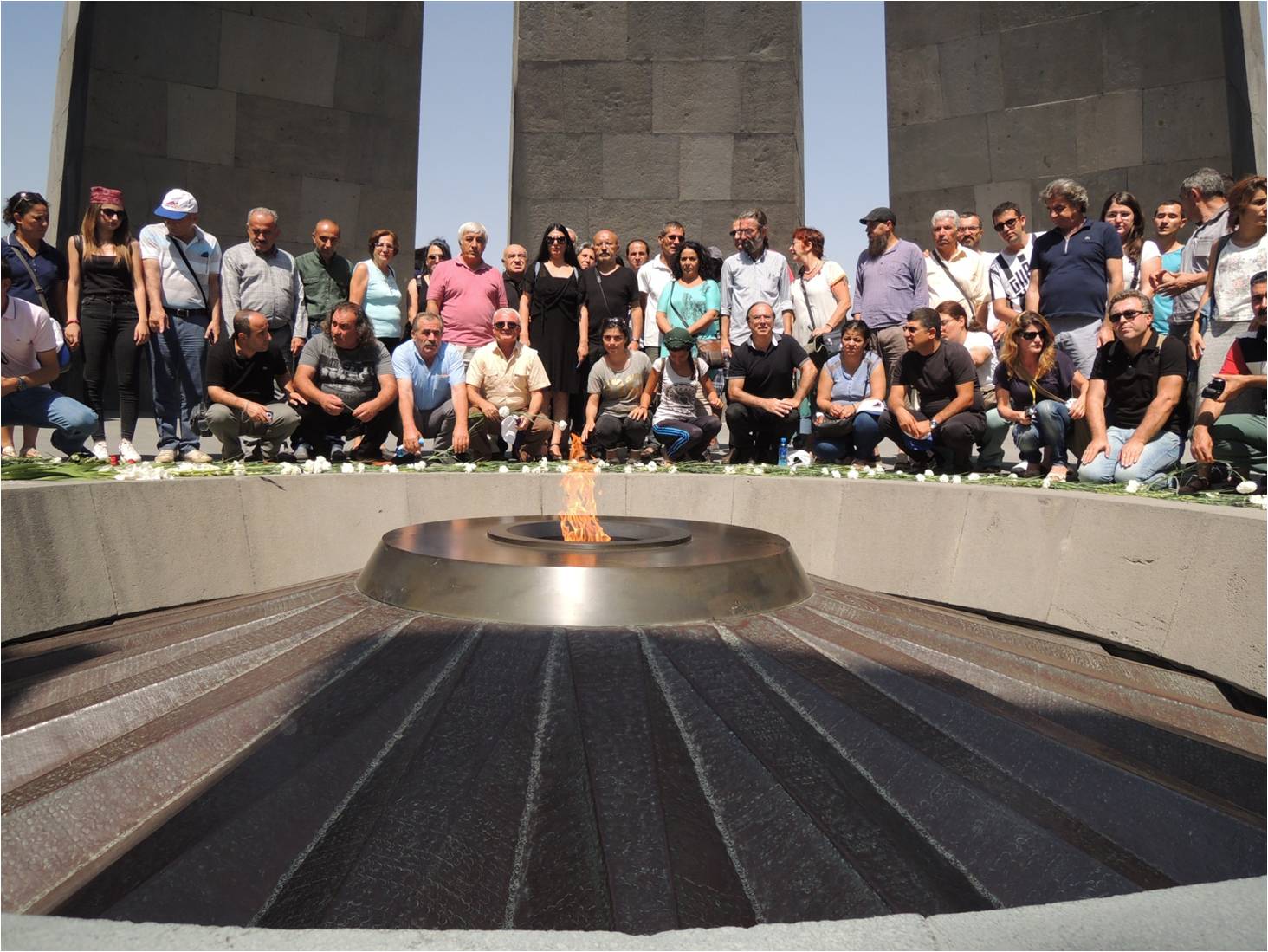 This article will summarize the new reality of hidden and no more hidden Armenians in Turkey. It will also explain the significance of this reality and the objectives of Project Rebirth in advancing it.

Hidden Armenians are the present generation descendants of Armenian orphans left behind in Turkey after the 1915 Armenian Genocide. These orphans, the living victims of the Genocide, were forcibly assimilated, Islamized, Turkified and Kurdified in state orphanages, military schools, Turkish and Kurdish homes. In recent years, it has become apparent that they did not forget their Armenian roots and secretly passed them on to the next generations. In the early 2010’s, almost hundred years after the Genocide, certain events in Turkey triggered the hidden Armenians to have the courage to openly reveal their original Armenian identity in large numbers and return to their Armenian roots, language and culture. The most significant event triggering this new phenomenon was the 2011 reconstruction of the Surp Giragos Church in Diyarbakir/Dikranagerd, which acted like a magnet bringing the hidden Armenians together from various regions of Turkey. The planning, fundraising and the actual reconstruction of the church were followed by other events, such as piano concerts at the church, Armenian language classes, cultural events and conferences, Centenary Genocide Commemoration, and more critically, several organized trips to Armenia for hidden Armenians from Diyarbakir, Dersim, Van, Mush, Sasun, Urfa, Gaziantep, Istanbul and Hamshen regions of Turkey. In cooperation with the Armenian Ministry of Diaspora, hundreds of hidden Armenians were taken to cultural and historic sites in Armenia further encouraging their return to Armenian roots, language and culture, and in some cases also to get baptized into Christianity. All these activities were organized under the umbrella of the Project Rebirth initiative, which helped create a vast network of thousands of hidden Armenians, connected to me and more importantly to one another. For the past few years, I tried to explain the significance of the re-awakening of the hidden Armenians and Project Rebirth in numerous articles, and also a new book, to the Armenians in Armenia and Diaspora.

Once the hidden Armenians come out and openly declare their Armenian identity they face many difficulties, dangers and threats in Turkey, surrounded by a hostile state, neighbours, employers and sometimes even their own families who wish to remain Islam Turks or Kurds. Their situation has become even more precarious in the last three years due to the military clashes between the Turkish state and Kurdish militants who demand increased rights. The Turkish government forces occupied the newly reconstructed Surp Giragos Church and started using it as an army base, resulting in much damage to the altars and the interior of the church. In 2016, the government also expropriated the deeds of the church and more than 200 other properties belonging to it. The Surp Giragos Church Foundation immediately appealed the expropriation legislation to higher Turkish courts and was successful in reversing the expropriations and is now again the legal, rightful owner of the church and its properties. After numerous meetings with Turkish government officials, the Church Foundation also convinced the state officials to repair all the damages done to the church during the military occupation of the church, at state expense. In March 2019, the government called tenders for the repair work and the reconstruction of the church has now resumed. During these clashes in southeastern and eastern Turkey, along with the local Kurdish population, thousands of hidden Armenians also lost their homes and jobs. However, the hidden Armenians have survived despite all the risks. Instead of organizing Armenian classes, cultural events and trips to Armenia, Project Rebirth has tried to help by providing legal, financial, relocation, resettlement support to the suffering hidden Armenians.

SIGNIFICANCE OF HIDDEN ARMENIANS FOR THE REPUBLIC OF ARMENIA AND ARMENIANS

independent research and studies indicate that Armenian orphans left behind in Turkey and Armenians in certain regions allowed to convert to Islam in order to avoid massacres and deportation during the 1915 Armenian Genocide, add up to about 300,000. Since the population of Turkey increased seven times since 1915, the descendants of these forcibly Islamized hidden Armenians would number more than 2 million. Although there are no reliable figures about Armenian conversions to Islam during the 1894-96 massacres, the numbers are even larger than in 1915. The Hamshen Armenians, who were converted to Islam earlier in the 16th century but still speak a dialect of Armenian, number more than 200,000. It is difficult to arrive at numbers with certainty, but it can be stated that potentially there exists a genetically Armenian population in Turkey which may even exceed the current population of the Republic of Armenia, although these people are at present Islamized Turks or Kurds. There have been 35 Armenian baptisms of hidden Armenians at Surp Giragos Church, the first two baptisms in Armenia during Project Rebirth trips and several dozen in Europe. One can conclude that hidden Armenians returning to Armenian roots and Christianity are in the hundreds, returning to Armenian roots without converting to Christianity are in tens of thousands, remaining as hidden Armenians and aware of their Armenian roots are in hundreds of thousands, possessing Armenian genes or blood partially are in the millions.

The hidden Armenians generally live within Kurdish populated regions and usually vote for the pro-Kurdish party (HDP). Although Kurds have historically participated in the massacre and plunder of Armenians, the present generation of Kurds has started to acknowledge the Armenian Genocide and the Kurdish role in it. The HDP party mandate recognizes the Armenian genocide and pledges to bring legislation to the Turkish Parliament for official state recognition. The hidden Armenians, whether still hidden or openly declared no more hidden Armenians, continue voting as a bloc for increased democratization, human rights, citizen rights, language rights, freedom of speech as promoted by HDP. Once the current repressive and dictatorial government regime starts losing momentum, the HDP and the hidden Armenian vote would become increasingly more effective. One must also consider that there are significant numbers of hidden but undeclared Armenians actively involved in politics. The voting power of the hidden Armenians increasingly would help pass legislations friendly to Armenia or Armenians. Once organized, political decisions taken by hidden Armenians within Turkey would be much more effective than any initiative from outside Turkey.

3. Potential repatriation and investment of hidden Armenians to Armenia

Among the hidden Armenians who participated in the Armenia trips organized by Project Rebirth, several people expressed interest in obtaining citizenship in Armenia, move permanently to Armenia for retirement, and more significantly, to invest in Armenia. Project Rebirth has made contacts with several wealthy hidden Armenian entrepreneurs, businessmen, industrialists and investors who have established successful enterprises in Turkey, expanded to other countries such as Russia and Europe, and would be interested in starting trade or investments in Armenia. There have already been a few confidential donations from wealthy hidden Armenians in Turkey for infrastructure and church projects in Armenia.

4. Hidden Armenians as catalysts for potential improvement of relations between Armenians and Turks, Armenia and Turkey

5. Restoration and Return of Armenian Cultural Heritage, Churches, and Properties in Turkey

There are more than 4000 Armenian churches and schools left behind in Turkey after the Armenian population was murdered or deported during 1915. If not destroyed or burnt outright, these buildings

were converted to Turkish mosques, government buildings, schools, banks, community centres or private residences. There are also hundreds of abandoned Armenian cemeteries, and thousands of cross-stones, fountains and monuments. The hidden Armenians still living in the Armenian homeland have started and can increasingly organize the protection, restoration and return of these Armenian buildings and cultural heritage to Armenian ownership, once they become more effective politically, financially and legally.

1. Project Rebirth has already started the link between Armenia and the hidden Armenians of Turkey by organizing several trips for them to Armenia. These trips are now temporarily suspended due to the political difficulties and still dictatorial military situation in Turkey, but they are expected to resume once the conditions improve.

3. Armenian language classes for hidden Armenians should be planned by providing teachers from Armenia to live and teach eastern/western Armenian for a few months at a time in regions populated by hidden Armenians.

5. The long-term, ultimate objective of Project Rebirth is to delete the word ‘hidden’ from the term ‘hidden Armenians’, until all hidden Armenians in Turkey return to their roots. This can only be achieved with cooperation and support from the Republic of Armenia, Diaspora Armenian cultural organizations and NGOs, instead of being attempted by single individuals. There are encouraging signs that senior policy makers and planners within the government of Armenia have recognized this new reality.