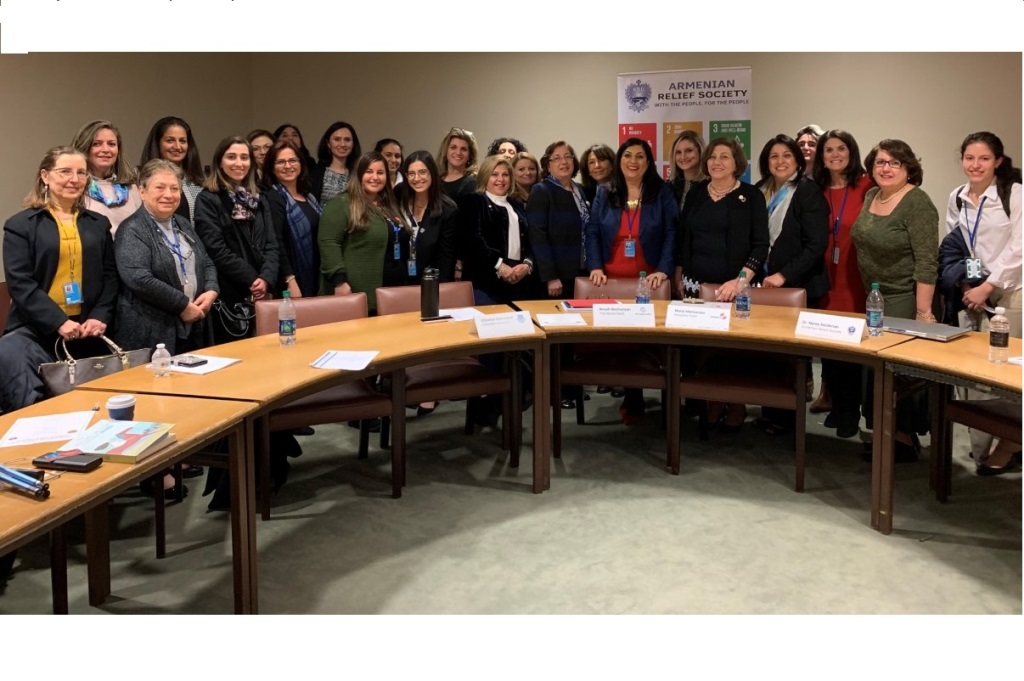 The panelists and some participants of the “Developing Infrastructure & Access to Public Services to Improve Gender Equality”, UN Headquarters, New York, March 11, 2019.

UNITED NATIONS—The Armenian Relief Society, in collaboration with the Permanent Mission of Armenia to the United Nations, held a panel discussion during the 63rd session of the Commission on the Status of Women (CSW) Conference entitled, “Developing Infrastructure & Access to Public Services to Improve Gender Equality” on March 11, at the UN Headquarters, which was attended by a large number of member states, U.N. agencies, and ARS and other NGO leaders.

Ambassador Mher Margaryan of the Permanent Mission of Armenia to the United Nations gave introductory remarks, highlighting the importance of the CSW and the commitment of member states, UN institutions, and civil society in advocating for gender equality.

The first panelist, Anush Bezhanyan, a Practice Manager from the World Bank, focused on the statistics highlighting gender disparities persisting in Armenia today. The second panelist, Maria Mehranian, Western US Regional Chairperson of Armenia Fund, gave an overview of the organization’s extensive background and emphasized its vital contribution to the development of Armenia’s infrastructure.

Mehranian who is an engineer by profession, focused on how infrastructure can potentially promote and advocate for women’s empowerment.

The last panelist was Dr. Nyree Derderian, the Vice-Chairperson of the Armenian Relief Society, who presented on the organization’s relief efforts within the Shirak Province immediately following the 1988 Armenia Earthquake.

Dr. Derderian presented on ARS’s programs of “Soseh” Kindergartens and the Akhourian “Mother and Child” Health & Birthing Center, highlighting the importance of partnerships between the civil society sectors and governments in order to effectively advance the needs of women and girls in the country.

The panel-discussion was moderated by the ARS UN Coordinator, Christina Mehranbod, who in her closing remarks thanked the organizations and reminded the audience that the Armenian Relief Society, the All Armenia-Fund, and the World Bank can be seen in the trenches every day working towards the empowerment of women and girls through their multifaceted programs.

The two-week conference of the UN CSW will focus on topics related to social protection systems, access to public services and sustainable infrastructure for gender equality and the empowerment of women and girls and has drawn over 9,000 participants from across the world.

Coming up this week, the ARS is also co-sponsoring another session—Subsistence Farming and Multisector Support for Social Protection of Nutrition— alongside the NGO Health Committee. Members of the ARS will also have an opportunity to attend numerous events in order to learn from other member states, UN agencies, and NGOs on how they can further advocate for women’s rights and promote gender equality.

“Developing Infrastructure & Access to Public Services to Improve Gender Equality” was the theme of a panel hosted by the ARS and Armenia’s Permanent Mission to the UN.