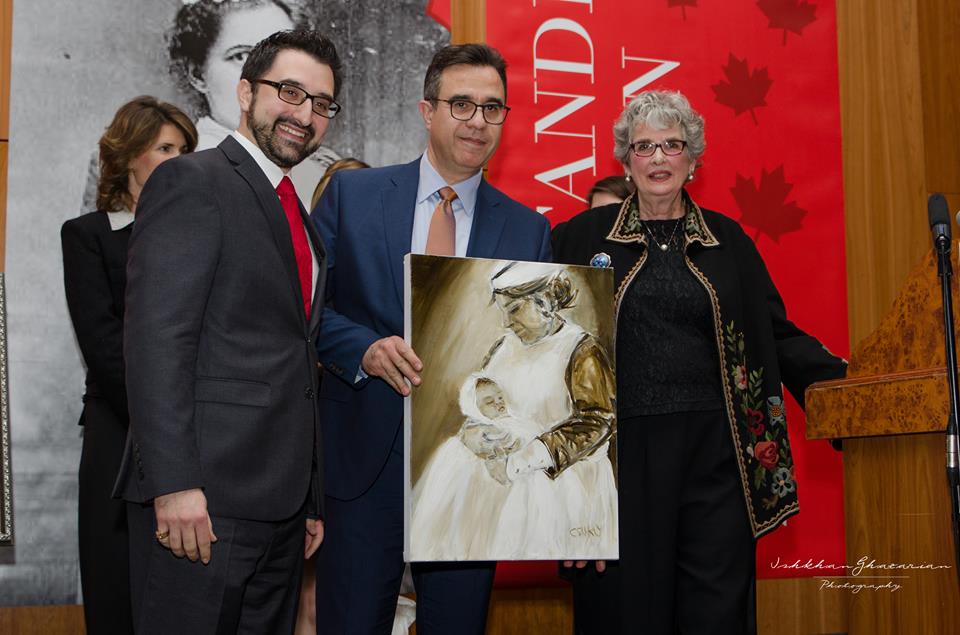 IMG. Corning’s grandniece Kristina Csukly presents one of her own paintings of her aunt holding a baby to the chairs of the Corning Education Centre Vatche Iskedjian and Raffi Sarkissian, November 26, Toronto.

On the occasion of the 150th anniversary of Canadian Confederation, the Armenian Community Centre of Toronto honoured a great Canadian humanitarian who, early in the last century, travelled to far away Asia Minor to save victims of a genocide during The Great War.

Sara Corning, a nurse from Nova Scotia, who is credited with saving over 5000 Armenian and Greek orphans in 1922 was posthumously named this year’s “Outstanding Canadian” by the Armenian Community Centre of Toronto in recognition of her selfless work.

Master of ceremonies Shahen Mirakian introduced the guests and talked about why the community centre decided to revive the award and why to bestow it posthumously. Since 2002, when the award was last presented, both the Parliament of Canada and the Government of Canada have recognized the Armenian Genocide. And since 2010 the Armenian community in Canada has welcomed around 5000 Iraqi and Syrian refugees. A “half century after her death, Sara Corning continues to add to her sterling legacy of faith, devotion and sacrifice,” he said.  “She remains an Outstanding Canadian, and for this reason, we honour her today,” added Mirakian. After dinner was served with the Arax Band playing in the background, Minister Joly took to the stage and praised the Armenian Canadians especially Montreal’s Armenian community whose institutions are centred in her riding of Ahuntsic-Cartierville. She acknowledged the remarkable efforts of all Armenian communities in accepting large numbers of Syrian Armenian refugees and helping them transition into active roles in their new country. At the end of her message, Minister Joly announced an allocation of $58,000 to the Armenian Community Centre “Empowering Cultural Diversity in the Classroom” project, which funds community engagement programs that promote intercultural understanding.

Joly also introduced Dr. Jean Augustine, who was the first African-Canadian woman to be elected to the Canadian House of Commons and the first to serve in the federal Cabinet.

Dr. Augustine spoke about the calling Sara Corning must have heeded when she embarked on a journey to a far away land and put her life in danger and rescue people in need. She counted lessons that we can draw from her example such as the indomitability of the human spirit, the great capacity to serve others, and the conviction of purpose. Augustine gave her own life’s example – she came to Canada in 1960 at a very young age with a dream. But she learned that only hard work and determination can make things happen and to impact change. She pointed out that her life too was influenced by her race, that she wasn’t immune to discrimination and prejudice. “The freedom rights and liberties we enjoy today are the result of bravery and sacrifice of people who came before us like Sara Corning,” she said and added: “to truly honour Sara Corning’s legacy, we should all ask ourselves how best we can do in our part to build upon that legacy.”

She concluded that Corning was an exceptional human being, worthy of being recognized for the Outstanding Canadian award.

Corning’s grandniece Kristina Csukly recalled how a kind and caring person her great aunt Sara was. She recounted instances where she would visit her and learn about her service in saving thousands of orphans who were trapped in Smyrna in 1922. She showed old family pictures which included an elderly Sara Corning late in life with family members.

Then Csukly was presented a painting by Toronto artist Gerard Paraghamian and in turn, she presented her own painting, which showed her great aunt holding an orphaned child, as a gift to the Armenian Community Centre.

Daron Keskinian, Armenian Community Centre board member, presented Corning’s bio and talked about her life in service to people in need. Born in Chegoggin, Nova Scotia, in 1872, Corning was trained as nurse in the United States and worked in New England. Her first experience with disaster relief was in 1917, when she helped 10,000 victims of the Halifax Explosion.

She joined Near East Relief and starting in 1919 helped rescue and care for thousands of Armenian and Greek orphans, often risking her life in the process. In 1922 during the Smyrna War Corning helped establish new orphanages and became responsible for running one. She adopted five girls and funded their education.  King George II of Greece awarded her with one of the country’s highest honours.

He then presented president of the Sara Corning Society, Jennifer Chown, and Sara’s great-niece, Judy Csukly the award- a commemoration coin minted on the anniversary of the signing of the Treaty of Nvarsak, a historical event that represent the persistence of Armenians in the face of great adversity.

Keskinian thanked Minister Joly for the funding that will help create a program consisting of digital and classroom components that will help educators and people to understand how crimes against humanity and genocide have impacted Canada and to promote respect for human rights and social justice.

Raffi Sarkissian, former chair of the Sara Corning Centre, talked about the centre’s educational initiatives consisting of developing teacher training, classroom visits and public lectures. He stated that the need for such a centre emerged after the Toronto District School Board (TDSB) decided to implement the Grade 11 Genocide and Crimes Against Humanity course which led to increase in the number of request for guest speakers and Armenian Genocide teaching material. One of the major requested topics was Canada’s humanitarian response to the Armenian Genocide.  Sarkissian and his colleague Daniel Ohanian thought that the exemplary work and sacrifices of Corning made her the natural choice for the name of their new centre. “The extraordinary level of care and love Sara displayed toward the Armenian orphans is the level we too try hard to achieve as we work to defend human rights through education” he said.

Among the achievements of the Centre are the development of online courses, and the presentation of two exhibits. In 2017, the Centre started an annual Ontario Senior Student Conference that focused on Justice for the Armenian Genocide which attracted over 180 students from 4 schools in three school boards.

The director of the Sara Corning Centre Vatche Iskedjian talked about the new Canada-wide program that will be teaching tools and resources to elementary and secondary students. Online modules will focus on past atrocities, Canada’s positive contributions in support of human rights, and the importance of multiculturalism in the prevention of prejudice.