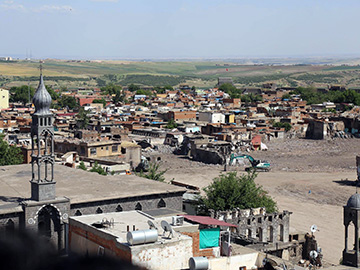 By Raffi Bedrosyan.  Special for the Armenian Weekly

What a difference a year makes…

It was August of last year, when Project Rebirth organized trips to Armenia for a large group of hidden Islamized Armenians from Diyarbakir, Urfa, Dersim, Sason, Van, and the Hamshen regions of Turkey, to help them find their roots, language, culture, and history.

It seems like decades ago, but it was last April, that a piano concert took place at the recently reconstructed Surp Giragos Church in Diyarbakir, to commemorate the Armenian Genocide Centennial—a concert attended by more than a thousand hidden Armenians. The regular monthly breakfast meetings of the hidden Armenians of Diyarbakir at the Surp Giragos Church have now become a distant memory. The Armenian language classes so enthusiastically attended by Islamized Armenians in Dersim and Diyarbakir have long been suspended.

As the organizer of the trips to Armenia, it was gratifying for me to receive emails from some of these no-longer hidden Armenians.

“Before I went to Armenia I was a Kurd, and I returned as an Armenian,” read one. “For years I fought for the rights of Kurds before I found out I was an Armenian at the deathbed of my father. Now I want to go fight in Artsakh (Nagorno-Karabagh/NKR),” read another.

In ever growing numbers, the hidden Armenians had started making contact with one another within Turkey, establishing links with people in Armenia and Diaspora.

And now? The past year has been a living hell for the hidden Armenians of Turkey. The civil war between the Kurdish resistance guerrillas and the Turkish army has resulted in massive destruction in southeastern and eastern Turkey. Most of the buildings in the region have been bombed or burnt by the army and police forces, followed by complete demolition and razing of the damaged buildings, creating vast open areas in many urban centers, with only a few mosques, police stations, or government buildings left standing.

Entire neighborhoods have disappeared, reduced to rubble. The Surp Giragos Church in Diyarbakir has escaped the fighting relatively intact structurally, with only broken windows and a large hole in one of the exterior walls. But the Turkish security forces have used it as an army base, desecrating the church, burning some of the pews as firewood, with garbage and smell of urine everywhere. The attached gift and souvenir shop is destroyed.

Several stores and houses in the adjacent blocks to the church, which were originally owned by the church and only recently returned to church ownership after years of negotiations, have now been demolished by the government, along with many of the historic narrow streets and buildings leading to the church.

At present, the church stands in the middle of a vast open area. But worst of all, in March 2016, the Turkish government passed legislation, expropriating the church and all of the properties belonging to it. The church is now closed to public. The Armenian church foundation has taken the expropriation to the Turkish courts, and in the case of an unsuccessful outcome at the Turkish courts, the intention is to take the matter to the European Court of Human Rights.

More than a million people have been displaced in the region, forced to flee to safer areas. Thousands of people have been killed or injured, including children and elderly, some burnt alive in the basements of apartment buildings while being bombed by the government forces. Thousands more have been fired from their jobs, arrested and jailed for “supporting terrorist Kurdish organizations,” especially intellectuals, teachers, lawyers, and journalists.

The democratically elected Kurdish mayors of most towns and cities in the region have been removed from their posts, arrested and jailed. The co-leaders of the Peoples’ Democratic Party (HDP), as well as several members of parliament, have also been arrested and jailed.

Following the failed coup attempt against President Erdogan in July, dictatorial powers and the state of emergency in Turkey have resulted in silencing of all opposition, media, intellectuals, and opinion makers.

The situation is worrisome and continues to get worse in Turkey, especially in the southeastern regions, with military operations within Turkey as well as across the border within Iraq and Syria. Although Turkey has pledged to fight against ISIS, it seems that their main fight is against Kurdish forces within Turkey, Iraq, and Syria. The Turkish army and police forces taunt the Kurdish guerillas with the ultimate insult, calling them “Armenian bastards.”

Our hidden Islamized Armenians living in the region suffer the same fate as the rest of the population, perhaps even worse. They are discriminated against, no matter where they go. The Kurds discriminate against them for not being “real” Kurds. The Turks discriminate and harass them even more, as they are brainwashed to hate and fear Armenians as perpetrators of genocide. If the hidden Islamized Armenians choose to go to Istanbul, they are discriminated against by the Armenians there. Until they satisfy the unreasonably strict requirements of the Istanbul Armenian Patriarchate and get baptized as Christians, they are not well received well by the Armenian community.

Naturally, the efforts of Project Rebirth to help the hidden Islamized Armenians find their Armenian roots, culture, and language by organizing Armenian language classes in places like Diyarbakir and Dersim, as well as planning trips for them to Armenia, are now on hold.

Instead, the efforts are now geared toward helping the hidden Armenians relocate away from the war zones into safe areas, and arranging lawyers for people who are arrested, jailed, or unfairly dismissed from work.

There have been major setbacks this year, with great human suffering and material losses. We have lost control, for now, of Surp Giragos Church in Diyarbakir, which was beautifully reconstructed after years of painstaking effort, sacrifice, and hard work. But we must remind ourselves that it has already served its main objective—the re-awakening of the hidden Islamized Armenians. This church has acted as a magnet, bringing together once hidden Armenians—the grandchildren of the living victims and orphans of the Armenian Genocide—who continue surviving and living on our own ancestral lands, albeit under very difficult conditions.