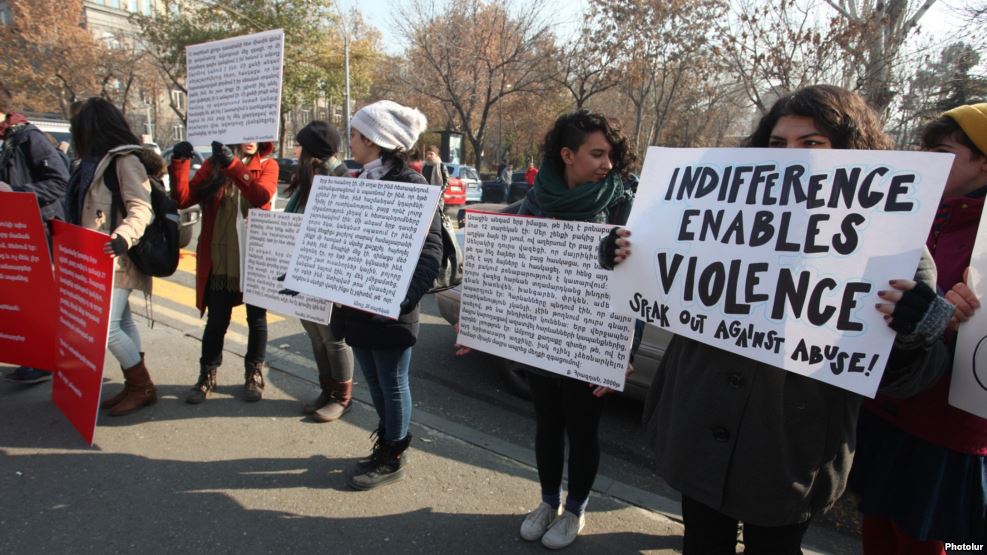 (RFE/RL)- Fifteen women have died in Armenia this year as a result of domestic violence, a coalition of women’s rights organizations said on Friday, demanding tougher government action against the practice.

The Coalition to Stop Violence Against Women released the alarming statistics as it marked International Day for the Elimination of Violence Against Women. Several dozen of its members picketed university buildings in downtown Yerevan, holding posters and handing out leaflets to passersby in a bid to raise public awareness of domestic violence.

“Unfortunately, girls are more indifferent and even disdainful,” one of the activists told RFE/RL’s Armenian service (Azatutyun.am). “They probably think that they won’t be at risk if they stay away. Guys listen to us with greater interest or perhaps irony.”

At least one man approached by the protesters questioned the wisdom of their campaign. “I’m not saying that I support violence,” he said. “But if violence happens, it must stay within a family.”

Violence against women had for decades been a taboo subject in the socially conservative and male-dominated Armenian society. It has been receiving growing publicity in recent years thanks to the activities of women’s rights groups backed by international human rights watchdogs.

“Spousal abuse and violence against women appeared to be widespread,” the U.S. State Department said in its most recent report on human rights practices in Armenia released last year.

“According to local observers, most domestic violence went unreported because survivors were afraid of physical harm, apprehensive that police would return them to their husbands, or ashamed to disclose their family problems,” it said.

According to the Coalition to Stop Violence Against Women, more and more Armenia women abused by their husbands or other relatives are coming forward. The grouping reported on Friday a year-on-year increase in the number of complaints received from abuse victims.

“In the last three years more than 30 women have been killed in Armenia due to domestic violence,” said Garik Hayrapetian, an expert with the Yerevan office of the UN Population Fund. “I think this figure is telling enough for us to have special legislation.”

Armenia still has no laws specifically aimed at tackling domestic violence. The Armenian Ministry of Labor and Social Affairs as well as several women’s NGOs have drafted such laws in the last few years. None of them has been enacted yet.

The Armenian Justice Ministry unveiled a similar bill on Friday. A senior ministry official, Bagrat Ghazinian, said it would seriously curb the practice if passed by parliament.

“In some cases, a violent incident does not technically contain elements of a crime and the police are therefore not legally allowed to do something about it,” said Ghazinian. “Our draft will regulate this issue.”

The women’s rights grouping disagreed, saying that the proposed law is not far-reaching enough. “It doesn’t cover all types of violence,” one of its leaders, Zaruhi Hovannisian, told RFE/RL’s Armenian service (Azatutyun.am). “We need an in-depth conceptual approach to domestic violence and we must instill in the public consciousness the notion that domestic violence is a crime.”