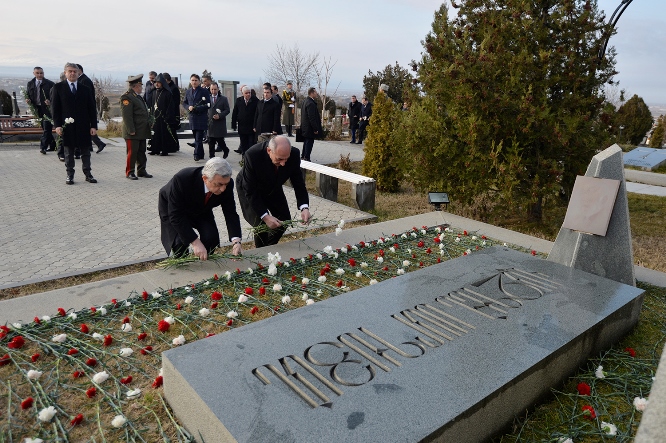 On the occasion of the 26th anniversary of the establishment of the Armenian Army, the top leadership of Armenia and Artsakh, including Presidents Serzh Sargsyan and Bako Sahakyan, Armenia’s Prime Minister Karen Karapetyan, Defense Minister Vigen Sargsyan and other officials, visited the Yerablur Military Pantheon to pay tribute to the memory of Armenians who gave their lives for the independence of the Homeland, reports Armenpress.

The officials laid flowers at the graves of Commander (Sparapet) Vazgen Sargsyan, Commander Andranik and the memorial for the soldiers fallen at the Artsakh war.

The Republic of Armenia and Armenians around the world celebrate the 26th anniversary of the Armenian Army’s establishment on January 28. On January 28, 1992, the Government adopted the “On the Defense Ministry of Armenia” historic decision, heralding the formation of the Armenian Army. In May of 1992, the ministry held the first drafting, laying the foundation for the stable tradition of drafting conscription servicemen to the Army.

President Sargsyan, on the occasion of the 26th anniversary of the establishment of the Armenian Army, handed over posthumously awarded high state awards to the families of soldiers fallen while defending the borders of the Homeland.

The awarding ceremony was held in the Yerebalur Military Pantheon.

“Today we are in Yerablur. On this sacred day it’s our duty to bow our heads to the memory of heroes who gave us life and freedom at the expense of their lives. We share the grief of families and relatives of the fallen soldiers. We call on the generations to always keep their memory alive, the meaning of this important holiday of the Armenian people. Eternal glory to our heroes. Live long the Armed Forces of the Republic of Armenia!”, the President said.