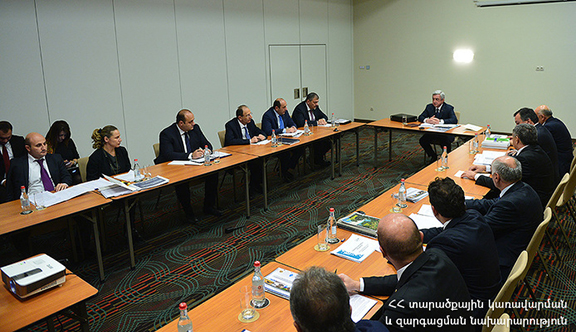 (ArmRadio)— During a recent working visit to Jermuk in the Vayots Dzor province, President Serzh Sarkisian held a consultation with tourism officials where the prospects of tourism development were discussed.

“Despite the positive results registered in the field of tourism, there is still a huge potential,” said Sarkisian said at a meeting with representatives of the relevant state agencies.

He noted that the development of tourism is an “interrelated chain of economic development, where all links should be strong and active to make it possible to achieve a final result.”

“We have to be aware that the field can only develop thanks to combined efforts of all of us,” the President added.

Speaking about the choice of the venue of the consultation, Sarkisian said the “Vayots Dzor province is where the most significant southern route passes. It takes you to spiritual-cultural centers like the Noravank Complex, the Areni caves, Tatev Monastery, Zorats Karer and, of course, to the heroic land of Artsakh.”

According to Sarkisian, “this southern route has the potential of becoming a component of more large-scale regional tourism packages involving Armenia, Iran and Georgia.”

The president also recalled Pope Francis’ visit to Armenia, which was held under the slogan “Pilgrimage to the first Christian nation.” The Pontiff publicly called it a “pilgrimage to Armenia, which, according to Sarkisian, was a positive message that should be built upon.

Referring to other examples, the President pointed to the recovery of the oldest shoe and the most ancient vinery found in Armenia and reminded that the events were widely covered by world media.

Upon the conclusion of the meeting, Sarkisian instructed to set up a tourism council involving representatives of the private sector, international organizations, local self-government bodies and the Armenian Apostolic Church with a view of coordinating the work of the tourism-related state bodies and territorial development agencies.

Based on the principle of balanced development of territories, large-scale projects are being launched in nine cities of Armenia, five of which have already been initiated, the Minister of Territorial Administration and Development David Lokyan said after the meeting in Jermuk, Armenpress reported.

“We are talking about a loan project worth approximately US$50 million, which is provided by the Asian Development Bank for realizing the first stage of the project. The first stage includes the cities of Vanadzor, Jermuk, Dilijan, Tsakhkadzor and Ashtarak. $20 million is planned for development of Vanadzor, $10 million for Jermuk, $6 million for Dilijan, $10 million for Tsakhkadzor and $4 million for Ashtarak. The private sector will also be involved in the works, and we expect this volume to at least multiply in volumes and we will have huge infrastructures, tourism and leisure zones and other attractive projects in those areas,” the minister said.

He said the project will be continuous. The second stage will include another five cities. Gyumri will be part of the project. The minister said the loan project will come into force in September of 2017, after being approved by the Parliament in May-June.

“In addition, the President has been briefed on a new project implemented by us. Russia provided a US$3 million grant to Armenia for solving the issues of village tourism, which will include around 60 village settlements. This project aims at boosting village tourism,” Lokyan said.

According to the minister, one of the priority steps of the abovementioned project will be in Amasia near the Arpi Lake, with the idea of creating a summer and winter tourism center.

“Another part of village tourism will be with city of Stepanavan. Another part might be transferred and realized in Berd, Tavush. The list will be ready in a month. We are being assisted by the UN’s corresponding structure, which helps to select settlements which have prospects of village tourism development,” Lokyan said.