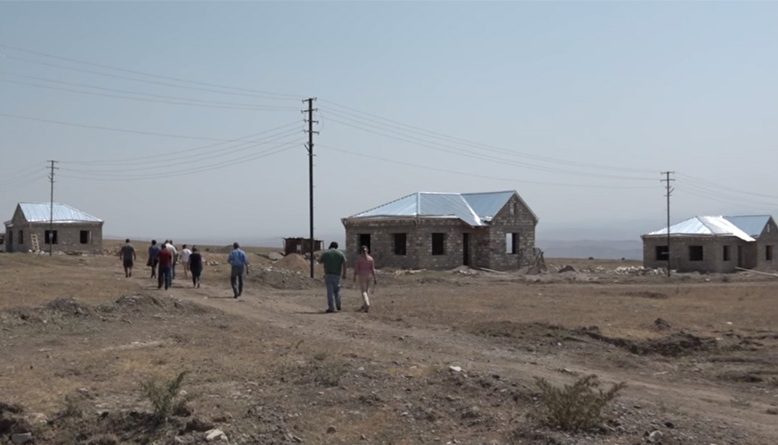 (Armradio) – On September 25, Tufenkian Foundation celebrated its 15th anniversary of working in Artsakh. To mark the occasion, a special event featuring a photo exhibition and a roundtable discussion was organized in Stepanakert. State officials of the Artsakh Republic, representatives of local and international organizations, Diaspora guests, as well as Tufenkian Foundation’s beneficiaries and partners took part in the event.

Founded in 1998 by entrepreneur James Tufenkian, the Tufenkian Foundation was launched in response to the most pressing social, economic, cultural and environmental challenges facing the Armenian society. In 2003, the Foundation broadened its scope to Artsakh, where it has since worked to resettle, rebuild and develop the strategically significant liberated borderlands.

The 15th Anniversary Event was launched with a photo-exhibition that walked guests through the key efforts implemented by the Tufenkian Foundation during the past 15 years.

Following the opening of the photo exhibition, Tufenkian Foundation Executive Director Raffi Doudaklian presented the work of the Foundation since the expansion of its mission to Artsakh.

Summarizing the key accomplishments of the Foundation during the past 15 years, the following figures were presented:

The event was concluded with a roundtable discussion on “Developing and Resettling Artsakh: The Path Forward”. Representatives of the Tufenkian Foundation, other charitable and humanitarian organizations, Artsakh Republic ministries, National Assembly and other government agencies, educational institutions, as well as Tufenkian Foundation beneficiaries and partners participated in the discussion.

The discussion started with reflections on the past 15 years of rebuilding and repopulating Artsakh’s liberated villages: successes were presented, lessons learnt were analyzed and the overall trajectory of implemented actions was evaluated. This was followed with a lively debate on future efforts towards Artsakh’s resettlement and development, focusing on issues such as creating sustainable livelihoods and employment opportunities for re-settlers, attracting newcomers through favorable living conditions, ensuring that educational and healthcare issues are resolved throughout Artsakh and charting a roadmap of strengthening Artsakh’s sovereignity.

Highlighting the importance of continued development of the liberated territories, Artsakh Republic Deputy Minister of Foreign Affairs Armine Alexanyan said “Despite the political situation, we must continue resettling and strengthening Artsakh”.

As a key precondition for Artsakh’s resettlement, provision of employment opportunities for re-settlers and current residents was pointed out. “Without employment, without a way for the villagers to make a sustainable living, the resettlement and development of Artsakh is impossible. We need to have a concrete plan on ensuring employment opportunities for people living here”, said Edik Grigoryan, Head of the Tufenkian Foundation Artsakh office.

The lack of a comprehensive plan on the development of the liberated territories, namely Kashatagh, was another issue highlighted by the participants.

The following key conclusions were outlined as a result of the discussion:

The Tufenkian Foundation plans to utilize the results of the discussion in its future activities aimed at rebuilding, resettling and developing Artsakh’s border villages, while continuing to cooperate with other organizations, government agencies and a range of relevant stakeholders in Artsakh and beyond.