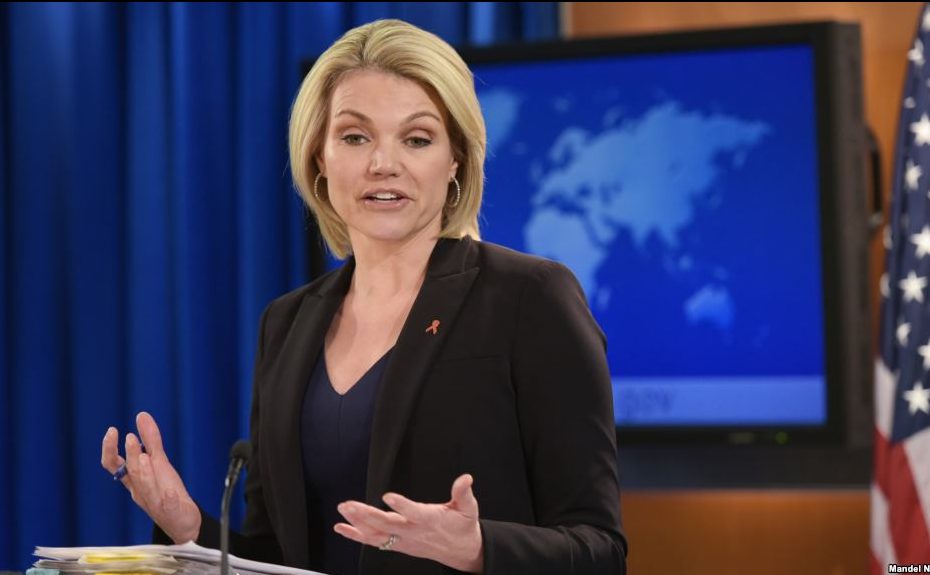 (Azatutyun)- The United States has congratulated Nikol Pashinian on becoming Armenia’s prime minister and said it will “work closely” with his government which will be formed by the end of this month.

“The United States congratulates Nikol Pashinian as the new Prime Minister of Armenia,” a spokeswoman for the U.S. State Department, Heather Nauert, said in a statement released late on Tuesday.

“We look forward to working closely with the new government and with the people of Armenia on the many areas of shared interest between our countries, including increasing trade, working in support of democracy and rule of law, and safeguarding regional and global security,” she said.

Washington has closely monitored recent weeks’ dramatic developments in Armenia that have led to the resignation of Prime Minister Serzh Sarkisian and his replacement by Pashinian, the main organizer of nationwide anti-government protests. The State Department has repeatedly urged Armenia political factions to end the political crisis through dialogue.

U.S. Assistant Secretary of State Wess Mitchell had phone conversations with Pashinian as well as Foreign Minister Edward Nalbandian on April 30. A few days earlier, the U.S. ambassador in Yerevan, Richard Mills, met with Pashinian and then acting Prime Minister Karen Karapetian to try to help ease political tensions in the country.

Pashinian’s election as prime minister was also welcomed on Tuesday by the two main Armenian-American lobbying groups. One of them, the Armenian Assembly of America, sent a congratulatory letter to the 42-year-old protest leader.

“This is truly a remarkable and defining moment in Armenia’s history,” read the letter signed by the Assembly leadership. “We are especially proud of your demonstrated commitment to non-violent, democratic change, which has brought honor to all Armenians.”

The Assembly will continue to urge Washington “to do more to fortify and advance the critical relationship between America and Armenia,” added the letter.

For its part, the Armenian National Committee of America (ANCA) said the peaceful regime change in Yerevan has boosted Armenia’s reputation in the U.S. as a “reliable and democratic partner in advancing shared regional and international priorities.” It has also “sharpened the contrast between Armenia’s progress and the deepening democratic deficits in neighboring Azerbaijan and Turkey,” said the ANCA’s executive director, Aram Hamparian.