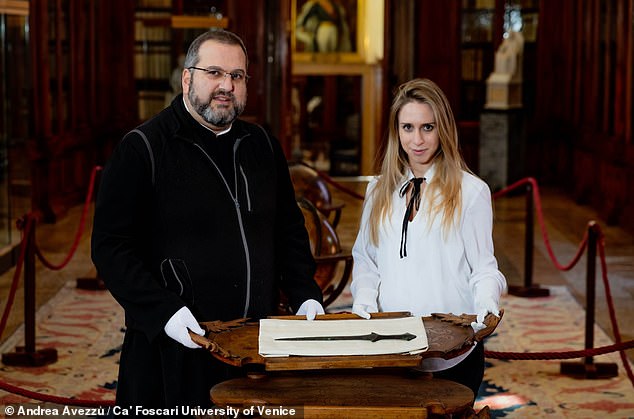 (Armradio, Daily Mail)- One of the oldest swords has been found in a museum on the Saint Lazarus Island, Venice.

The ultra-rare sword, which is around 5,000 years old and doesn’t resemble most ancient weapons in the world, was made around the year 3000BC and came from eastern Turkey.

However, the sword was contained in a cabinet as part of a medieval collection.

It was only when a local PhD student and expert in ancient weaponry noticed the sword that it was removed for further analysis to pinpoint its date.

The sword could have been a ceremonial object or an offensive weapon that was used in combat.

Another hypothesis is that it was part of a burial and was casually retrieved by townsfolk before ending up in a museum.

Vittoria Dall’Armellina at Università Ca’ Foscari in Venice saw the sword in a small cabinet surrounded by medieval items at the Mekhitarist Monastery on the Saint Lazarus Island in the Venetian Lagoon.

The weapon caught the eye of Dall’Armellina, whose master’s degree and Ph.D. included a study on the origin and evolution of swords in the Ancient Near East.

She thought the weapon she had spotted didn’t look like a medieval artifact, but a much older sword, similar to those she had already encountered in her studies.

The Saint Lazarus Island sword turned out to be made of Arsenical bronze, an alloy frequently used before the widespread diffusion of bronze.

It’s believed the sword travelled from Trebizond in Turkey to Venice in the second half of the 19th century.

This is due to an envelope containing a worn-out slip of paper that came with the sword.

The note on the paper, written in Armenian, talks about a donation to Father Ghevond Alishan, a famous poet and writer who died in Venice in 1901.

Ghevond Alishan, who was a friend of English art critic John Ruskin, was born in Constantinople – now Istanbul – and travelled to Venice before his death.

Further studies are being done on the weapon, the history of which is still ‘shrouded with mystery’.