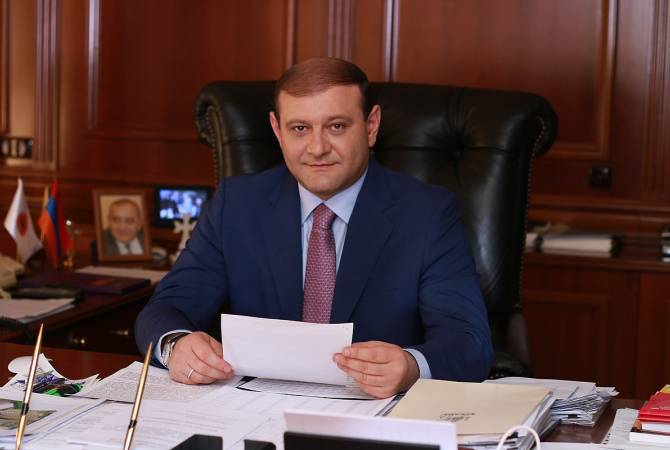 Markarian announced his resignation in a short written address to the city’s residents. He gave no reasons for the widely anticipated move.

“I have tried to listen to each of you and settle the capital’s problems step by step,” read the statement. “I have been committed to my programs and promises.In this regard, I expect the forgiveness of all those fellow citizens with whom I am parting ways.”

The statement came a few hours after Markarian met with members of Yerevan’s municipal council representing former President Serzh Sarkisian’s Republican Party (HHK). The 40-year-old mayor is a senior member of the HHK.

Markarian’s late father Andranik served as Armenia’s prime minister from 2000-2007. The latter headed the HHK until his sudden death in 2007.

Taron Markarian, in office since 2011, came under pressure to step down after mass protests brought down Sarkisian’s government in late April. The protest leader, Nikol Pashinian, took over as the country’s new prime minister on May 8.

Members of Pashinian’s Yelk alliance sitting on the HHK-controlled council have since repeatedly demanded Markarian’s resignation, accusing him of corruption and mismanagement. They have argued, in particular, that he has made a big personal fortune while in office.

Markarian rejected calls for his resignation until now, arguing that the HHK won the last municipal elections held in May 2017. He was the party’s mayoral candidate in those polls.

The pressure on Markarian grew in mid-June when the National Security Service (NSS) searched the offices of a municipal fund supervised by him. The Yerevan Fund’s executive director and another municipal official were detained on suspicion of extorting hefty payments to the charity from individuals seeking construction permits from the mayor’s office.

The embattled mayor has not been seen in public for the last two weeks. A Yelk councilor claimed on June 27 that Markarian signed a letter of resignation “two or three days ago” but will not publicize it for now. The municipal administration implicitly denied that.

Under a law on local self-government in Yerevan, the city council has to elect a new mayor within a month. It is not yet clear whether the HHK majority in the council will nominate a mayoral candidate.

Football legend Ronaldo to join Match of Legends in Armenia