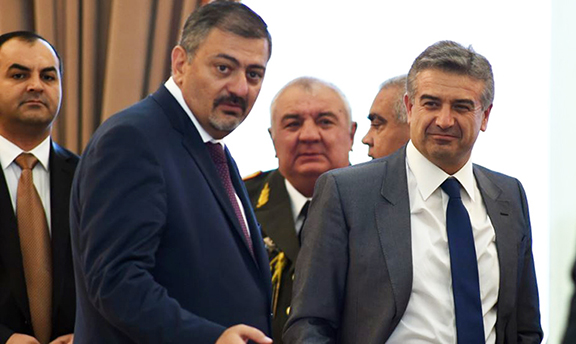 Gabrielian commented on the newly appointed Prime Minister Karen Karapetian’s remark that “systemic changes” are required to improve what he called a “very grave” economic situation in the country.

“In my view, Mr. Karapetian stressed that the previous development resource is exhausted and new approaches, new resources are needed for ensuring further growth,” he told journalists.

Karapetian’s gloomy assessment contrasted with official statistics showing that annual economic growth in Armenia averaged 4 percent from 2010-2015 and continued into this year, despite knock-on effects of a recession in Russia.
“It’s not that there has been no economic growth,” explained Gabrielian. “It’s not that [official growth] figures are not real. We are talking about a model of development that has existed until now and are saying that we need a new approach that will be presented by the prime minister soon.”

Gabrielian declined to elaborate on the “systemic changes” prioritized by Karapetian. He said that the premier will detail them when he submits his policy program to the Armenian parliament for approval after forming his cabinet.

Only six members of the new cabinet, including Gabrielian, have been appointed by President Serzh Sarkisian so far.
Commenting on his economic priorities on the parliament floor on September 14, Karapetian put the emphasis on making it easier for entrepreneurs to do business in Armenia. The former business executive also said he is “very determined” to combat widespread tax evasion.

Karapetian mentioned the kind of reforms that have long been advocated by the International Monetary Fund and the World Bank. The latter have also been urging the authorities in Yerevan to ensure fair competition.