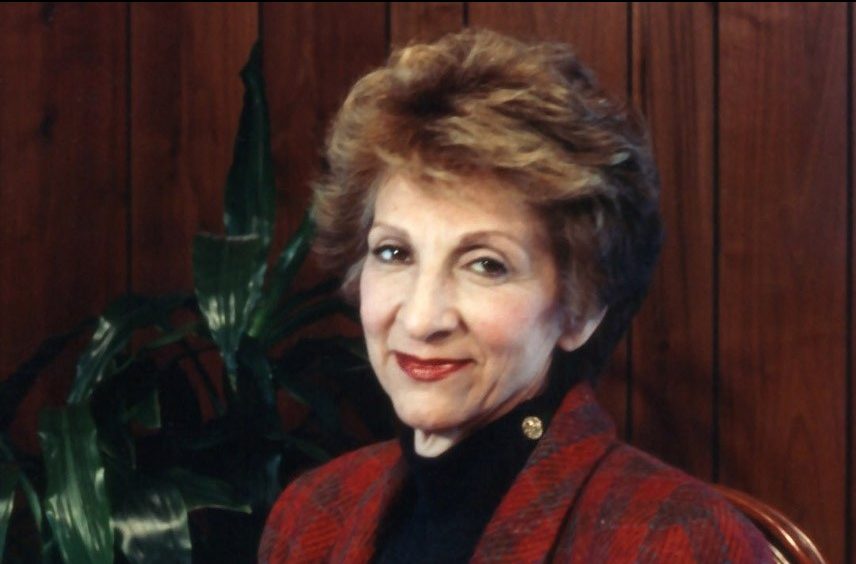 Louise Manoogian Simone passed away at the age of 85 on February 18, 2019. She dedicated her life to civic leadership, philanthropy, and was first and foremost passionate about the promotion of Armenian culture and heritage

Louise was born in Detroit, Michigan to Alex and Marie Manoogian. Her father Alex, an Armenian immigrant who left Turkey after the Armenian Genocide, developed the Delta single-handed faucet and went on to become one of America’s leading industrialists as the founder of MASCO corporation. Upon achieving business success, Alex used his resources to work tirelessly for the benefit of the Armenian people worldwide.

Louise followed in her father’s footsteps and serve on the board of the Armenian General Benevolent Union (AGBU). In 1982, she made her first trip to Armenia, then still a Soviet Republic. Over the next few years, she returned frequently, bringing others with her, whether it be to make documentaries or to connect and contribute in other ways.

In 1988, after a devastating earthquake hit Armenia, killing 25,000 people and leaving hundreds of thousands wounded and homeless, Louise was on the first U.S. cargo plane delivering relief supplies and rescue teams to the disaster area. She spearheaded the disaster relief on behalf of AGBU.

In 1989, Louise was elected the international president of AGBU and began directing operations in 31 countries and 74 cities and oversaw the building of and continued funding of schools, churches, scout programs and services for Armenians worldwide. She opened an office in Yerevan, Armenia and when Armenia became an independent country, Louise through AGBU and her own resources focused efforts on rebuilding a newly independent homeland. She was a charter board member and major benefactor of the American University of Armenia in Yerevan.

In 2002 Louise retired as President of AGBU. However, she continued her charitable efforts through the Manoogian Simone Foundation working with, among others, the Armenian Apostolic Church, reconstructing and maintaining hospitals, schools, children’s and cultural centers and historical monuments.

Though she was most passionate about Armenian causes, Louise was also a great benefactor to American Universities, Museums and cultural institutions, including the University of Michigan, Wayne State University and the Detroit Institute of Arts. She received many honors throughout her life, among them the Ellis Island Medal Of Honor.

She is survived by a brother, three children and two grandchildren.