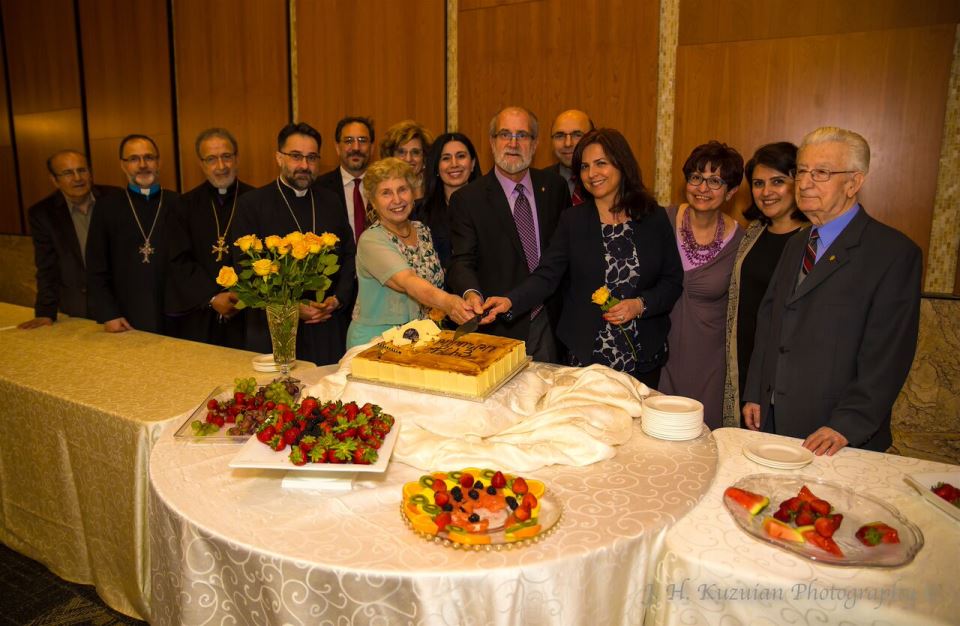 Toronto Armenian community representatives and readers of TorontoHye newspaper came together on May 19th to celebrate the achievements of the paper during the past 12 years.

Founded in October 2005 and published uninterruptedly ever since by the Armenian Community Centre, TorontoHye is the main publication serving the greater Toronto area Armenian communities. The fundraising event that was held at the ACC’s main hall was attended by community leaders, clergy, representatives of the community organizations, artists, advertisers, supporters and faithful readers.

Master and mistress of ceremonies Varak Babian and CP24 reporter Arda Zakarian conducted the program expertly with colorful introductions of the various participants. A video presentation featuring readers from different walks of life and ages gave their personal accounts about the newspaper and highlighted the important part it plays in the community.

TorontoHye’s founding editor Karin Saghdejian-Deragopian presented a detailed report about the paper’s 12 years of publication and showed how the paper reflected the defining moments of the community during that time. She also thanked the contributors, advertisers, supporters and the Armenian Community Centre’s leadership for their cooperation and continuous support. The engaging presentation was interspersed with interesting backstories and happenstances related to the publication of some of the 139 issues. Be it a letter from the only Armenian resident of faraway Penticton, BC, an email from the legendary AP photographer Harry Koundakjian with a batch of historic photos, or a midnight adventure to deliver the files to the printing house in Toronto amid sub-zero temperatures and chronic road closures, it relayed the interesting and adventurous side of publishing a newspaper.

She also announced the launch of the newly designed website (torontohye.ca) which will provide coverage of community events and activities as well as major news and analysis related to Armenia and the diaspora. The website is designed by Digilite Web Solutions (a Toronto based web design company) and managed by Talyn Terzian Gilmore.

Keynote speaker prof. Isabel Kaprielian Churchill spoke about the important role Armenian newspapers have played in the life of diasporan communities since the publication of the first Armenian newspaper Aztarar in Madras, India in 1794. Speaking about TorontoHye, Dr. Kaprielian Churchill said the newspaper shines a light on our community life and shows the dynamism of its organizations and institutions. It both reflects the values and ideals of our community and is a vanguard of molding and guiding our values as our communities face big challenges around the world, she said.

Dr. Kaprielian Churchill added that TorontoHye is an effective agent of group cohesion, maintaining our identity within the broader Canadian society, and it has also helped to integrate newcomers to the community such as during the recent influx of Syrian Armenians.

TorontoHye contributor and Hamazkayin Klatsor chapter chairperson Tamar Donabedian Kuzuian reflected on how a newspaper can incite interest and educate us from an early age and shape our understanding of the world around us. She emphasized the significance of TorontoHye as a forum for community activities for over a decade.

Local ARF leader Hagop Janbazian stressed the importance of maintaining the newspaper that gives opportunity for all community organizations and associations to disseminate information and announce their activities. He thanked the founding team and presented the editor Karin Saghdejian Deragopian and graphic designer Ara Ter Harutyunian with photographer Scout Tufankjian’s book “There Is Only The Earth”. The evening came to an end with a cake cutting ceremony and meet and greet among the guests and attendees. TorontoHye team with the participating musicians