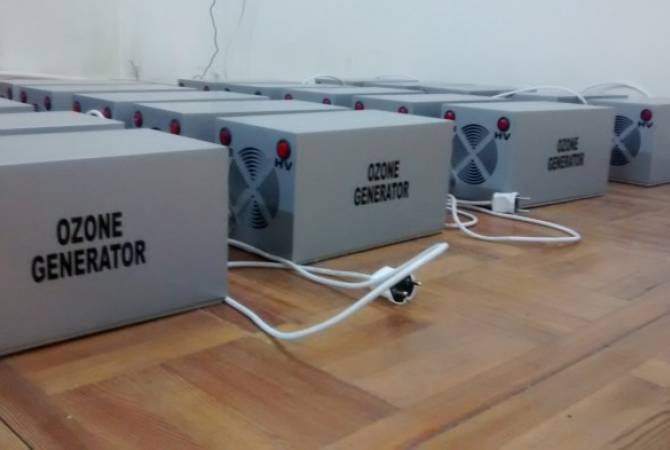 ARMENPRESS. Armenian scientists at the Alikhanian National Science Laboratory headed by Ani Aprahamian have developed an ozone generator that can sterilize areas of up to 140 cubic meters every hour.

“Generally, our lab doesn’t do such work, but because of the coronavirus and the state of emergency we decided to do something. And we concluded that the best thing would be to develop something that would sterilize,” Aprahamian told ARMENPRESS.

Aprahamian says she recalled the idea of an ozone generator from a conversation she had with a Diaspora-Armenian doctor, whom she contacted in Armenia and after improving the design they launched the development.

Ozone is harmful to breathe, that’s why the generator must be placed in an empty room when switched on.

When Aprahamian’s team developed the prototype, the Ministry of Healthcare of Armenia dispatched specialists to review it, and after approval it requested 20 devices.

Comparing to similar generators made in China, Aprahamian says her team’s development turned out to be “something on an average quality”. “The cost of materials per unit totalled 42 thousand drams, and we did the work for free,” she said, adding that they can sell a unit somewhere between 60 to 80 thousand drams.

The 20 units were made by Aprahamian’s 8-man team, mostly by hand, in ten days.

“If the production were in a plant, it would’ve been much easier, assembling by hand is a pretty difficult job,” she said.

Now, they are discussing potential manufacturing with the Engineering Town.

Meanwhile, the Ministry of Healthcare spokesperson Alina Nikoghosyan said the 20 ozone generators they bought will be used in different hospitals.