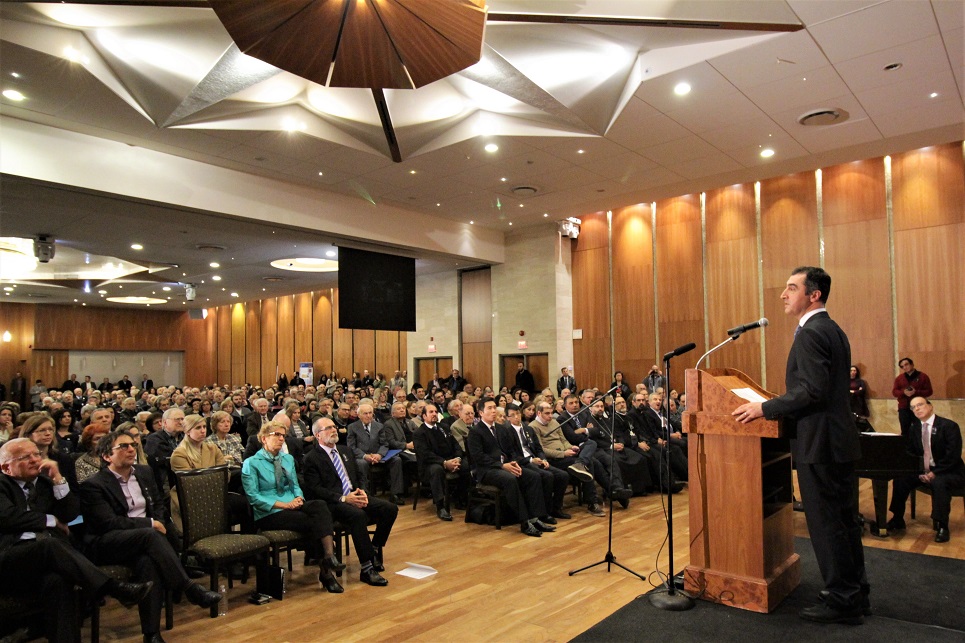 TORONTO, Canada—Over 600 people gathered at the Armenian Community Centre of Toronto on January 22, 2017 to commemorate the 10th anniversary of the assassination of Hrant Dink, the prominent Turkish-Armenian journalist and Editor-in-Chief of the bilingual Agos newspaper.

Dink was assassinated on January 19, 2007, in front of his newspaper’s office in Istanbul, triggering an unprecedented surge of solidarity and pro-democracy activism in Turkey after more than 100,000 people attended his funeral. Hrant Dink’s assassination is now memorialized in the Canadian Museum for Human Rights in Winnipeg.

The keynote speaker was Cem Özdemir, a German parliamentarian of Turkish descent and the current co-chair of the German Greens Alliance Party. Özdemir spearheaded the resolution in the German Bundestag to formally classify the 1915-1923 massacres of Armenians in the Ottoman Empire as genocide.

Prominent politicians, diplomats and public figures were also in attendance for the commemoration, including the Premier of Ontario, Honorable Kathleen Wynne, Consul General Peter Fahrenholtz of the German Consulate in Toronto, famed Canadian-Armenian director Atom Egoyan, as well as local members of the Canadian Parliament and Ontario Legislature.

In his keynote address, Özdemir spoke of Hrant Dink’s bravery and his continued legacy.

Furthermore, Özdemir revisited throughout his address the theme of reconciliation between Armenia and Turkey, and realized the importance of Turkish society embracing the ethnic and religious minorities of their country to allow for this. A significant change, he opined, would be for Turks to disavow the masterminds of the Genocide, who are revered to this day by some for being leaders of the once-powerful Ottoman Empire, despite the fact they oversaw the murder of their own citizens through genocide.

“You have children, I have children and we want our children to be good people and good citizens. Christian, Jews, Muslim or Atheist, whatever we are, we want that. So when you talk to your children, do you not talk about role models, and people you want your children to look up to and maybe take them as examples? I don’t tell my children follow the path of people that betrayed their neighbours… So I ask you: who is a better Muslim, one who looks aside when Armenians are killed, or the one that says ‘attacking an Armenian is like attacking me? Killing them is like killing me,’” said Özdemir when recounting his discussion with a group at a Turkish mosque in Berlin.

In her speech to attendees, Wynne expressed her gratitude to Özdemir for being present and the need for continued discussion about the Armenian Genocide. “I wanted to be here today to honour Hrant Dink. Even though it’s been over 100 years since the Armenian Genocide began, the passage of the century has not dulled the horrors of those events. As we remember Hrant Dink, we also remember those Armenians who perished,” said Wynne.

Zohrab Sarkissian, the Chair of the Armenian National Committee of Toronto, commented that Dink continues to serve as an example for activism on issues that beleaguer society today.  “Today, Dink has become an exemplary icon of freedom and human rights activism in Turkey, across Europe and across the world. Dink’s memory serves as a constant reminder for intellectuals, activists and the wider public to challenge prejudice and division among people, such as the rising tide of intolerant nationalism in Turkey.”