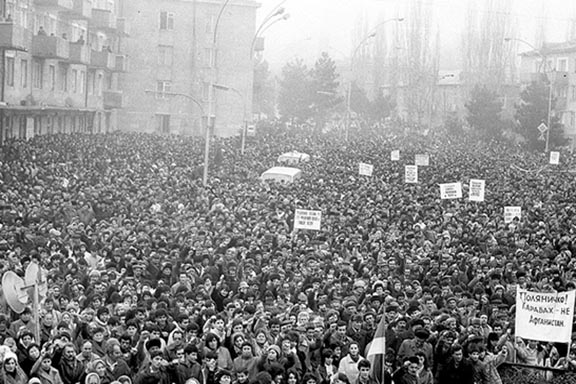 “We join with Representatives Pallone, Schiff, Speier, and Valadao in marking Artsakh’s 30th anniversary of the independence movement, celebrating – along with friends of liberty from across the United States – this very American story of a free people’s victory over foreign rule,” said ANCA Executive Director Aram Hamparian. “We look forward, in the days and weeks ahead, to continuing our robust cooperation with these legislators and each of their House and Senate colleagues on the full array of Artsakh-related public policy priorities before the U.S. Congress – from the FY19 appropriations bill to the Royce-Engel peace proposals and the U.S.-Artsakh Travel and Communication Resolution.”

Congressional Armenian Caucus co-founder Frank Pallone, who has taken multiple trips to Artsakh over the past two decades, shared how he describes the progress of the Republic to his colleagues. “First thing that we tell [Members] in the Congress […] is about Arstakh being a democratic country, and a country that uses the rule of law. The second thing we talk about is your right to self-determination and the fact that under the Soviet Constitution – I can’t believe that I am mentioning the Soviet Constitution but I do – but under the Soviet Constitution you were an oblast and that you have the right, pursuant to referendum, to determine your own future and become an independent country.”

“The people of Nagorno-Karabakh share the dream of the most basic right that any person can hold, that of self-rule and self-determination,” explained Rep. Speier, who pledged to visit Artsakh in 2018. “America stands in support of those same principles — principles we hold so dear to our own country and are the cornerstones of our great democracy.”

Rep. Valadao, who championed an amendment last year to ensure continued U.S. support for Artsakh demining efforts, noted, “thirty years ago, the people of Artsakh started a movement to become the first truly democratic process in a Soviet state. And because of it millions have attained long cherished freedom and human rights. We have a saying in America that, ‘Freedom is never free.’ Unfortunately, your freedom had to be defended on a battlefield and came at a high price. You were forced to abandon your home and leave loved ones behind.”

“The people of Arstakh courageously raised their voices for freedom and against Soviet communism and ethnic intolerance,” stated Rep. Schiff. “While Arstakh’s path forward has not been easy, the trials of the past did not break their determination.”